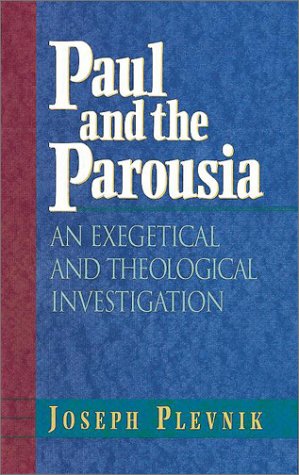 Paul and the Parousia: An Exegetical and Theological Investigation

The return of Jesus is very much on the agenda of contemporary theology, and rightly so since it was highly significant for Paul’s perspective on the Christian life. We have good reason, therefore, to be grateful to Plevnick for producing this volume that has its origins in the author’s 1971 doctoral dissertation, but has been thoroughly revised and reworked.

The book is divided into two parts. Part one, which forms the bulk of the book, is exegetical in character, while the shorter second part develops the theological aspects of the subject. Plevnik first examines Paul’s concept of the parousia, tracing it deep in the literature of Jewish apocalyptic, and challenging the view of A. Deissmann and E. Peterson that it draws on the visits of Hellenistic rulers. A full discussion of the Day of the Lord in the OT and Jewish apocalyptic writings is followed by brief treatments of ‘apocalypse’ and ‘epiphany’. Since Plevnik assumes a limited authentic Pauline corpus, readers find only fleeting references to this latter term.

His detailed discussion in chapter two of the imagery associated with Jesus’ return is helpful. Plevnik identifies numerous parallel passages in both the canonical and non-canonical Jewish writings that illuminate the language found in 1 Thessalonians, bringing out its theological significance.

The thorough exegetical chapters provide helpful analyses of 1 Thessalonians 4 and 5, 1 Corinthians 15, and Philippians 3:20–21. Throughout these chapters, Plevnik interacts frequently with contemporary scholarship. He also maintains a helpful emphasis on the pastoral impact of these passages on the communities that received them.

Part two draws on more of the Pauline material, examining the relationship between the Parousia and themes such as hope, judgement and the church. These theological essays are generally more accessible than the first part of the book, and many readers may wish to begin here in order to get their bearings before launching into the close exegesis of the earlier chapters. There is much valuable material to be found here.

Plevnik presents Paul as one who anticipated the return of Jesus in his own lifetime. While Paul does indeed speak of the Parousia with great urgency, it is not at all clear that Paul was as convinced of Jesus’ imminent return as is often assumed, as Ben Witherington has argued. It is unfortunate that Paul’s rejection of date setting is so easily played down in this regard. In a study that seeks to do justice to the nuance in Paul’s thought, it is a pity that Paul is not credited with a little more caution.

Greek and Hebrew scripts are used throughout the book. These are normally transliterated and translated on their first appearance, but not thereafter.

This pattern is not always followed consistently, however, which may prove frustrating to readers without Greek and Hebrew. (See, for example, the Hebrew in note 22 on p. 8, and the Greek on p. 13 which is transliterated but not translated.) There are a number of typographical errors, particularly in the biblical languages. It is particularly unfortunate that the Greek form of the key theological term in the book’s title is spelled incorrectly on the very first page of text!

This is a demanding text which the beginning student will probably find heavy going. However, it is also a text which emphasises the theological and pastoral importance of this theological theme, while providing an antidote for the reader against the excesses of millennial expectations as we approach the year 2000. It is to be welcomed as an important contribution to the discussion.