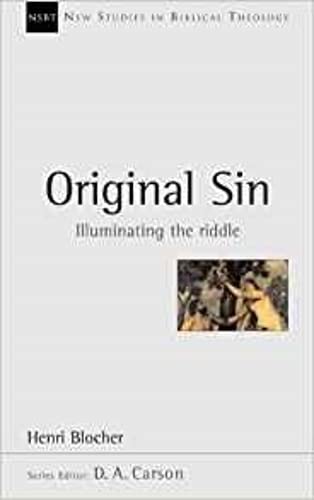 This is an important book, but not an easy one. It is important because belief in original sin is widely ignored or derided by the liberal establishment and apparently taken with little seriousness even in some areas of biblical Christianity. How often in ethical argument, for example, have you observed the simple slide from, ‘This is how I am’, to ‘This is how God made me’—as though no structural fault-line ran through the whole of humanity? It is important also because it is thoroughly up-to-date, by a writer who is not only learned in both biblical and theological disciplines but also conversant with the contemporary literary field. Written always with courtesy, it shirks none of the weighty objections to the doctrine, and succeeds in presenting an apologetically-edged restatement, including in part a fresh interpretation of Romans 5.

The book packs a great deal into its pages. The text is too content-rich to read fluently, and although translation and explanation are always provided, at times it assumes a depth of theological culture not always possessed by students and pastors in the UK (cf. the note on p. 85, ‘The reader will easily spot here a “neo-Calvinistic” orientation, with allusions to … Van Til … and Dooyeweerd’; would that more of us could do so!). Yet is supremely worth sticking with, and even wrestling with. In my judgement, it is far the most significant volume in the series ‘New Studies in Biblical Theology’.

The first chapter seeks to show that the element of a doctrine of original sin are more plentifully and widely distributed in Scripture than is often claimed—that is, a sinfulness which is universal, natural (whose ambiguity in content Blocher recognises: ‘Sinfulness has become our quasi-nature while remaining truly our anti-nature’), inherited and Adamic. The two central substantive chapters deal respectively with the Genesis account and Romans 5. Professor Blocher burkes no challenge, concluding that it does not prove overly difficult to fit Adam, as the first ‘theological man’ and the progenitor of (homo) sapiens sapiens, into the schemes of palaeoanthropology. Our author is an undoubted expert in this apologetic territory, as his In the Beginning. The Opening Chapters of Genesis (IVP, 1984) demonstrated. Readers tempted to scepticism should first take the measure of this serious and sensitive case.

The chapter on Romans 5 has to be read with a New Testament (preferably Greek) open beside one. Blocher is uncomfortable with both dominant interpretations (broadly Pelagian and Augustinian), rejecting their common assumption that either we are condemned for our own sins (and Adam is little more than fountainhead) or we are condemned for Adam’s sin (by the imputation of his sin to all the race, which Blocher argues is not explicit in Romans 5). Adam’s experience established the sin-death connection, and so paved the way for death to be inflicted on all subsequent sinners as penalty for their sins—because all of us are related to Adam as natural and legal head. This is a suggestive reading of the Pauline text, by which criterion alone it should be assessed.

The final chapter draws out some of the implications of this departure from the traditional federal or Augustinian position. I found the exposition profoundly satisfying. It is advanced with modesty, and with no claim to dissolve the riddle or mystery of original sin. Herein lies some of the attractiveness of this honest, sharply argued essay in biblical theology. Very highly commended.