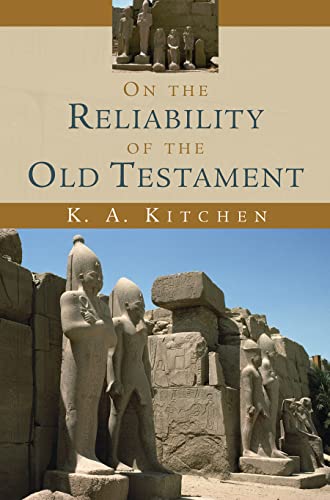 ON THE RELIABILITY OF THE OLD TESTAMENT

I will not be the only Themelios reader whose undergraduate struggles with the ‘Documentary Hypothesis’ were considerably aided by Kenneth Kitchen’s Ancient Orient and the Old Testament (1966). Now, in the context of a more fundamental scepticism towards the OT Kitchen again uses his expertise in matters ancient near eastern to provide a robust defence of the reliability of the biblical text.

Kitchen starts with the periods for which we have the most data, i.e., the divided monarchy and the exile. Here, the names, sequences, and chronologies of Hebrew and foreign kings in the biblical and non-biblical records closely agree. Moving back, Kitchen is unmoved by the lack of non-Israelite references to Saul, David or Solomon. The Assyrians had no involvement with Israel before 853 BC, while Egypt named only those nations with whom it had treaties. However, external evidence for David lies in the references to Byt-Dwd in the Tell Dan and Mesha stelae, and possibly ‘the heights of Dwt’ in an inscription of Shosehnq I.

In general, however, Kitchen presents ‘implicit evidence’. This means not only that the details of the text fit the period in which they are set, but that they also fit that period better than any other, examples include the customs reflected in the patriarchal narratives, and the nature of David’s ‘mini-empire’. Particularly important is Kitchen’s analysis of the Sinai Covenant, which some older scholars dated to the Mosaic period due to its similarities with late second millennium Hittite treaties. Such attempts were criticised for ignoring parallels with later Assyrian treaties. However, after tabulating all the relevant material, Kitchen concludes that the closest parallels are with the Hittite corpus: the Assyrian treaties lack historical prologue, covenant blessings, or reference to the deposition of the text (283–89). Kitchen’s argument is cogent, though note McConville’s more cautious remarks in his recent commentary on Deuteronomy (24).

Regarding the exodus and settlement, Kitchen prefers a late chronology, c. 1250 and 1210–1042 respectively. This assumes considerable overlap among the judges, but, he argues, the same applies to an early dating. The supposed contradiction between Joshua (‘total conquest’) and Judges (‘partial conquest’) he sees as resting on a misreading of the former; what Joshua describes is the destruction of key cities, but not their occupation (cf. Josh. 23:4–5).

Sometimes Kitchen skates rather quickly over certain issues. On the notorious crux concerning the dates of Hezekiah’s reign, Kitchen believes that he was king from 715–687/686, but co-regent from 728 (29); a fuller discussion here would have been welcome. His treatment of the exilic period is also somewhat thin; a single sentence suffices to equate Cyrus with Darius the Mede (74). However, to defend every part of every argument would be impractical in an already substantial book.

Clearly this is not a book to read from cover to cover; some may find the wealth of detail quite intimidating. Each chapter is helpfully summarised, however, and readers at different levels should be able to find what they need. This is a valuable resource both for students facing the minimalist gauntlet and for those teaching OT history.