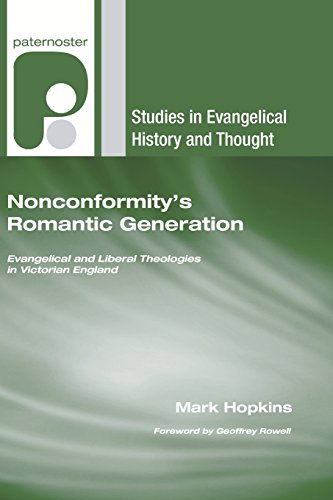 This book is an attempt to paint a theological portrait of a key phase in the history of the English Free Churches. Dr Hopkins approaches his task by describing the theological developments in the thought of four leading Congregationalist and Baptist Ministers, together with an analysis of the two major conflicts that occurred in these denominations. He explores some of the tensions in nineteenth-century Nonconformity between theological liberals and conservative evangelicals. Issues that raised particular challenges in this period included the new critical study of the Bible that originated largely in Germany and the issues that were raised by Darwinian evolutionary theories about human origins. The backdrop to the discussion is the influence of Romanticism, a movement in which moral and ethical concerns took a greater priority than religious dogma. Throughout this era there was a pervasive and optimistic view of humanity’s progress, together with increasing criticism of the penal substitutionary understanding of the atonement, which was at variance with traditional Christian views about heaven and hell.

The Congregational Ministers who were selected were James Baldwin Brown and Robert William Dale. Brown was the most prominent and influential of the theologically liberal Congregational ministers in the period under discussion. He believed that ‘The great question now is not what to believe, but how to live up to the true standards of life’. The issues raised in the Leicester conference controversy by the promulgation of views, such as those held by Brown, revealed that Congregationalists had no answers to assist in maintaining communion in their ranks between people holding increasingly divergent theological opinions. Dale, by contrast, argued for the ideal of a theological system and acknowledged that a grounding in Calvinistic theology had been a good base on which to build a new framework of belief. Dale’s pre-eminent work, The Atonement, was praised across denominational boundaries as a model of constructive theology, enabling him to be esteemed as the most influential Congregational minister of his generation.

The Baptist leaders chosen were Charles Spurgeon and John Clifford. It is evident that Spurgeon was as committed to Reformed theology and the substitutionary understanding of the atonement as Brown was opposed to its retention. Although Spurgeon did share the more experiential approach to authority in religious matters, he differed markedly from many contemporaries in his refusal to allow any relativising of the authority of the Bible. It is probable that the influence of Spurgeon prevented the level of departure from conservative evangelical thought in Baptist ranks that occurred amongst English Congregationalists. In fact Dr Hopkins could have strengthened his case on this point by noting the influence of Spurgeon on Baptist communities in the English-speaking world through the placement of his ministerial students, a factor as important as the phenomenal distribution of his printed sermons. John Clifford, Spurgeon’s friend and colleague, by sheer force of personality and his focus on the social application of the gospel also rose to a position of influence in Baptist ranks. His writings were substantial in quantity, but of little appeal outside the circles in which they were first preached. Clifford’s vision for ministry was significantly different to that of Spurgeon. Hopkins states that ‘it was such an accentuation of working for this world as to marginalize completely working for eternity’. This is an excellent study of a crucial period of Nonconformist history.