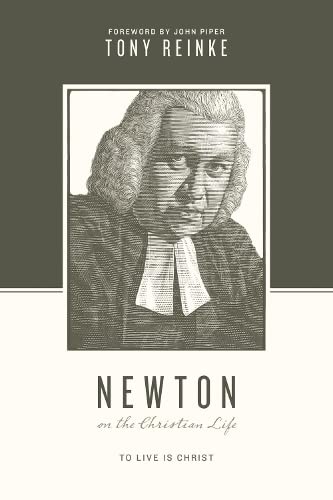 Newton on the Christian Life: To Live is Christ

Charles Spurgeon once observed, “A man’s private letters often let you into the secrets of his heart” (The Sword and Trowel [London, United Kingdom, 1868], 108). If this aphorism carries an ounce of veracity, Spurgeon would certainly have recommended Tony Reinke’s spiritual biography on John Newton. Newton on the Christian Life, one of the latest additions to the Theologians on the Christian Life series edited by Stephen Nichols and Justin Taylor, is an alloy of precious truths excavated from hundreds of Newton’s letters, sermons, and hymns. Consequently, Reinke is confident he has captured the voice of “the old African blasphemer,” for “through all of these letters Newton still speaks” (p. 23). Reinke successfully demonstrates that the man touted as one of the greatest letter-writers of all time was a theologian in his own right. “He was, and remains, one of the church’s most perceptive and practical theologians on the Christian life” (p. 27). As a staff writer and researcher at desiringgod.org, the author exercises proficiency in compiling information and delivering theological motifs in an organized and devotional style. Reinke’s depiction of Newton is certainly more hagiographic than, for instance, Carl Trueman’s Luther on the Christian Life (Wheaton, IL: Crossway, 2015). Still, the reader must remember that Newton authored the famous hymn “Amazing Grace” and not Bondage of the Will. Newton’s life and thought demand a more devotional biography.

Reinke is unequivocal in his estimation of Newtonian theology: “What I have found is that at the core of his pastoral theology radiates the all-sufficiency of Christ” (p. 30). This premise is unmistakably the central motif of the book. Newton consistently juxtaposes Christ’s all-sufficiency with sinful imagery like broken cisterns, “Mr. Self,” and fleshly powers that blind the sinner from “beholding Christ” (pp. 240, 249, 75). The all-sufficiency of Christ is also a natural corollary to “the all-in-all-ness—of Christ,” another ubiquitous theme (p. 51). Like Newton’s ministry, this book is imbued with Christology. In fact, the glory of Christ is so integral to Newton’s biblicism that Reinke identifies it as his “hermeneutical key to understanding the entire Bible” (p. 215). Therefore, the subtitle, “To Live is Christ,” could not be more apropos for a former slave trader-turned-abolitionist whose conversion was as dramatic as the storm that nearly claimed his life in 1748. The author presents gospel simplicity as the “essence of the Christian life” for Newton. Keeping one’s eye simply upon Christ and looking to his person and work, the sinner is freed from the deadly complexity of sin (p. 72).

For Newton, the grace of the cross was not simply amazing. It was the “sufficient grace” typified in 2 Corinthians 12, perhaps his favorite text (pp. 42–43). According to the pastor from both Olney and London, the series of “marvelous mercies”—not self-examination—was “the key ground for genuine Christian assurance” (p. 221). Hence, Newton described “the greatest Christian in the world” as the man of faith refined by these trials (p. 105). Newton himself knew them well. After all, the majestic hymn “Amazing Grace” wasn’t just biographical of David; it was also autobiographical.

In the foreword, John Piper praises Reinke’s ability to capture the tenor of Newton’s writings: “the voice of Tony Reinke and the voice of John Newton have become almost indistinguishable” (p. 15). Such a laudatory description is indicative not only of Reinke’s aptitude as a writer/researcher but also of his purpose for this book. Newton on the Christian Life is incisive not just for its history, but for its spirituality as well. The heart of John Newton is on full display. The author achieves precisely what the editors of this series set out to accomplish in presenting “perspectives from the past” (p. 13). However, if the voice of John Newton sounds too much like Tony Reinke, it may simply be Reinke behind the curtain. Despite the author’s adequate citations, there are several occasions when Reinke appears to be speaking for Newton, not as Newton—indicated many times by a single footnote underlining a page of commentary. Again, due to the purpose of this book, Reinke should be given more latitude. As a spiritual biography, more explanatory width is needed.

Never does the author over-embellish Newton’s strengths. At one point, Reinke even questions Newton’s lack of pneumatology in his ministry (p. 51). For the sake of Christian piety, it serves as a worthy critique in a book perfectly engineered for church devotionals. Apart from its spiritual cardiology, perhaps what makes this work so suitable for mass audiences is its natural flow of thought and Reinke’s ornately simple prose. His willingness to articulate theological truths in imaginative ways struck me as very Piper-like. Perhaps my only substantial critique concerns Reinke’s own criticism of Newton regarding God’s delight over his children (pp. 260–61). While I agree that Newton could have discussed this theme with more frequency in his writings, offering the doctrine of limited atonement as a solution does not coalesce with a pastor who preferred the theology of Andrew Fuller and who likened his use of Calvinism to diluting sugar in tea (pp. 25–26). These small exceptions aside, Reinke’s spiritual portrayal of John Newton leaves the reader with an increased love of Christ, conviction of one’s sinfulness, and a sense of one’s utter dependence upon the grace of God. Newton on the Christian Life is devotional history I would recommend for any scholar, pastor, or Christian.

Obbie Tyler Todd is pastor of Third Baptist Church in Marion, Illinois, and is an adjunct professor of theology at Luther Rice College and Seminary.