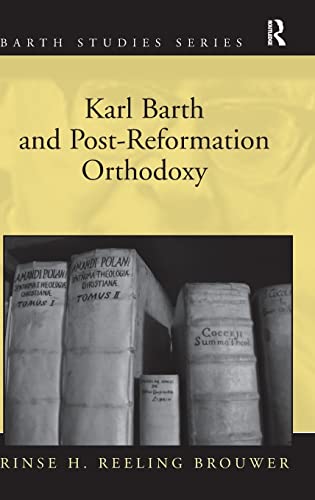 Amongst proponents of Reformed and evangelical theology, Karl Barth is often touted as an outsider, someone proposing a theology alien to their tradition or, at worst, as an enemy to their theological principles. For the latter, the prevailing issues often center on Barth’s doctrine of Scripture, his creative reworking of the doctrine of election, and, at times, his theological interpretation. While the former may echo similar concerns, it is Barth’s use of the post-Reformation orthodox writers that is often criticized (covering a period of thought from around 1560–1710). As the critique goes, Barth was too removed from the actual source material of this particularly creative and broad period of Reformation theology, and his reading of this material through secondhand collections gave Barth a misguided notion of Reformed thought (that he, as the critique goes, unwisely followed in the development of his own theological system). The main culprits for this (perceived) confusion are the texts that became known simply as “Heppe” and “Schmid,” which are volumes of excepted texts covering Reformed and Lutheran dogmatics respectively. Barth himself recalled the discovery of these texts in 1924 as he prepared to teach a course on dogmatics (eventually given under the title “Instruction in the Christian Religion”). This course in Christian theology was published as The Göttingen Dogmatics, and serves as a helpful introduction to Barth’s early thinking. This work is, in McCormack’s words, a kind of “Sentence Commentary” in the vein of medieval works on Lombard, but now on Heppe. It is not surprising, given this claim, that many would see Barth’s reliance upon Heppe as a crutch rather than a true reliance and meditation on the Reformed orthodox writers.

If Barth’s primary engagement with the orthodox writers of the Reformed tradition, whose project he can be seen as expanding and developing, is through a sourcebook, then this is a devastating blow to the claim that Barth was working within this tradition (in any meaningful sense). The question of Barth’s sources then, is an important one, considering Barth’s acceptance and critique of various thinkers from this era. Brouwer’s work is an attempt to give an account of Barth’s use of thinkers from this era, assessing how often and in what ways Barth engaged this strand of the tradition. To begin, Brouwer offers a detailed description of Barth’s own holdings. This was particularly telling. From the time he came across Heppe in 1924, Barth already owned Ursinus’s Summa Theologiae, Witsius’s De Oeconomia Foederum, and Burman’s, Synopsis Theologiae Dogmaticae. From then on Barth continued acquiring Reformed and Lutheran dogmatic primary texts into the 1950s. Brouwer helpfully provides the author name, reference number in the Barth library, title, publication date, whether the source was Reformed or Lutheran, Barth’s own acquisition details (particularly when he acquired the text), and how many times Barth cites each given work in the Church Dogmatics. From there, Brouwer assesses the scope and contours of Barth’s collection and turns to his use of these texts in the Church Dogmatics in general, and, in particular, focuses on the excursuses on the “Old Protestant Orthodoxy.” This sets up the rest of the book, where Brouwer canvases Barth’s development with the primary literature from the Göttingen Dogmatics to his Church Dogmatics. Focusing each chapter on a person (or persons) or a text in relation to a given doctrine (or set of doctrines), Brouwer unfolds the theological landscape Barth was engaging and reveals the degree to which Barth really did engage it. What Brouwer argues, through all of this, is a much more nuanced view than is generally assumed. Barth was a close reader of these texts, to be sure, but Heppe was also an important source and continued to impact Barth’s thinking. Brouwer concludes with a discussion of this latter point specifically, focusing on how Heppe’s continued influence on Barth played out throughout his work.

As can probably be seen from the above description, this book is primary written for Barth scholars and historical theologians with a particular interest in Reformed Dogmatics in relation to Barth’s own appropriation. That said, the meat of the volume is not simply a description of Barth’s use of these texts, but of the text themselves. Detailed discussions of Ramist logic, simplicity, the divine attributes, Trinity, providence, scripture, ecclesiology and justification are just some of the points of engagement. In this sense, even though not entirely robust (each section focuses on a given thinker or select grouping of thinkers), this volume serves as a helpful companion to one’s engagement with post-Reformation Reformed theology (with the interesting feature of seeing Barth’s use and critique). Overall, this is an incredibly thorough, well-researched, and developed account of Barth’s use of the Reformed High-Orthodox. With the current interest in engaging these sources, and with the continued interest in Barth, this volume will be of particular interest to scholars seeking to place Barth in relation to the Reformed tradition.