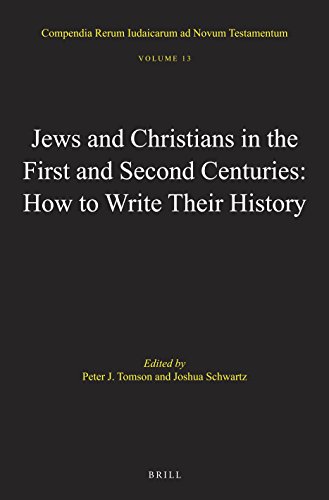 Jews and Christians in the First and Second Centuries: How to Write Their History

Does it really matter if the study of Judaism and Christianity in the first two centuries CE is treated as one single history instead of two separate histories? The authors of this volume argue compellingly that it does.

In the introduction of this collection of essays, the editors insist that we need a whole new approach and paradigm, which they duly provide, regarding the so-called “parting of the ways” between Jews and Christians. They claim that we must study the sources and histories of both Judaism and Christianity simultaneously as one unitary history. In order to do this, they argue, certain common factors that unite Jewish and Christian history during the course of the first two centuries CE, such as the Roman Empire, ought to receive more attention than previously given. By studying the Jewish revolts against Rome and the Christian persecutions under the Roman Empire, for instance, historians will be in a better position to identify the factors that caused the eventual separation between Judaism and Christianity. This is especially important, according to the editors, since “the separation between Judaism and Christianity that materialized during the second century CE was not caused by ‘essential’ theological differences, such as over the profession of the Messiah or of the divine Word, nor the disputes about the implementation of the Jewish law” (p. 5). Rather, they continue:

Our hypothesis is that indeed there were such issues of dissent, but that they were only converted into being causes for separation in the crucible of political and social forces provoked by the Roman occupation, especially the three Jewish revolts, their merciless repression, and the need for the suppressed to respond to the exigencies of the Roman occupation. These political and social forces, while being obvious, were hitherto not sufficiently brought to bear on the shared early history of Jews and Christians. (p. 5).

Not all of the contributors to this volume agree with or embrace this new “shared history” paradigm or the ensuing methodology as outlined by the editors. Thus, there is no strong overarching argument. Nevertheless, the new paradigm and methodology does provide the organizing theme and is a helpful reference point to keep in mind throughout the work, which is divided into three parts: (1) Varieties of Judaism and Christianity in the Late Second Temple Times, (2) The Period of the Revolts 66–135 CE, and (3) Post-Revolt Jewish and Christian Identities.

The sixteen essays range across a variety of topics. For example, the longest chapter in the book is titled with the question, “Why Did Judaeans Go to War with Rome in 66–67 CE?” Steve Mason spends 80 pages reflecting on historical method, only to conclude, rather limply, that the war “seems to have begun because of longstanding and potentially deadly inter-ethnic rivalries in a small region” (p. 205).

Ze’ev Safrai’s chapter focuses tightly on the socio-economic and cultural developments in the Galilee during the late first to early third century CE. “Since the overall data indicate stability during the entire Roman period,” he writes, “it follows that the Galilee was not damaged during the Revolts; its settlement infrastructure remained unharmed. This conclusion greatly limits the possible scope of the socio-economic impact of the Great Revolt” (p. 278). The author readily acknowledges that such thumbnail sketches, felicitous on the whole, sometimes oversimplify. Nevertheless, he handles the topic expertly, writing with precision and an eye for detail. His study also collaborates well with many other recent studies that are gradually modifying the state of ancient economies, not just in the Galilee (see, among others, Bradley Root, First Century Galilee: A Fresh Examination of the Sources, WUNT 2.378 [Tübingen: Mohr Siebeck, 2014]), but also across the entire Mediterranean world.

Not all of the subjects or timeframes included in this study, however, have such well-documented evidence (virtually nothing in the second century is similar to Josephus’s history of the first century and before), and so the authors sometimes speculate by drawing upon related records. But overall this is a richly documented account that weaves into the cast of these two main groups several others—such as the Essenes, Romans, Sicarii, Zealots—to form a layered history of connected, sometimes shared, experiences.

There are two other points worth noting for the readers of this journal. First, the authors of this volume jump into discussions about Jews and Christians without attempting to define either. Granted, several authors at least footnote whether they prefer translating Ἰουδαῖοι as Jews or Judaeans, but none of them attempts to define Christian. Should the reader, then, understand the term in the same sense as it was probably used in Acts 11:26 (i.e., someone who holds Jesus to be the Messiah), or something else? The only author to even approach this difficult task is John Barclay, but not in dialogue with other works covering similar material (cf. Oskar Skarsaune and Reidar Hvalvik, eds., Jewish Believers in Jesus: The Early Centuries [Peabody, MA: Hendrickson, 2007]).

Second, this book has the most to offer those who already have a firm understanding of the key events and players during the first two centuries CE. The uninitiated may come away thinking that too many Christian sources were absent from the discussion, such as the Jewish-Christian conflicts as they are reflected in the Book of Revelation—not least of all in chapters 2–3—or the excommunication of the Jewish believers in Jesus from the synagogues in the canonical Gospels, for instance, John 9:22. But that would be a mistake. This continuing project and forthcoming volumes provide a sense of forward-looking excitement as they will presumably continue to fill in those major gaps. Either way, for those interested in the historiography of this period, this study is essential reading.