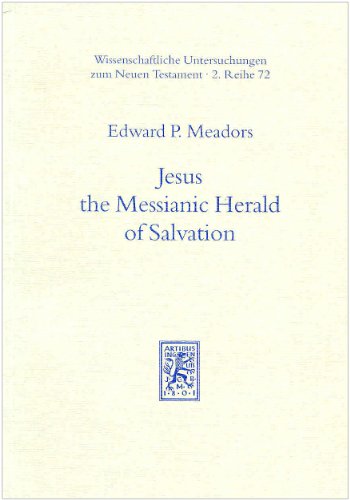 Jesus the Messianic Herald of Salvation

One only has to take a glance at the first page of this book, where five lines of text are followed by thirty lines of footnotes containing untranslated Greek and German, to recognise that it is not for the fainthearted. In fact it is a revision of a PhD thesis completed in 1993 at the University of Aberdeen under the supervision of Professor I. Howard Marshall, and bears all the hallmarks of a technical thesis. This is not a criticism of the book, of course, but the reader who picks up this brightly covered volume with such an inviting title should know that what awaits him or her is very demanding indeed.

The subject of the thesis is rooted in the belief that the gospels of Matthew and Luke were written using two sources, Mark and Q. The question then arises, Do these sources have compatible perspectives on Jesus? Meadors’ answer is, yes they do.

The first chapter surveys the previous discussion of the relationship between the christologies of Mark and Q, from the evaluation of H.J. Holtzmann that both were christologically compatible through to the work of B. Mack which suggests radical disagreement. Meadors states that the ‘purpose of this book is to make a fresh comparison of the Q material with the Gospel of Mark in order to determine whether the two are compatible christologically’ (p. 14).

Chapter two is devoted to a discussion of the ‘Q Community’ hypothesis, as represented by scholars such as S. Schultz, M. Sato and J. Kloppenborg. Meadors finds each reconstruction inadequate, primarily because there is simply insufficient evidence. He concludes that ‘it is far from certain that there ever was an isolated distinct Q community’ (p. 35).

Meadors proceeds to consider the character of Q’s christology. Firstly, he discusses whether Q presents a wisdom christology. The familiar passages Luke 7:30–35, 10:21 and 11:49–51 are examined briefly, along with several important strands of Jewish wisdom tradition. Then Meadors deals with the possibility that Q portrays Jesus as a prophet in a way that challenges Mark’s account. In the course of his discussion, he emphatically rejects the view that prophecies from the lips of Christian prophets found their way into the Jesus tradition.

Chapters five and six deal respectively with the Danielic background to Q, and the appropriation by Q of the distinctive Danielic theme of the Son of Man. Meadors’ discussion firmly establishes the Jewish background of the Q material.

Chapter seven is a very substantial discussion of the kingdom of God in Q, and is followed up by a comparison with the treatment of the same theme in Mark. Meadors concludes that Q presents Jesus as the embodiment of the power of God, the kingdom of God, and that ‘Mark and Q are consistent with one another in their respective uses of ‘the kingdom of God’, the most important theme which they share’ (p. 293).

A final chapter discussing whether Q belongs to a second sphere of Christianity (the answer is no) is followed by a summary, plus two appendices dealing with material from Acts and Paul.

As one would expect in a volume such as this, there is a full bibliography plus indices for references to canonical and non-canonical literature, and modern authors.

Throughout this book the reader will find helpful exegesis of the Synoptic Gospels which is valuable even if he or she remains entirely unconvinced by the Q hypothesis. This volume is an example of cautious interaction with Q scholarship which yields positive and constructive results. The publishers are to be commended for making this important volume available in an affordable paperback edition.