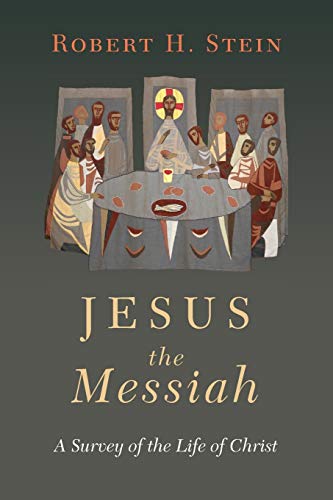 Jesus the Messiah—A survey of the life of Christ

‘The time is ripe for a new account of the life of Jesus’. This is the claim made on the dust cover of this book by Robert Stein, a bold claim, since there are, it seems, a number of books that deal with the life of Jesus in one way or another, and thus there needs to be a justification for another one. Perhaps one with a specifically evangelical thrust has not been attempted for some years, and so Stein feels that such a venture would have value.

His book is divided into two main sections of unequal length (45 and 216 pages respectively). In Part One, the shorter section, ‘Key issues in studying the Life of Christ’, Stein discusses what he things are important matters to reflect on before embarking on a full appraisal of ‘The Life of Christ’ in Part Two.

In the former, the first chapter (‘Where you start determines where you finish’) looks at the role of presuppositions in studying the life of Jesus, and in particular what sort of approach one should take to the supernatural and miracles in such a study. Noting that many ‘Lives of Jesus’ take a non-supernatural approach. Stein argues that it should be on the basis of evidence that this matter ought to be resolved, not ‘on the basis of an arbitrary decision that eliminates God from acting in history’ (p. 23), and that ‘an openness to the supernatural’ is a reasonable starting point. He then discusses the various sources for studying Jesus’ life—non-Christian (pagan and Jewish) and Christian (extra biblical and biblical). Finally, he looks briefly at various chronological issues (the birth of Jesus, the beginning of his ministry, its length and the date of Jesus’ death and resurrection). The first chapter is a particularly useful one for clearly enunciating some important issues and arguing for the importance of not neglecting the supernatural in examining the life of Christ, which will not find favour with everyone but which certainly demonstrates the effects of presuppositions on any research.

Stein then spends the bulk of the book examining in detail the various aspects of the life of Christ. It is a full and comprehensive account, in which he faces a large number of challenges to the reliability of the gospel accounts and generally gives possible and often cogent responses. He occasionally oversimplifies (e.g. I wondered how fair it is to say that an openness to the supernatural is the methodology for study the lie of Jesus (pp. 13–14)—clearly it is important, but so are other factors). But generally, given the scope of the book, Stein deals fairly with disagreements and challenges to his position.

Again and again I noted helpful discussions on a range of topics—e.g. God’s fatherhood—is it universal, does it reflect a male-dominated world view? (pp. 132–134), Jesus’: understanding of his mission (pp. 150–154) and the significance of the Last Supper (pp. 205–213). I was often enlightened and stimulated as Stein not only responded to issues but also drew out spiritual teaching (e.g. on Jesus’ ethical teaching, pp. 134–139). The matter of harmonisation and its place receives judicious consideration and justification (e.g. on the Trial in ch. 17 and the Resurrection in ch. 19)—not all would agree with this method, but Stein makes appropriately nuanced comments which are worthy of consideration.

This is a useful and valuable book not so much because it says things which are highly original, but because it contains within one cover a mass of discussion and information on the wide variety of topics which cover the life of Christ. A possible drawback is that Stein does not really interact specifically with scholars by name and there is a complete absence of footnotes (although there is a generally up to date bibliography at the end of each chapter). Stein justifies this by saying that ‘the problem of adequately footnoting a life of Christ and doing extensive work in the secondary literature is so great that one wonders if such a work could ever be written’ (p. 10). However, I think it would have been helpful to have given some indication of major scholars and books/articles which take particular positions—it gets a little tedious to keep saying, ‘Some would argue … but it may be responded …’, without giving more specific detail. This would have considerably enhanced the book’s usefulness.

So overall, a clear and well-written book, specific in where it is coming from and unafraid to tackle issues that the text itself throws up, as well as questions raised by scholars who start from a different perspective. A good basis to build from, while also enlightening and informative in and of itself.