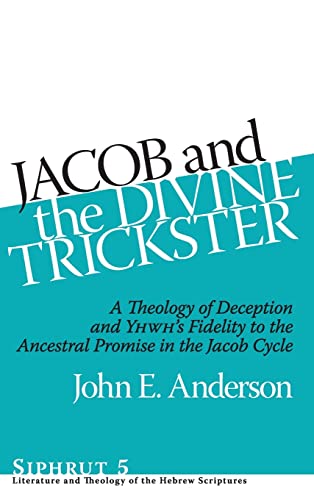 Jacob and the Divine Trickster

John Anderson’s book is a revision of his PhD thesis completed at Baylor University (2010) under the supervision of W. H. Bellinger Jr. The thesis Anderson develops is that God is portrayed in the Jacob Cycle as the divine trickster who uses deception to fulfil his promises to Abraham (Gen 12:1–3).

The book is well structured and clearly presented. A useful bibliography offers readers a good resource for further study in the book of Genesis. There are also indices of authors and biblical references.

In chapter 1 Anderson identifies a problem in Jacob’s prominence as a deceiver and asks how this can be reconciled with “Jacob as elect patriarch (25:23), recipient of the ancestral promise (28:13–15), namesake for the people Israel (32:28; 35:10), chosen, accompanied and protected by God?” (p. 1). His answer is that it is not only Jacob who is portrayed as a deceiver but YHWH is “at times complicit in Jacob’s deception” (p. 1). Jacob succeeds as a trickster because the divine trickster supports him. However, this trickery should not be understood negatively because it is “intimately tethered to God’s concern for the perpetuation of the ancestral promise (Gen 12:1–3)” (p. 2).

Chapter 2 is entitled “A Trickster Oracle: Reading Jacob and Esau between Beten and Bethel.” This deals with the section that begins with God’s promise to Rebekah (Gen 25:23) and ends with the theophany at Bethel (Gen 28:10–22). Anderson argues that “the divine oracle in Gen 25:23 announcing God’s preference for Jacob over Esau serves as the hermeneutical key to comprehending the larger Jacob cycle” (p. 50). He calls this “the trickster oracle” and regards it as responsible for the deceptions that take place. It is this oracle that “impels the narrative’s human actors to set in motion the deceptive means by which the divine wish comes to fruition” (p. 50). A lengthy explanation is given to support the contention that the final line of the oracle is ambiguous and could be translated as “the greater will serve the lesser” or the “lesser will serve the greater” (p. 64).

Chapter 3 is titled “Divine Deception and Incipient Fulfillment of the Ancestral Promise (Genesis 28–31).” Anderson argues that YHWH involves himself in the deception of Jacob by Laban in order to ensure that the ancestral promise would be fulfilled. The deception was, according to Anderson, part of God’s plan to fulfil the promise to Abraham of many descendants. For this to happen Jacob had to marry both wives, but without the deception, he would only have married Rachel. Thus the deception furthered God’s promises, and Anderson describes YHWH as “a character with an agenda” (p. 102). Following the birth of the children the focus of YHWH’s deception is against Laban to ensure Jacob’s prosperity and ultimately to enable his escape from Laban (pp. 109–129).

Chapter 4 is “Replaying the Fool (Genesis 32–35).” Anderson argues that the theme of deception is prominent in the accounts of Jacob’s wrestling and of the meeting with his brother Esau. YHWH deceives Jacob during the wrestling and he is complicit in Jacob’s deception of Esau. Thus the reconciliation of the two brothers is “orchestrated by the trickster God” (p. 170).

The final chapter deals with the question about how YHWH can be trustworthy if he is a trickster. Anderson considers passages that clearly indicate that YHWH does not lie (deceive) and that he is a God of truth and faithfulness (1 Sam 15:29; Ps 31:6; Deut 32:4). Anderson argues that this is a tension that we should not attempt to resolve (p. 186). He suggests that Walter Brueggemann’s distinction between core testimony and countertestimony provides a helpful template for understanding how Yahweh can be considered both trustworthy and deceptive.

Anderson’s approach is interesting and it provides helpful insights, but his argument that YHWH is implicated in the deception of Jacob is not convincing. YHWH’s choice of someone deceptive does not mean that YHWH is deceptive. YHWH used King David and his son Solomon to further his purposes, even though Solomon was born to someone whom David should not have married. However, this does not mean that God was complicit in David’s adultery (2 Sam 11:27). God used Jacob in spite of his deception and not because of it: Jacob’s wrongdoing is not covered up or condoned and the blessing that he acquired deceptively is shown to be ineffective (Gen 27:29 cf. 33:3). Deception in the book of Genesis is viewed in a negative light: it breaks up a family and destroys relationships (Gen 27:41–45). To characterise God as deceptive requires a transfer of human weakness and failure to the deity, and there is no evidence of this in the Jacob cycle or in Genesis as a whole (cf. Gen 1–3; 6–9; 28:10–16). There is a great deal of deception in the Jacob Cycle, but I see no evidence that the narrator intended to imply that YHWH was a trickster.