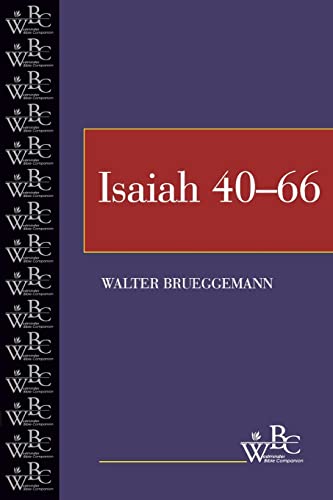 Brueggemann is generally regarded as one of today’s most creative and exciting OT scholars. He recently produced a massive Old Testament Theology with which I expect to be interacting for the next twenty years—or as long as I’ve got. This commentary is for non-specialists, who will nevertheless have to be quite serious about seeking to understand the OT. Brueggemann espouses a ‘canonical approach’: he expounds the final form of the text including only a minimum of critical information and argument. So there are several passing references to what scholars have said about the date and authorship of certain sections, but the whole book of Isaiah, complete with editorial additions and arrangements, is taken seriously as part of the Christian canon. I found little emphasis on canonical concerns such as a found in Brevard Childs’ work (whom he avoids mentioning when he introduces his own canonical approach). Generally he deals with texts as they come—indeed he regards this as the place where the power and importance of Isaiah lies—but does not give much attention to the structure and progression of thought of larger sections.

The arrangement adopted is: brief introduction to a fairly large section of text; then smaller sections of the (NRSV) text—usually in full; comment on these sections. The comment usually reads like a (helpful) extended paraphrase of the section, with additional comments.

Those who have read Brueggemann before will immediately recognise his style and favourite vocabulary, e.g. ‘massive’, ‘odd’, ‘theologically freighted’, ‘articulate’, ‘construal’, including many unusual (striking or ‘odd’) juxtapositions of abstract nouns with qualifying adjectives. Thus we have ‘Yahweh in awesome, ferocious power’, ‘intense mobilization’, ‘odd slippage’, ‘abrupt devastating reversal’, ‘saturated with the severity of Yahweh’, ‘concrete practicality’ (30, 34f., 37), etc. In the commentary (but not the translation) he uses ‘Yahweh’ regularly and avoids the use of masculine imagery or pronouns for God. I wonder why he is so accommodating to feminists but not to Jews (though I do recall a remark of an American friend after a feminist seminar: ‘If they find out I’ve had a male child I’m in trouble!’).

Unlike many commentators today, Brueggemann regularly relates the message of Isaiah to the contemporary world, either explicitly or, quite often, neatly and subtly, by his graphic choice of words, e.g. ‘inexorable workings of economic processes’. Although concrete application is not usually offered, readers will not fail to make connections with their own situation.

Two examples of the commentary may illustrate my overall reaction. First, the section Isaiah 7–11, which contains several ‘child’ passages, including the famous ‘virgin’ passage (7:14) and the child ‘whose name shall be called … Mighty God …’ (9:6). Surely they need to be interpreted together, but Brueggemann deals with chapters 7–11 as part of 5:1–10:4 (6:1–9:7 as a possible insertion at a later time) plus 10:5–34 plus 11:1–16. Brueggemann remarks that the ‘church’s subsequent development of the interpretation of the virgin … cannot be said to be ‘wrong’, but it can be said to go in a quite fresh direction, surely other than the Isaiah text itself’. This looks very much like what I would call ‘wrong’ and I’d like to know why Brueggemann thinks otherwise. However, he doesn’t tell us. I think that he actually misunderstands this section by failing to note that ‘Immanuel’ signifies very bad short term news for a sinful people. Only in 8:9–10 do we get a positive longer term hope associated with ‘God with us’. There is again a great deal that is illuminating and thought provoking, e.g. ‘The sign (7:11) is “a visible gesture” whereby the theological claim of God is made concrete and therefore inescapable’, but Brueggemann waves aside matters that are precious to many Christians: ‘it is undoubtedly clear that the status of virginity is not of any interest or importance for the sign of Isaiah’. The commentary would not, in my opinion, serve well as one’s only commentary on Isaiah.

The same conclusion follows from looking at 52:13–53:12. The text is ‘undeniably inaccessible and without clear meaning’ (his italics), that ‘interpretation is completely bewildered by the specificity of the text that we simply do not understand’ and that neither ‘Christian nor Jew knows how to decode this poetry’. He confesses to being a Christian but almost apologises that his reading may be ‘more Christian that I know or intend’. He describes the broad themes and outlines the action in terms of the servant’s death for others and continuing life, commenting on parts of the text and omitting others. All that is fine but I want to say: ‘We dounderstand this text. Until well into the Christian era both Jews and Christians understood it to be a prophecy of the Messiah. It gives a picture of a person that only Jesus fulfils.’ Perhaps that doesn’t count as understanding?

Overall: plenty of good stuff for everyone and plenty of disappointment for people like me.