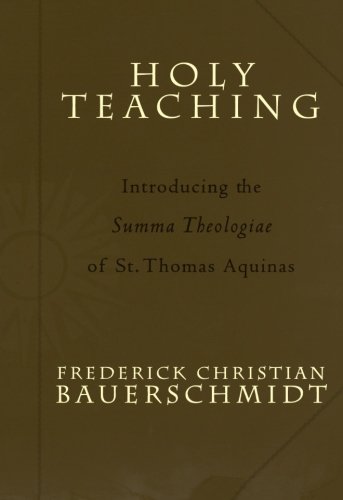 The last few years have seen something of a resurgence of interest in the thought of Aquinas, and yet a translation of his entire Summa theologiae is simply beyond the budget or the requirements of the average student. Even then Aquinas remains somewhat inaccessible: his work is so extensive and his scholastic thought and language and disputational style so alien that the Summa remains an intimidating read.

Frederick Bauerschmidt has thus sought to give the work a wider airing in this introductory anthology. His choice of texts reveals his agenda: he seeks to correct what he perceives as the misapprehension that what are most important in the Summa are the philosophical proofs for the existence of God and Thomas’s thoughts on natural law; he seeks to present Aquinas as a Christian theologian, and not just as a credulous disciple of Aristotle; and the attempts with varying degrees of success to rescue the Summa from many of the charges that have been levelled at it (for instance, that Thomas’s relegation of Jesus Christ, his person, incarnation and atoning work to the end reveals a lack of interest in the actual centre of the gospel).

It is a well-constructed work that will be useful to more than just first-time readers of Aquinas. Bauerschmidt includes a basic background and introduction (including a helpful explanation of Aquinas’ disputational method), as well as a remarkably approachable and yet thorough commentary on the text. It is a good introduction to this model of scholastic thought.