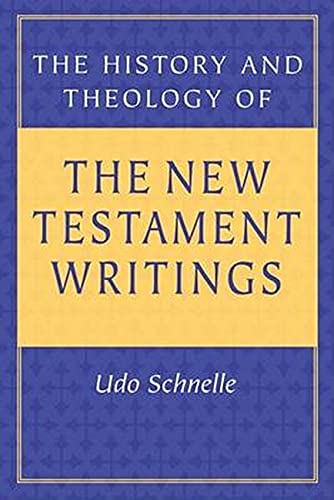 History and Theology of the New Testament Writings

The goal of this book is ‘the illumination of both the historical origins … and the theological intention’ (10–11) of the canonical writings of the NT. Schnelle starts with a short overview of the history of the discipline Introduction to the New Testament, focussing on the relationship between theological affirmations derived from the study of the NT as canonical scripture, and the results of a ‘purely historical’ study of the same documents (2). His own approach entails the conviction that theological considerations have to form a necessary part of any Introduction to the NT, not because of the external canonical concept, but because the NT documents themselves make a binding theological claim. The limitation to the canonical writings is justified by Schnelle ‘both on pragmatic grounds and due to the influence that the concept of canon has had in history’ (12). These introductory remarks about the theoretical basis of New Testament Introduction as an academic discipline and about the relationship between historical investigation and Christian faith (13–14) are a bit too short to be adequate.

The discussion of each NT writing is clearly structured and falls into ten parts: 1. literature, 2. author, 3. place and time of composition, 4. intended readership, 5. outline, structure, form, 6. literary integrity, 7. traditions, sources, 8. history-of-religions standpoint, 9. basic theological ideas, 10. tendencies of recent research. Within the limits of a short review only a few comments on selected issues will be possible. Schnelle communicates his own views clearly and gives fair accounts of different positions. An example of this is his discussion of the synoptic problem: although he clearly favours the two-source-hypothesis (he spends nearly as much pages on the hypothetical sayings source Q—18 pages, than on Mark—20pages), he describes Farmer’s two-Gospel hypothesis, Boismard’s multiple-stage hypothesis, Goulder’s variation of the utilization hypothesis, and Reicke’s variation of the oral tradition hypothesis. These hypotheses are only introduced shortly, but nevertheless the interested student is given first hints where to look for alternatives of the predominant two-source hypothesis. The discussions of time and place of composition in particular, but to a degree also those of authorship, literary integrity, traditions and sources display all the difficulties involved in these highly speculative areas. It is here that Schnelle’s occasional talk of ‘purely historical’ investigations proves to be a positivistic illusion. Inevitably theological views intrude every now and then and it would probably be best to avoid the phrase ‘pure history’ altogether.

Most of the sections on the tendencies of recent research are helpful. Here the reader can quickly get a good idea of the central problems of interpretation of each NT book, as well as the major solutions suggested. Not suprisingly, Schnelle reflects primarily German scholarship (this is a translation from a 1994 German original), but he also includes a number of British and American contributions. Although every part of the NT is treated adequately for such an introductory book, the Johannine writings get special attention (46 pages on John’s Gospel alone; cf. 20 pages on each of the Synoptics). Additional chapters on the chronology of Paul, ancient letters, methodological considerations concerning partition hypotheses about the Pauline letters, pseudepigraphy, the collection of Pauline letters and the formation of the canon make the book a very complete introduction with the potential to replace Kümmel’s Introduction to the NT.