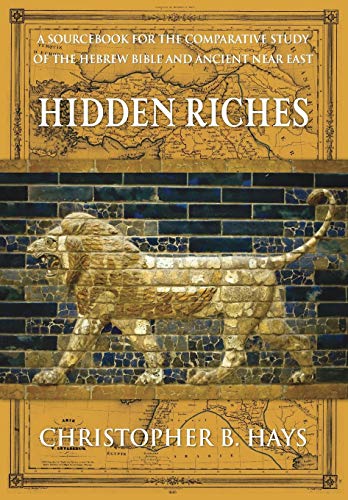 Hidden Riches: A Sourcebook for the Comparative Study of the Hebrew Bible and Ancient Near East

Existing collections of ancient texts from the OT world are extensive, but give little aid for interpreting them in relation to Hebrew compositions. Hays aims to fill the gap by presenting a smaller selection and trying to answer questions about the origins and purposes of the texts and their genres, instigating analysis and comparison and suggesting paths for further study. Recent scholarly translations are used for most of the texts and readers are expected to have a Bible to hand.

In the ‘Introduction’ and informative ‘History and Methods of Comparative Study’ (pp. 3–38), Hays makes the case for comparisons, assumes the ‘dominant critical theories of biblical composition’ and ends an historical survey with the late William W. Hallo’s emphasis on contrast as well as comparisons. The ancient texts are then introduced in the order of the biblical canon, from creation (e.g., Babylonian Enuma Elish, Egyptian Memphite Theology) to Nehemiah’s Memoir (e.g., Egyptian Inscription of Udjahorresne). Inevitably the majority of the texts are common to other compilations of ANE texts with their OT parallels (e.g., ANET, COS), such as the Gilgamesh Epic’s tablet XI for the flood story, Sargon’s Birth Story for Moses, Babylonian Chronicles for Kings, prophetic texts from Mari and Nineveh, Instruction of Amenemope for Proverbs, the Babylonian Job for Job and the Sumerian city-laments for Lamentations. A list of ‘Reflection Questions’ and suggested ‘Further Reading’ follow each text. Throughout Hays carefully admits the present Hebrew narrative texts may retain elements of earlier accounts but were re-written long afterwards to accord with later historical and social circumstances. For example, the blessings and curses following the report of Solomon building the Temple (1 Kgs 9:3–9) are similar to those in Assyrian building accounts which ‘might suggest the biblical account derives from the Neo-Assyrian period’, yet a later date is also possible because Neo-Babylonian kings did not recount battles in their building inscriptions, as the Assyrians did (p. 210, italics original). In the case of Deuteronomy, the book ‘adapts the treaty/oath form … and it seems possible that it is an Assyrian-period reshaping of materials that are not strictly related to the treaty/oath form and may even have preexisted their incorporation into Deuteronomy’ (p. 187). When comparing Hittite and late Babylonian rituals with Leviticus 16 (dated 9th–7th centuries BC), he again allows that biblical texts may preserve much older material (p. 159).

However, his adherence to ‘critical theories of biblical composition’ and the lack of evidence for written Hebrew texts prior to the tenth century BC (p. 7) lead him to emphasise comparisons with compositions from that time onwards. His assertion that there is ‘little likelihood that the prophets would have written down their own words’ (p. 270) in the eighth century BC fails to take account of the prophetic text about Balaam written on a wall at Tell Deir ‘Alla in the Jordan Valley early in that century! While it is true no Hebrew texts survive in copies from the second millennium BC, and direct comparisons can only be made between extant texts, when attention is given to the contents of biblical writings many can be seen to reflect accurately the times they describe to an extent that implies written rather than oral tradition. That, of course, exceeds the scope of this book, but should not be overlooked.

The Joseph story is an example. Both the biography of Joseph and the Proverbs of Ahiqar ‘reflect the struggle of nonnative peoples to prove themselves trustworthy to an imperial ruler’ and share other features that show their relevance to a diaspora context, as do Daniel and Esther (‘Court Stories’, pp. 97–112). Ahiqar has roots in seventh-century BC Assyria, aspects of Joseph ‘reflect contact with Egyptian culture’, knowledge which Hebrew authors could have gained ‘well into the first millennium BCE’ (p. 109). Here the Egyptian culture reflected is consistent with a date early in the second millennium BC rather than in the first, as has been demonstrated repeatedly (e.g., James K. Hoffmeier, Israel in Egypt [New York: Oxford University Press, 1997] 77–106), indicating a premonarchic origin for the body of the narrative, whether in pre-biblical Hebrew or another language, written in biblical Hebrew later.

These similarities demand neither contemporaneity of composition nor influence from one composition on another. The situations they describe can have arisen repeatedly, so giving rise to narratives with common elements independently. Noting that the Egyptian Story of Sinuhe is sometimes set beside Joseph, Hays argues that it ‘is of an entirely different nature’ (p. 110), observing that some Egyptologists now dismiss Sinuhe as unhistorical. We may see the Story of Sinuhe as valuable in showing that a lengthy biography concerning an Egyptian’s life in Canaan could be composed as a work of literature in the nineteenth century BC, perhaps drawn from real life—recently recovered fragments of a tomb inscription of about the same date share some of the traits which have led to Sinuhe being dubbed unhistorical (see James P. Allen, “The Historical Inscription of Khnumhotep at Dahshur: Preliminary Report,” BASOR 352 [November 2008], 29–39). When he says Exodus 25–31 and 35–40 are ‘supposed to describe the construction of the tabernacle’ (p. 209), Hays expresses a sense of doubt without justification, ignoring the textual and artifactual evidence from the Late Bronze Age for such structures (see Richard E. Averbeck, “Tabernacle,” in Dictionary of the Old Testament: Pentateuch, ed. T. Desmond Alexander and David W. Baker [Downers Grove, IL: InterVarsity Press, 2003], 818).

Had the reviewer chosen the texts he would have added the rituals found in thirteenth-century BC buildings at Emar on the mid-Euphrates because they present close similarities to rituals in the Pentateuch (see “Rituals from Emar,” trans. Daniel Fleming [COS 1.122:427–43]). To illuminate the decrees of Darius and Artaxerxes in Ezra 6 and 7, Hays introduces a Roman-era copy of Darius’s ‘Letter to Gadatas’ about wrongful taxation. Closer to the Aramaic biblical reports here would be the Xanthos Decree concerning the provisions for a new cult and the permission to reconstruct the Jewish temple in Elephantine (see Pierre Briant, From Cyrus to Alexander [Winona Lake, IN: Eisenbrauns, 2002], 306–9; and “Recommendation for Reconstruction of Temple,” trans. Bezalel Porten [COS 3.52:130–31]).

Any book which helps readers to appreciate biblical texts better by stimulating them to understand other ancient texts is welcome and this one should certainly do that.