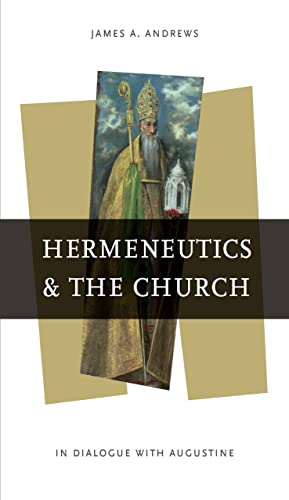 Hermeneutics and the Church: In Dialogue with Augustine

What profit might come from reading the Church’s past biblical interpreters in the context of contemporary theological interpretation? This is the question that James A. Andrews seeks to answer in Hermeneutics and the Church, a revision of his thesis written at the University of Aberdeen under the supervision of Professor Francis Watson. Andrews is particularly concerned to participate in contemporary theological dialogue by utilizing the discrete voices of the past. He is hopeful to show how one might responsibly “appeal to the tradition, read it well, and also apply its insights to the contemporary context” (p. 12). Andrews, however, notes rightly the danger in allowing contemporary concerns to mute the voices of the past. Thus, he hopes in this work to read Augustine through the questions of the present while simultaneously responding to these current issues “in Augustine’s voice.” In this way, Andrews may offer a new method for interacting with ancient texts, one in which Augustine himself may be permitted to set the parameters of the theological discussion on biblical interpretation through his classic text De doctrina christiana (DDC).

Accordingly, Andrews begins Hermeneutics and the Church by analyzing the context of DDC. He reminds his readers of DDC’s composition in two stages: the first (Books 1–3) written in 396/7 and the second (Book 4) in 426/7. Andrews suggests that one ought to read DDC in the context of other works written early in Augustine’s career, notably Ad Simplicianum, Contra epistulam Manichaei, and De agone. These early texts provide two key details to understanding Augustine’s early writing (including DDC): (a) “the overwhelming attention to Scripture” and (b) “the sense that Augustine can write for the average person” (pp. 21–22). Not only, for Andrews, does this explain Augustine’s focus on Scripture in DDC, but it shows that DDC is probably written for clergy rather than the average person, as it reads quite differently than De agone in this regard (p. 22). Andrews catalogues the various interpretations of DDC—from an explicit biblical hermeneutics to a rhetorical handbook—before suggesting that it in fact falls somewhere in between. It is an “expanded hermeneutics,” defined as an interpretation of the text that, beyond a simple search for understanding, involves a turn to rhetoric (p. 39).

In his second chapter, Andrews offers his own close reading and subsequent outline of DDC. He shows how Augustine’s articulation of signs (signa) and things (res)—and how signs relate to things—promotes the process of understanding God’s divine message. Contrary to those who emphasize the semiotic theory of DDC, Andrews argues that such a concern comes only at the expense of Augustine’s overall focus: a true understanding of the ambiguities of Scripture, which requires both an understanding of the whole of Scripture (regula fidei) and of how one should fulfill the command to love both God and neighbor (regula dilectionis).

Perhaps the most significant contribution of Andrews’s work may be found in the third chapter, where Andrews moves his discussion into the realm of contemporary theological hermeneutics. After noting the benefits (and deficiencies) of both general and local hermeneutics (i.e., spatial categories), Andrews asks the hermeneutical question that frames his subsequent dialogue with contemporary theologians: “Is it more important to develop a theory before moving to practice, or does theory serve a subsidiary role to interpretive practice?” (p. 77). By arguing that the more significant question for interpretation is when a hermeneutical theory is employed, Andrews develops two innovative temporal categories: (1) “a priori hermeneutics” (i.e., theory is the fundamental grounding to make interpretive practice more secure) and (2) “a posteriori hermeneutics” (i.e., hermeneutical theory develops within an existing tradition of interpretation) (pp. 78–82).

Having given these new categories, it becomes clear that the distinctions implied by “general” and “local” hermeneutics cannot be neatly applied to Augustinian interpretation. After all, Augustine gives what appears to be a general semiotic theory (Books 1–2) and general hermeneutical rules (Books 2–3), but he provides these within a treatise intended for the process of biblical interpretation (a local hermeneutics). In other words, Augustine specifically employs his semiotic theory in a “theological web,” using these philosophical hermeneutics for explicitly theological ends (p. 94). Thus, Augustine’s interpretation employs thoroughgoing a posteriori hermeneutic, only engaging in theory to support a preexisting theological dialogue (contra Werner Jeanrond, Andrews’ dialogue partner in chapter four, who appeals to Augustine as an exemplar of a priori hermeneutics). For Andrews then, Augustine’s theory is “subordinate to the ongoing theological practice of interpretation within a relationship with the triune God, in which love for God and neighbor are of supreme importance” (p. 99). After discussing Augustine’s seven stages of progression to God (DDC 2.7.9–10)—giving special attention to stage three and the process of scriptural interpretation—and his illustration on the actual process of learning to walk (DDC 2.37.55), Andrews claims that Augustine’s point is clear: “it is better to practice than to learn rules” (p. 114).

Chapter five moves to the rhetorical turn of DDC 4. Augustine’s a posteriori interpretation presupposes a particular community (the Church), and thus the two-fold act of discovery (modus inveniendi) and delivery (modus proferendi) is properly required for a full-orbed interpretation of Scripture (tractatio scripturarum). Moreover, if one must understand the biblical text and then deliver this understanding to others in the group, it naturally suggests that “the sermon is the paradigm for all scriptural interpretation” (p. 149). In this way, the rhetorical nature of DDC 4 is shown to be intimately related to the discovery process outlined in Books 1–3. Though Andrews’ arguments on the role of the sermon for Augustine are strong, one might have hoped for more interaction here with some of Augustine’s actual homilies. Do they clearly display the interpretive paradigm Andrews sees in DDC?

In his final chapter, Andrews sketches some similarities between Augustine and Stephen Fowl, a contemporary interpreter who also articulates an a posteriori hermeneutics: both interpreters focus more on the function of Scripture than its ontology, both emphasize the community in which interpretation occurs, and both speak of God’s voice coming through Scripture. Nevertheless, while Fowl speaks less of “meaning” and more of the community’s “interpretive interests,” Augustine moves beyond any such dichotomy. For Augustine, Scripture and community are simultaneously caught up in the divine economy, making this dichotomy between “meaning” and “interests” superfluous. Thus, reading Scripture rather requires a proper understanding of what Scripture does: “it engenders the double love of God and neighbor when interpreters come to it in order to share with others the will of God as it is expressed in the words of the prophets and apostles” (p. 207).

Hermeneutics and the Church is a fresh and compelling reading of Augustine’s De doctrina christiana. Andrews’ focus on Augustine’s rhetorical turn is a welcome addition to recent scholarly contributions which have rightly noted Augustine’s indebtedness to his rhetorical training. Moreover, Andrews’s innovative temporal categories should prove useful to ongoing discussions centered on theological interpretation. This book would make a profitable companion text for a course on Augustine and his hermeneutics (especially as a supplement to a reading of DDC), and others who seek an entrance into the world of Augustinian hermeneutics might find it a good starting point. In the final analysis, one may not be fully persuaded by all of Andrews’ arguments, but one can hope that the model Andrews offers in Hermeneutics and the Church—a theological hermeneutics enhanced by the discrete voices of the Church’s past—will provoke others to bring fresh patristic voices to bear on current biblical interpretation.