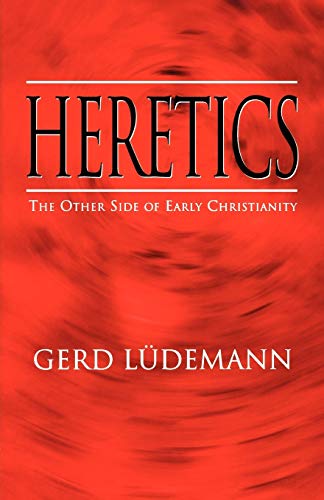 Heretics: The Other Side of Early Christianity

Themelios readers who were to take Luedemann’s advice and begin to read his Heretics at the ‘Ten golden words of his epilogue’ might be discouraged from continuing. That would be a pity. These ten theses, more in the tradition of Spong than Luther, begin by asserting that the Bible is the word not of God, but of man, and amount to a call to debunk historic orthodox Christianity as handed down both in Scripture and in the tradition of the church. But this dogmatic agenda appears to reflect more the presuppositions of the author than the necessary conclusions of his historical reconstruction, and this historical work is of value to those who would reject his theology just as much as to those would embrace it. Of particular importance is the book’s emphasis on the importance of the first two Christian centuries as the time in which Christianity emerged as a separate phenomenon. Perhaps uncomfortable to some will be its insistence that there was already Christian faith and a Christian church before there was a New Testament.

Luedemann builds on Walter Bauer’s influential Orthodoxy and Heresy, which argued that ‘heresy’ was often a form of belief which preceded ‘orthodoxy’ rather than a subsequent deviation from it. He ranges widely across what he describes as ‘the multiplicity of Christianities’ in the second century and the battles waged between them. Individuals and topics covered include Irenaeus. Tertullian, Jewish Christians, Marcion, successors of Paul and John, and the formation of both the Apostles Creed and the NT canon. Luedemann’s sympathies are with those whom he sees as having been branded heretics retrospectively by the victorious Catholic church. His chapter on Paul he titles provocatively ‘The only heretic of the earliest period, or, a Human Paul’. This fits with his argument that the earliest Jewish Christians of the Jerusalem church, those who had made Paul out to be a heretic, were themselves confounded when Paulinists changed from heretics to heresiologists. Thus the originally orthodox Jewish Christians became themselves the heretics.

Exhilarating and infuriating, this was a book which I found hard to put down. Conservatives may wish to differ from its conclusions, but we cannot fault Luedemann on his insistence that all Christian theology should be made subject to Jesus always, and that theology and history must go hand and hand. Nor, at our peril, should we ignore the importance of the second century, the period in which ‘more important decisions were made for the whole of Christianity than were made from the end of the second century to the present day’.

Yet despite realising the importance of this period, Luedemann’s weakness is an apparent inability to empathise with certain church fathers who took steps to exclude views which came to be seen as incompatible with reflecting on the person and message of Jesus.

Whereas Heretics provides a broad outline of Luedemann’s approach to the second century and its important for Christian theology today, Virgin Birth? focuses on a more specific point—what Luedemann calls the real story of Mary and her Son Jesus. Unfortunately, historical research is taken utterly captive to ‘theological’ presuppositions. Despite the agenda set in Heretics, Luedemann works not from the conclusions of historical investigation, but from what Richard Dawkins has called the law of incredulity—I can’t believe it, so it isn’t true.

Here Luedemann states that he is happy to be called an Enlightenment or historical fundamentalist by those who see him as ‘slashing and burning religion and sowing only doubt’. To them he retorts ‘I would rather live in a house built on solid foundations than in a priestly castle in the air’. His tone has changed, and the passion that gave Heretics such an edge seems to have become little more than vitriol. ‘The tomb was full and the manger empty’ is the conclusion he reaches, and scholars whom he acknowledges to be ‘stars of biblical exegesis’ like Raymond Brown, Joseph Fitzmeyer and J.P. Meier are deemed either too cowardly to contradict Catholic dogma, or those who have become used to living in a spiritual ghetto.

Luedemann’s analysis falls in three main parts. First, an introduction to Mariology. Second, the redaction, tradition and history of Mary in the NT and in extra-canonical sources. Third, the theological results which he extracts and their application.

Even the possibility of a historical virgin birth is excluded from the outset. Various modern theologians, notably Pannenberg, are quoted and their differing grounds for rejecting the virgin birth are considered to overturn both the traditional Protestant view, represented here by Luther, as well as the more wide-ranging doctrinal pronouncements made about Mary by the Roman Catholic Church. Confessional Protestants accept that Mary was the mother of God—Cyril’s theotokos—and to this Roman Catholics add three further articles faith: the perpetual virginity, the immaculate conception and the bodily assumption of Mary. Of interest to students of the Reformation will be Luedemann’s discussion of how Luther accepted the perpetual virginity as biblical but rejected the immaculate conception as not; the third point only became official dogma in 1950.

The second part of the book is likely to be of most interest to Themelios readers. Here Luedemann goes through the early sources in chronological order. Paul knows that Jesus was born of a woman; Mark gives her a name and a family, thereby seeking to neutralise the morally problematic absence of any mention of a father. Matthew, Luke and John all delete Mark’s problematic phrase, ‘Son of Mary’. Matthew and Luke go further by introducing Joseph (albeit at different points) and making him Jesus’ father, so responding to Jewish criticism of Jesus’ premarital birth. Luedemann suggests that the historical basis for this may be that Joseph adopted Mary’s son who was conceived as a result of premarital rape. Christology develops in parallel with this defence against criticism. Thus the role of the Holy Spirit in the conception is the result of the Palestinian title ‘Son of God’ being reinterpreted in a Hellenistic environment. By endorsing the perpetual virginity of Mary even after the birth, the Protevangelium of James (a second century infancy gospel) only continues the development that Luedemann traces in the canonical texts.

At no point however does Luedemann interact critically with confessional scholarship that differs from him. Simply to rule them out of court is not an academic approach, and here his passion overtakes his erudition. Thus Werner Keller, as someone who seeks to defend the historicity of the Bible, is a soft target to hit. Luedemann tries to accentuate the differences between the Matthean and Lucan birth narratives, but at no point even acknowledges, let alone refutes, the points of correspondence identified by Brown in his Birth of the Messiah (1993), page 34.

Students looking for a balanced historical and theological approach to the Virgin Mary and the virginal conception would be much better looking at collections of essays such as Mary in the New Testament, edited by R.E. Brown and others, or Chosen by God: Mary in Evangelical Perspective, editor, D.F. Wright. Their historical investigation is shown to be no enemy of faith and orthodox belief. Luedemann’s refusal to give such scholars a voice is just as imperialistic as his understanding of the German churches whom he critiques.