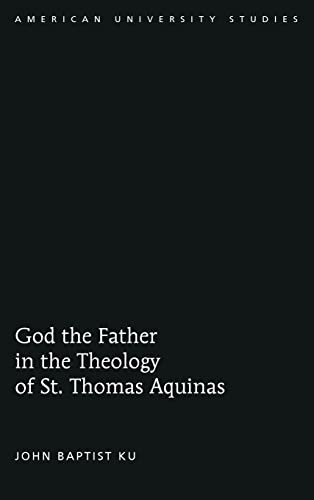 God the Father in the Theology of St. Thomas Aquinas

Few theologians dispute the importance of Christology, much less the need for more robust accounts of the Holy Spirit. Yet, aside from appearances in debates about supposed differences between Eastern and Western approaches to the Trinity, it is God the Father who really draws the short stick. This is partly why John Baptist Ku’s book on Thomas Aquinas’ theology of the Father is so wonderfully timely.

Ku’s treatment includes chapters on Thomas’ scriptural foundation for patrology, the Father’s innascibility, his role as ‘principle’ of the Son and Spirit, his paternity, relation to the Spirit, and his distinct role in the economy. All of this is prefaced by a fairly helpful introductory section, laying out the current state of research and defining technical terms like ‘property’ and ‘notion’. This impressive and thorough study of Thomas’ patrology offers much fodder for discussion, but I limit myself here to a few salient snapshots.

Thomas’s thought on the Father in question Ia.33 of the Summa Theologiæ begins on a negative and positive note, in that order. He distinguishes the strict negation of ‘innascibility’ (meaning ‘unbegottenness’) from the positive property of ‘paternity’ (the Father’s relation to the Son). Thomas believes that only by distinguishing these two, rather than collapsing them, do we retain the decisive advantage over Arian and Sabellian arguments that the Father’s being is incommunicable to the Son and Spirit. Indeed, if the Father’s personhood were constituted by not having an origin, then the Father’s relation to the Son or Spirit could be an afterthought. Thomas therefore prefers to describe the Father as the ‘principle not from a principle’, which contains the respective elements of paternity and innascibility. This technical language is better than saying the Father is the ‘first person’ or ‘first principle’ in the Trinity because it highlights how there is no temporal succession or hierarchy and therefore no first, second, or third in God. It follows that ‘principle’ simply implies order without priority or hierarchy (pp. 147–49).

Intriguingly, at this point Ku investigates Thomas’ use of the terms ‘author’ (auctor) and ‘authority’ (auctoritas) closely. Thomas again shows a sincere desire to avoid any and all language that implies hierarchy or subordination between the divine persons. Bonaventure was willing to assert that the Son possessed a ‘sub-authority’ in relation to the Father, but he meant no more than to say the Son was from the Father. Thomas affirms the same thing—the Son is eternally from the Father—without the messy language of ‘sub-authority’. Indeed, so strong is the association of subordination in this term that Thomas restricts its use to creatures. The English word ‘authority’ bears meanings of having power over another, whereas the Latin auctoritas simply means having a relationship of principle to another. It is in this respect alone that Thomas says the Father has ‘authority’ over the Son, who both have ‘authority’ over the Spirit. In other words, the scholastic language of auctoritas simply expresses the order of the relations of origin and bears considerably less significance than the English ‘authority’ would imply. Ku’s contribution to our understanding on this point should prove useful to current evangelical debates in Trinitarian theology.

In chapters 4–5, Ku offers a clear definition and summary of the importance of Thomas’ analogy of the ‘word’ and ‘love’ in God, which is particularly helpful towards explaining what Thomas means by the Holy Spirit being the ‘nexus’ or ‘mutual love’ of the Father and Son (Ia.37.1–2). Analogous to our own creaturely acts of knowing, God’s self-knowledge is a perfection of his essence and yet there is a ‘concept’ of that self-knowledge that is personal. The Father eternally ‘speaks his Word of self-knowledge’, which is the eternal generation of the Son (p. 218). None of this nullifies the unity of essence—it only describes how each divine person possesses the essence according to their mode of subsistence: the Father knows as the one who speaks the Word, the Son knows as the Word spoken, and so forth. The analogy’s facility for understanding what is fundamentally indescribable also applies to the Spirit’s procession as Love. Analogous to creaturely acts of willing and loving, God’s self-willing belongs to his essence, but the ‘momentum’ or ‘impulsion’ of the object loved/willed is personal—the Spirit proceeds as the impression of God’s love for himself. Since the Spirit’s procession as Love is the Father and Son’s act of self-willing, he is their ‘mutual love’ insofar as he proceeds from both as from one principle. The subtleties of this account are too fine for adequate summary here, but the broad stroke is that Thomas’ analogy of ‘Love’ provides the main context for understanding the likeness of the Spirit as the ‘mutual love’ or ‘bond of love’ uniting the Father and Son (pp. 260–78). Consequently these expressions do significantly less lifting than we might expect since they are not quite analogies. While the reader may still have several questions when the dust settles, this is no fault of the interpreter; rather it is one of those enduring virtues of Thomas’ respect for the unknowability of God himself. Remarkably, Ku’s is perhaps the best treatment of this issue available in English.

In the end, Ku establishes how Thomas conceives the Father as ‘the unoriginate source and ultimate end of all things, in the order of origin among the divine persons and in the relationship of God to his creatures’ (p. 324). Much more awaits the eager student of Thomas Aquinas in this extensive study, which serves as further proof that one’s Trinitarian theology is only as strong as its account of the Father. Perhaps the book’s only drawback is the unfortunate use of endnotes, which, given the target audience, simply baffles. Nevertheless, we are indebted to Ku for his deep reflections on Thomas’ even deeper thought and can only hope that we see more from his pen.