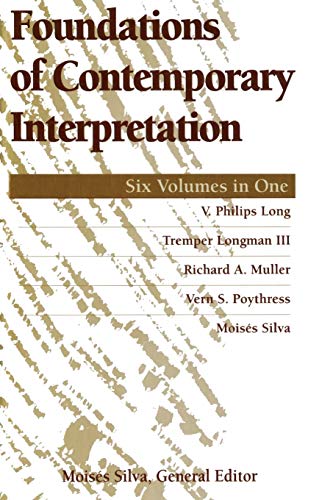 Foundations of Contemporary Interpretation (Six Volumes in One)

I can think of only one reason not to buy this book: you may already own it as a series of six smaller paperbacks put out by Zondervan in the US and IVP/Apollos in the UK between 1987 and 1994. For the price of about two of them you can now own six-in-one, providing an excellent survey of the issues involved in the problems of moving from the biblical text to contemporary understanding.

The book/series is thoroughly committed to an evangelical viewpoint, which makes for a robust treatment of some major current intellectual trends (e.g. relativism) and one would have to say that the degree of sympathy with non-evangelical perspectives varies. But given that evangelicalism has traditionally understood itself as anchored in ‘The Book’, it seems likely that debates over how to interpret that book will remain near the top of the list of contentious issues for some time to come. Silva et al will lead the unwary through some of these interpretive minefields with grace and precision, eyes fixed firmly on the faithful application of the ancient text to the world of today.

Silva’s opening ‘Has the Church Misread the Bible’ is a masterpiece in concise introduction to interpretive complexity, opening the collection with a panoramic survey of methods, and then engaging thoughtfully with the particular problems of how to read the biblical text through the lens of 2000 years of church history and doctrinal sophistication. His recommendation of the study of the history of interpretation remains timely, although perhaps one could go further and claim that without that mediating history of interpretation we are literally at a loss as to how to construe the biblical text in our own alien environment. Silva would likely disagree with this, even if it does only underline the usefulness of his own survey of the topic.

Tremper Longman’s ‘Literary Approaches to Biblical Interpretation’ is a tried and trusted companion to the growth in literary methods. Despite the necessary simplification when structuralism, reader-response theory and deconstruction are all allotted a few pages only, he succeeds admirably in orientating the biblical student in the literary terrain, with a fair analysis of its promises and pitfalls. He is helpful on genre, that much-overplayed hand, with a welcome modesty concerning the ‘fluidity’ of genre. Todorov gets a footnote here, but if one took Todorov’s arguments seriously then the whole notion of assigning interpretive regulation to genre is shot. This just shows the dangers of an introductory guide, I suppose. Longman scores heavily with some extended examples of engagement with the biblical text, as does V. Philips Long, whose ‘The Art of Biblical History’ overlaps considerably with Longman’s concerns. Long suggests that the Bible’s macro-genre has an overarching claim on truth, within which its local genres allow a more elusive relationship between text and history. Long’s voice is sane and serene, a welcome antidote to some of the exaggerated claims made concerning historicity in the evangelical camp.

Silva is on more traditional ground with ‘God, Language and Scripture’ which plays to his great strength: a no-nonsense application of linguistics and its insights to questions of interpreting the Greek and Hebrew text. Vern S. Poythress, on the other hand, is on highly non-traditional ground with his idiosyncratic but fascinating study of ‘Science and Hermeneutics’ which, despite his title, is an extended engagement with Thomas Kuhn’s theory of paradigm shifts as applied to biblical interpretation. Apart from his list of further reading he interacts relatively little with other voices in this area (one would particularly like to see his view contrasted with Nancey Murphy’s work on Lakatos and scientific reasoning in theology) but he is always suggestive.

Finally, the jewel in the crown, Richard A. Muller’s ‘The Study of Theology’ attempts a disciplined study of the move ‘from Biblical Interpretation to Contemporary Formulation’. The interaction of scripture and theology, so long treated as an embarrassing older relative whom evangelicals tried not to invite to the party, is handled thoughtfully and fairly. For anyone who still thought that one read the Bible first and constructed the theology later then Muller gently runs rings around that position and, suitably avoiding trying to be new and startling, reorients the reader to undertake interpretation as part of the inherently theological task of reading as a Christian. This, surely is the way ahead and out of the interpretive confusion which threatens evangelicalism.

Questions remain, of course. First, the whole series fences with the ghost of inerrancy, wakened from its slumbers by some opening remarks of Silva, but never really discussed throughout, thus prompting the response: why bother raising it at all? Long’s consideration of historicity does best here.

Secondly, irritatingly, we are given ‘six volumes in one’ as a ‘comprehensive overview’, but we are not given the original volume two of the seven-volume series, Royce G. Gruenler’s Meaning and Understanding: The Philosophical Framework for Biblical Interpretation (Grand Rapids: Zondervan, 1991), which was every bit as helpful as these six volumes. One is left pondering any editorial significance of this absence, which would reflect unfairly on Gruenler’s achievement.

Thirdly, some of the contributions are now over ten years old, and there is no up-dating. Perhaps a brief editorial foreword concerning how the issues addressed have moved on, if at all, would have been a help.

Fourthly, and evermore, studies of interpretation provoke as much as they enlighten, and I enjoyed the provocation. But Kant, for instance, discussing ‘the sole evangelical, biblical method of teaching the people’ (p. 84) is not only being quoted from a translated introduction of a reprint to someone else (why?!) but surely did not mean ‘evangelical’ in the way that this book’s implied readers will take it. Oh well. ‘Hermeneutics through a glass darkly’ it is then, but we should be thankful for even this, and I recommend it unreservedly.