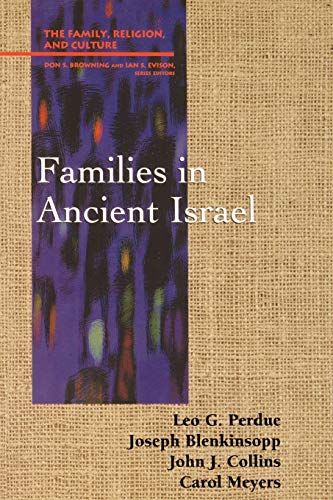 These two books are part of a series entitled ‘The Family, Religion and Culture’ which seeks to present findings about the family in the Bible using social-scientific methods, archaeological findings, epigraphic and non-Biblical literary data. They bring together disparate material in coherent form, isolate and clarify a hitherto neglected biblical theme and are a useful source to inform and extend contemporary debate about the family. In a nutshell, these are an excellent pair of books, well worth buying if you are interested in the subject and well worth careful reading.

The first three chapters of Families in Ancient Israel explore the family in three periods: 1200–1000 BC (Meyers), the first Temple era (Blenkinsopp) and the second Temple era (Collins). An important finding is that, in the period of the first Temple, measures were taken which increasingly concentrated power in the monarchy at the expense of the family. The fourth chapter presents a summary and conclusions (Perdue) and the final chapter (also Perdue) seeks to extend the findings of chapters 1–4 to contemporary life, offering some ‘critical ethical reflection’ (246).

The book argues that the key to understanding the family in the Hebrew Scriptures is the household (better rendered as ‘family household’, ‘extended household’ or ‘compound family’), which functioned in the context of two other social units, the clan and the tribe. The household, which was multi-generational, patrilineal and patrilocal, served economic needs (it provided labour for the economic survival of the family) and was held together by an ethic of solidarity, grounded in mutual interdependence. The book offers a very good social description of the family in ancient Israel.

The conclusion of the book is that the Israelite family ‘provided the primary locus for human existence, social interaction, social roles, moral value, and religious belief’ arising from its ‘corporate identity and solidarity’; it is these characteristics of the ancient Israelite family which, in the view of the authors, may provide a ‘a social basis for contemporary ethical action’ by modern families (253).

Families in the New Testament World contains a wealth of material about the social background of the Graeco-Roman world of the New Testament and seeks to understand the family within that context. The breadth of background material is distilled into readable and accessible form. There are helpful illustrations and photographs. This reviewer read the book for pleasure and was reluctant to put it down!

Part I looks at the Graeco-Roman household in relation to archaeology, social anthropology and the social world of the first century. Part II explores early Christian families and house churches in the context of the social location of early Christians, gender roles, marriage and celibacy, education and learning, slavery and family life, meals and hospitality. The authors conclude that the family was used as the model for the church, and they explore both the advantages and disadvantages of this model.

The reviewer had odd points of disagreement, e.g. the assumption (117) that Romans 16:7 refers to a woman, Junia, not to a man, Junias. Also, it is obvious that modern questions are being asked of texts that were addressing quite different questions. Osiek and Balch are well aware of this difficulty—see page 174, for example. The conclusion they draw is that few Christian writers ‘were interested in the family as such, but rather in family and household as image and proving ground of the church’ (215). The authors quite properly begin with understanding the texts as we have them and then move on to explore the inferences of those texts to understand better families and family life in the NT world. As a result, useful information can be inferred from the material we have.

Osiek and Balch’s book is highly recommended and deserves a wide readership. No student interested in the Graeco-Roman background of the NT should ignore it.