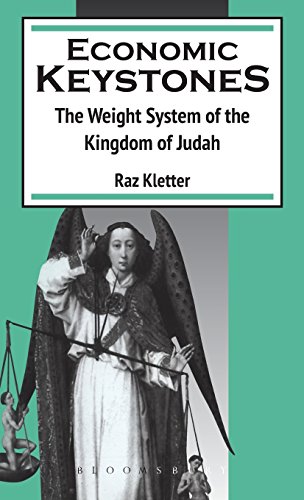 Economic Keystones. The Weight System of the Kingdom of Judah

‘The Lord abhors dishonest scales, but accurate weights are his delight’ (Pr. 11:1, NIV). It was far more difficult to regulate weights and measures in ancient than in modern societies. Systems varied from place to place, sometimes being very localised, giving freedom for fraud. The Bible often refers to the shekel, the common ancient Semitic weight, also to the ‘royal shekel’ and the ‘shekel of the sanctuary’. Babylonian and Egyptian kings issued officially approved weight stones, duly marked, to control standards.

Hundreds of small stone weights have been found in the Holy Land, many marked with symbols, numerals and denominations. Famously, recovery of some marked pym has elucidated the translation of 1 Samuel 13:21. These weights are the subject of Kletter’s volume, primarily a study of archaeological material. He has listed every example he could trace, 434 in all, cataloguing them in two appendices. Many have no known provenance, but a considerable number were found in archaeological excavations, almost all within Judah. Where the excavated examples can be dated, most come from seventh century BC contexts, although a few may be slightly earlier. Kletter presents all this information and discusses critically earlier attempts to understand the weights. He concludes that all belong to one system. There was a shekel of 11.33 grams, with weights in multiples of 2, 4, 8, 12, 16, 24 and 40, sub-divisions of netseph (5/6), payim (2/3) and beqa’ (1/2). Gerah units, probably 24 (as in Babylonia), made a shekel and weights of 2, 3, 4, 5, 6, 7, 8, 10 gerah are reported. This conclusion is sensible and economical, contrasting with previous studies which held that the weights belonged to different systems. Kletter suggests the system began in Hezekiah’s reign, possibly under the impact of Assyrian domination, and was perhaps related to trade with Egypt.

The names were engraved in ancient Hebrew script, a symbol for ‘shekel’ and Egyptian hieratic numerals for other values. According to Kletter, the Egyptian numerals were read at face value on gerah weights, but weights of 4 shekels and above were marked with hieratic numerals for 5 and above, apparently indicating the equivalent of the shekels in Egyptian qedet. He observes, ‘The duality of the numerals … probably caused fewer headaches to the Judaeans than to modern scholars (including the present one)’.

The stone weights are quite small in value, the smallest, 2 gerah, being only 1.7 grams, the most common being the 1, 2, 4 and 8 shekel, that is, up to 90.6 grams. Weights of the same value vary by about 5%. In daily life presumably such weights were used for transactions in precious metals and other costly goods, precious stones, spices and incense.

Among unanswered questions is the value of the ‘shekel of the sanctuary’ comprising 20 gerahs. Kletter treats this as ‘late’ because the references come in Exodus 30:13 (‘P’) and Ezekiel 45:12, and so apparently outside the range of his study. Yet Ezekiel was exiled from Judah before the fall of Jerusalem, when Kletter argues the 24 gerah shekel disappeared, so the prophet would have known it and his statement does not imply the 20 gerah shekel was an innovation. The ‘royal shekel’ (2 Sam. 14:26) does not receive enough attention; no more may be intended than assertion that the weight was of official standard.

Kletter has performed a useful service by setting the study of these stones in order, making clear that there is room for more research into the economy of Judah in the seventh century, which required them, and into their antecedents. The names and functions of weights in the Bible also need more attention, preferably with a more positive attitude than the author adopts, and with more comparison with other ancient weight systems.