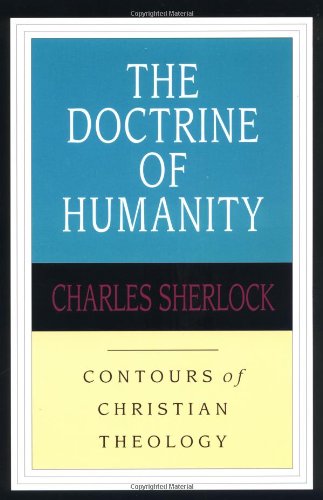 Sherlock is an Australian Anglican, a former lecturer at Ridley College, Melbourne, and now editor of the weekly Church Scene. This book’s footnotes feature biographical snippets for many of the theologians mentioned. The practice is one reflection of the author’s determination to attend to social and cultural context as he addresses questions about humanity. He aims especially to take seriously what is valuable in current discussion, not least in the Australian context, of ecology, cultural plurality and gender. The result is unusual insight at points, for example in chapters on ‘Being a Woman’ and ‘Being a Man’, but this is marred by too much sub-sociological generalisation about what is the case today.

The book follows volumes on God, providence, Christ, the Church, and the Holy Spirit in IVP’s ‘Contours of Christian Theology’ series. Its material is clearly organised. Its first part (‘Focus 1’) comprises three chapters on the doctrine of the image of God. The first two consider OT and NT texts respectively. Sherlock’s interpretation of Genesis 1:26–28 wisely combines the ‘royal’ and relational readings which are too often treated as though opposed. His careful exegesis of Pauline texts on ‘the image of God renewed in Christ’ places emphasis on threefold reconciliation of humans with God, one another and non-human nature. Surprisingly, he does not draw explicitly on Pauline scholarship of the last two decades, although some similar positions emerge. He engages mainly with other anthropological studies, including those by McDonald, Anderson and Hughes. The third chapter is a semi-thematic semi-historical survey of interpretation of the image of God motif in Christian thought.

The rest of the book consists of two linked parts (foci 2a and 2b), the first of which discusses human beings as a kind, ‘The human race’, and the second the individual human being who belongs to the kind. ‘The human person’. The first covers a great deal in a short space and the result is not really satisfying. Of three chapters in this part, the first addresses human life in society, with a focus on economic issues; attention to how corporate structures can be sinful is helpful. The second describes human beings in relation to non-human nature drawing valuably on Douglas J. Hall and Moltmann. The third is on human culture and includes suggestive discussions of marriage, language (’a sacrament of meaning’, Sherlock proposes) and humour.

The most extended treatment in the book’s third part (2b) is of sex and gender (but not of sexual morality). Sherlock’s discussion of these begins after thin material on human dignity, freedom and rights, issues which require conceptual rigour lacking here. It is evident that he has given much greater attention to the topics of female and male, and feminine and masculine. He has, he explains, long been involved in conversation with groups of men and women about these. He brings out differences in women’s and men’s experiences, including of self-perception and of sin. The book’s last chapter, ‘The Whole Person’, discusses body, soul and spirit, the author both rejecting clear distinctions among these and affirming the heuristic value of making such. It closes with thought-provoking comments on the five human senses. There are two appendices, on theological understandings of the transmission of sin and on inclusive language.

While the book is, in sum, patchy, it is valuable for beginning investigation of many of the issues it covers. It may be a virtue that it has less historical and systematic material than its inclusion in the series might lead one to expect. Yet those already familiar with theological anthropology will find surprising its non-mention, among Protestant theologians, of Pannenberg. Those familiar not only with Protestant work will find its lack of attention to the large body of Roman Catholic writing on humanness (for example currently by Germain Grisez) a missed opportunity. Sherlock seems unaware of the attempt in O’Donovan’s Resurrection and Moral Order (IVP, 2nd edition 1994) to present the basis for a clearly evangelical conception of human well-being which draws on some of the resources of the eudaemonist catholic tradition. A chapter giving attention to those resources in a book of this sort could prove particularly illuminating for students.