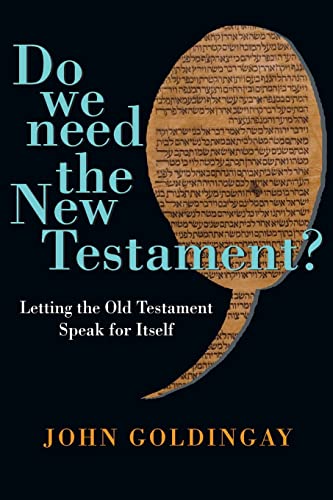 Do We Need the New Testament? Letting the Old Testament Speak for Itself

In his provocatively titled book, Do We Need the New Testament?, John Goldingay seeks, as the subtitle suggests, to invite Christians to listen to the OT’s own voice rather than marginalizing it or subordinating it to the NT. While he affirms that we do need the NT as a revelation of Jesus’s life, death, and resurrection, he argues that the NT does not offer a significantly different or better revelation of God’s character and his dealings with people than are found in what Goldingay prefers to call the “First Testament” (FT).

The book contains nine chapters, framed by a brief introduction and conclusion. In his first chapter, Goldingay questions how necessary the NT is to various aspects of biblical theology and practice (such as salvation, mission, and spirituality), repeatedly stressing the continuity between the two Testaments. The most important theological development in the NT, he argues, is the hope of resurrection and, on the flip side, Jesus’s teachings about hell (pp. 24–25). Even the pivotal events of Jesus’s death and resurrection, he holds, were simply “the logical end term of a stance that God had been taking through First Testament times, … God has always been able and willing to carry their [his people’s] waywardness.… Israel has always been able to respond to God and to be in relationship with him” (p. 14)—a point he underscores when he explores the significance of Jesus in more depth in chapter 2. In chapter 3 he turns to the third person of the Trinity, highlighting the Spirit’s activity in the FT and drawing parallels to the NT, while also explaining some NT texts dealing with the relationship between the Spirit and the law.

In chapter 4 Goldingay turns his attention to the biblical narrative, highlighting the individual contributions of the various “middle narratives” (i.e., large narrative complexes or biblical teachings that imply a large-scale narrative), which, he contends, are sometimes overlooked in treatments of the overarching grand narrative. Narrowing in to focus on the book of Hebrews in chapter 5, Goldingay contends that Christians have “mis(?)read” that book, leading to a diminished understanding of sacrifice and a misguided focus on “models of faith” in the FT (p. 95). Instead, he argues, Hebrews should encourage us to see a parallel between the church and FT Israel. Despite Jesus’s coming, the church still struggles, like Israel, to follow God faithfully.

Goldingay discusses “the costly loss of First Testament spirituality” in chapter 6, exploring the Psalms as a source of testimony, protest, intercession, and critique of superpowers. And in chapter 7 he examines the concept of memory, describing the FT as Israel’s deliberate memory of its past, which shapes its faith and self-understanding. Turning to the law in chapter 8, Goldingay notes how Jesus’s teaching draws out the implications of the Torah and also offers hermeneutical guidelines to consider when reading commands in both Testaments. Finally, in chapter 9 he reflects on the recent resurgence in theological interpretation of Scripture (especially as advocated by Francis Watson and Craig Bartholomew), arguing against an approach that is Christocentric, Trinitarian, or “constrained by the Rule of Faith” (p. 169) on the grounds that such a stance can limit and skew our perception of the discrete witness of FT texts. Nevertheless, Goldingay contends that biblical interpretation is inherently theological and that it should acknowledge “how Jesus is the decisive moment in God’s fulfilling his purpose in the world.” Theological interpretation should also recognize that the God of the FT is the same God who is revealed in the NT as Father, Son, and Holy Spirit and should consider the interpretive tradition of the church (p. 175).

At points the book could use further clarification. For example, I am not quite sure how Goldingay sees the relationship between memory and history, and many readers will question statements like “much of the account in Chronicles of David is imaginary” (p. 131). Moreover, while chapter 7 makes a significant point about the role Israel’s memory should play in the church’s construction of its identity, some readers may find it overly theoretical. Another point that requires further explanation is Goldingay’s claim that “the First Testament makes little or no link between sacrifice and sin or forgiveness” (p. 92). He rightly brings out other aspects of sacrifice that are often ignored, but it would be helpful if he included some discussion of the Day of Atonement. And I would like to hear more from Goldingay about how biblical scholars and theologians may fruitfully interact to produce both better theology and better readings of Scripture.

Despite some lingering reservations, Do We Need the New Testament? offers a much-needed corrective to the tendency to neglect or devalue the OT found in much of the contemporary church. The book would be of great value to any theological student, pastor, or interested layperson who desires to explore the rich theological, spiritual, and ethical resources that the OT has to offer the church or who seeks to gain a better grasp of the relationship between the Testaments. Readers can expect to have their assumptions challenged, their minds informed, and their passion for the OT (re)ignited by Goldingay’s insightful and engaging discussion, which pairs penetrating analysis with a fervent love for Israel’s Scriptures.