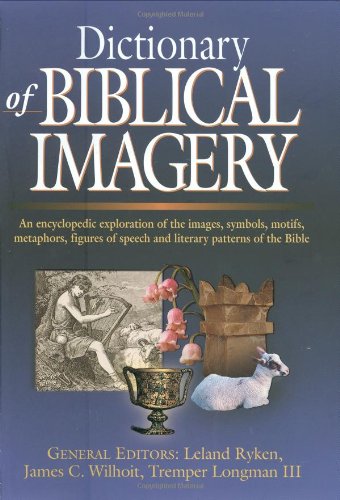 The handsome quality of production that marks IVP’s recent series of Dictionaries is a more relevant review factor in this latest volume than in most; for this one will find sales in the general market, as much if not more than the specialist market for which its contributors usually write. Its primary market, the editors point out, is ‘not scholars but laypeople’. In the specialist market, nevertheless, there is nothing quite like it. There have been predecessors: Benjamin Keach (1640–1704) tackled similar issues in his Tropologia, and later authors who recognised the importance of literary devices in biblical texts include D.R. Dungan, who in his 1888 Hermeneutics included three chapters on ‘figurative language’, and J.W. Monser who around the turn of the century wrote on ‘Types and Metaphors of the Bible’. None of these, of course, had the benefit of the immense amount of work done in the past decades by secular (and some Christian) scholars in the field of metaphor and image generally. The present work’s contributors have had, and it shows.

‘Image’ is a broad term. It means generally ‘metaphor; symbol; striking language; any sensuous effect provoked by literary language’. Many commentators in recent years have included literary qualities as part of the meaning of the text. As a non-theologian trained in literature, I’ve been struck by the attention paid, for example, to literary structures in the work of such scholars as Oscar Cullmann and Stephen Smalley in their books on the Fourth Gospel. The Dictionary of Biblical Imagery takes such dimensions of the text as its starting point. Here you won’t find detailed information about the sacrifice system, but you will find an article on ‘Offering’ that explores the symbolic and metaphorical idea of sacrificial offering in a way that is found usually only in footnotes elsewhere. The result is a deeper understanding of the text, but also a tendency for each article to offer devotional and expository insights that multiply the uses of the book.

The articles are very well judged, giving as much factual information about topics as is needed to understand their function as imagery. They range from short articles on simple ideas to extended treatments, some of the most rewarding of which are the ones that discuss each of the books of the Bible in terms of imagery. Naturally, topics like ‘Israel’ receive thorough treatment, and some, like the moving article on ‘Prostitution’, are virtually sermons in themselves. This really is a book that will find its readers browsing long after they found what they consulted it for.

There are some disappointments. The quality of the article bibliographies makes one wish there were more of them, though presumably the literature is not large. And though the editors’ reasons for not signing articles with their authors’ names are understandable (the articles underwent several stages of editorial revision, reorganisation and other modifications after submission), I sometimes wished I knew who was behind a particular article so I could read more of him or her.

One substantial disappointment is that the organisational logic of the articles is sometimes very strange. It looks as if the book has been organised from the specific to the general instead of the other way round, with the result that a number of sub-topics are not properly gathered under their generic article, and sometimes there is no generic article at all. Cross-references are often arbitrary: ‘Rags to Riches’ is cross-referenced to ‘Poverty’, but not vice versa—which is unfortunate, as the reader is most likely to begin with the more general topic. ‘Iron’ is cross-referenced to ‘Metals’, but there is no article on ‘Metals’. ‘Weapons’ is in, but not ‘War’; and ‘Warfare’ simply refers you to several other articles. In the process, Spiritual Warfare gets merely a paragraph or two under ‘Weapons’, though as a major biblical image it surely deserves a substantial article of its own. ‘War’ does appear in the index, but the index consists of long lists of anonymous page numbers and is not going to be very useful for detailed study.

The problems in organisation do limit the usefulness of the Dictionary, but I have no hesitation in recommending this.