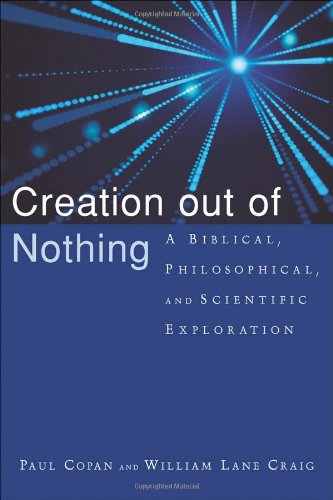 Creation Out Of Nothing—A Biblical, Philosophical And Scientific Exploration

Copan and Craig set out to establish and defend the doctrine of creatio ex nihilo following its neglect in modern theology, the claim that the Bible is ambiguous about this doctrine and the rise of panentheism. The authors seek not to give a theology of creation nor explore all ramifications of creation ex nihilo, but to lay a foundation and ‘stimulate further research and discussion on this important topic.’.

A very useful introduction clarifies what is meant by this doctrine and makes some connections with other doctrines, including a helpful discussion of why we need a trinitarian understanding of the Creator. The overview of the book as a whole is but one example of the clear structure and argumentation one finds throughout, making the whole book easy to navigate.

Chapters 1–3 review the Old Testament, New Testament and early Jewish and Christian sources concluding that, while the Bible only implicitly affirms creation ex nihilo, it is nevertheless unambiguous and rules out creation ex materia. Genesis 1 receives extensive treatment; for example, the material comparing Genesis 1 with other ANE cosmologies will be invaluable for anyone studying this area. Discussion of the Church fathers shows that, while interaction with Greek philosophy was what caused the doctrine of creation ex nihilo to be made fully explicit, its is a making explicit of what was already implicit, rather than (say) a mere reaction to Gnosticism.

Chapter 4 carefully distinguishes between creation (bringing an object into existence for the first time) and conservation (the ongoing existence of that object), a process made difficult by Aquinas’ confusion of the two. The deeper issue is of competing conceptions of time: how is the present ‘I’ connected to the ‘I’ of one minute or one year ago?

From this chapter onwards the material becomes philosophical and mathematical. Terms are not properly defined and the discussion sometimes feels as if Biblical moorings have been left behind, for example, there is only a footnote to suggest the incarnation may have implications for a theology of time, also is the loss of Trinitarian language when speaking of God.

Chapter 5 is about whether God created abstract objects such as numbers, propositions and universals. The over-riding concern is that Platonism is theologically untenable, though Copan and Craig are ‘not prepared to pronounce judgment on which solution is the most plausible account available to theists.’ (195). Anyone who has wondered whether ‘redness’ exists or whether God is limited by mathematics (is 2 + 2 = 4 an eternal truth?) will find here a great introduction to this area of philosophy.

Chapter 6 presents philosophical arguments that the universe had a beginning, essentially revolving around the mathematics of infinity and the impossibility of the universe being eternal.

Finally, chapters 7 and 8 turn to science and the celebrated ‘big bang’ theory. It is only recently that science has held that the universe had a beginning. There are many who develop alternative theories, primarily (it seems), to avoid the obvious theological answer to the question, ‘what, or who, caused the big bang?’ The speed at which theories are developed will likely mean these chapters need updating at regular intervals, even if the conclusion is that belief in creation ex nihilo is unlikely to be contradicted by contemporary cosmology. There are obvious implications for apologetics, although this reviewer’s experience is that such debate seldom, if ever, concludes with Christ and him crucified!

The book as a whole manages to be both wide-ranging and thorough and will be a standard for some time to come. It deserves reading but also though as to how the philosophical and scientific strands might be more closely connected to the gospel of triune God.