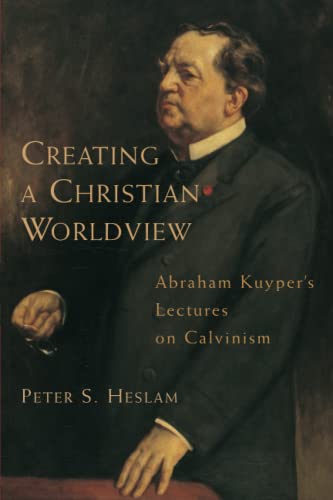 The evangelical public owes Dr Heslam a debt of gratitude for producing such a clear and elegant monograph on a thinker whose influence on the shape of British and, especially, American Reformed theology has been profound. Any who have ever benefited from the work of Francis Schaeffer, Cornelius Van Til, or Hans Rookmaaker, to name but three, have benefited indirectly from the work of Kuyper. A giant in every field to which he turned his hand—journalism, politics, philosophy and theology—he is yet little read (and, it must be said, little translated) in the English language.

One of Kuyper’s works which is available in English is his Lectures on Calvinism, delivered at Princeton in 1898 before an audience which included the eminent theologian, B.B. Warfield. While tradition often sees these two men as representing two discrete apologetice streams, with Warfield as an evidentialist and Kuyper as the fountainhead of modern presuppositionalism, it is clear that the historical reality was not so simple, and that both men had a high regard for each other’s work.

It is these lectures which form the object of Heslam’s study. After initial chapters which deal with Kuyper’s significance, his life, and his visit to the USA. the rest of book is occupied with analyses of the individual lectures, with each lecture having its own chapter. The topics of the lectures are as follows: Calvinism as life-system: Calvinism and religion; Calvinism and politics; Calvinism and science; Calvinism and art; and Calvinism and the future. The whole is rounded off with a conclusion looking at the reception of the lectures both at the time and in terms of later developments.

The picture that emerges from the book is one of Kuyper’s breathtaking vision for Christianity. By ‘Calvinism’, Kuyper did not mean a theological system which could be reduced to distinctive teaching on predestination or atonement; he saw it rather as an all-embracing view of God’s sovereignty, a ‘world-view’ (a concept he borrowed from James Orr) which shapes the believer’s attitude to the world and which provides him or her with a distinctively Christian view on all areas, whether intellectual, cultural, political, or scientific. This thinking has, of course, provided the framework for much of evangelical Christianity’s engagement with cultural and political issues this century.

An example of the application of this thinking by Kuyper is his attitude to science. In dealing with this, Kuyper took very seriously the epistemological impact of sin and the need for the Holy Spirit, and therefore rejected the notion that science was a neutral disicipline which could be pursued according to criteria agreed upon and shared by both believer and unbeliever. Instead, there was such a thing as the science of the regenerate, pursued according to Christian principles—Christian presuppositions—which was mutually exclusive of that pursued by the unregenerate. Such a regenerate science worked on the premise that the world was the creation of the sovereign God and thus, for example, assumed that as such it exhibited unity, stability and regularity—presuppositional beliefs which inevitably shaped the whole enterprise.

It is interesting to note in this context that, of Warfield and Kuyper, it was the former who adopted a more positive—indeed almost, but not quite, uncritical—attitude to evolutionary theory while the latter was very negative towards it indeed. This is a difference which Heslam traces to Princeton’s positive approach to certain elements of Enlightenment epistemology in contrast to Kuyper’s rejection of the continental tradition of rationalism. The point is well-made, though Heslam does not engage with some recent literature on Kuyper and Warfield which has called into question such an assessment by pointing to the Kantian roots of Kuyper’s thought, in contrast to the pre-Enlightenment currents in the curriculum at old Princeton where the influence of Bacon and Reid was not as strong as many have claimed.

All in all, this is a most fascinating and enjoyable read. Evangelicalism has consistently failed this century to produce anyone of the stature of a Warfield or a Kuyper, and it is a pleasure to be reminded that the evangelical world was one which was once populated by giants. We may not have them anymore, but thanks to books like this, we may still profit from what they have to say and, in a day of small visions aspire to greater things.