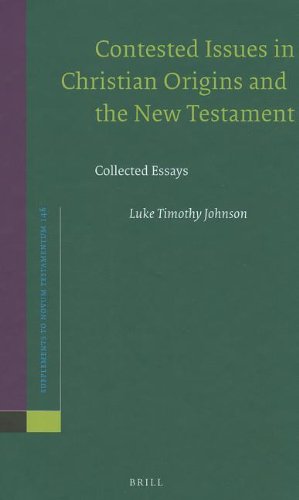 In our day of ever-increasing specialization, it is refreshing to read the work of a scholar whose expertise truly spans the breadth and width and depth and height of NT and early Christian studies. In this lengthy compilation, we have essays by L. T. Johnson ranging from “The Jesus of the Gospels and Philosophy” to “Paul’s Ecclesiology,” to “The Bible after the Holocaust.” In all, the volume includes thirty-five essays in five categories: Jesus and the Gospels, Luke-Acts, Paul, Other NT Compositions, and Issues in Christian Origins. Nearly all of these essays have been previously published, so let the reader beware: its contribution is its accessibility, not its originality. A review of this nature can hardly cover each essay in detail, and a short sentence on each is not likely to be useful, so I will instead offer more thorough comments on one or two essays from each of the sections listed above.

The first, titled “A Historiographical Response to Wright’s Jesus” (orig. pub. 1999), is a rather scathing critique of N. T. Wright’s Jesus and the Victory of God (Fortress, 1996). His concluding statement: JVG “yields neither a rendering of Jesus nor an account of the Gospels that is convincingly historical” (p. 70). Johnson argues that Wright places an overarching narrative framework on the gospels that is insufficiently attested in historiographical data, conveniently ignores such data as lies outside his thesis, and in the end reduces the diverse witnesses of the synoptic gospels (Wright says very little, apparently, about John) into a single “presumptive master story” (p. 67). Wright has often enough been a lightning rod for both affirmation and criticism, and this essay is certainly worth reading for anyone interested in his work (or in historiography in general).

The second, “Narrative Criticism and Translation: The Case of the NRSV” (orig. pub. 2008), explores the intersection of narrative criticism—reading texts in light of broader narrative themes presented by the whole of a single work—and translation theory, bringing together in particular the NRSV’s rendering of Luke-Acts. Johnson argues that the NRSV committee did not take narrative criticism into account, thus resulting in “inadequate and at times erroneous translation” (p. 220). He juxtaposes two principles of translation: that “diction should always respect the immediate context” and that “diction should attend to the rhetorical effects embedded in the Greek by an author” (pp. 223–24), and suggests that the NRSV has leaned heavily on the first at the expense of the second. While much of the textual analysis was helpful, I found the two translation principles to be less so, inasmuch as they assume that an author’s use of a word in its immediate context necessarily differs from what he/she meant by that word when taking the whole work into account.

The third, “1 Timothy 1:1–20: The Shape of the Struggle” (orig. pub. 2008), demonstrates the critical divide between those who take 1 Timothy as authentically Pauline—that is, “produced in the apostle’s lifetime under his authorization”—and those who see it as the “pseudonymous production of a later generation” (p. 384). After dealing briefly with the history of the authorship question, he offers a reading of 1 Tim 1:1–20 that ought to be valid whichever way we turn on that question. Then, however, he demonstrates the continuity of the “Pauline” rhetoric and theology in that text (according to his reading) not only with the other pastorals, but with the rest of the Pauline corpus as well, especially Galatians. This was a useful essay insofar as he sheds much-needed light on the logical and exegetical fallacies underlying arguments against Pauline authorship of the pastorals and 1 Timothy in particular.

The fourth, “The Scriptural World of Hebrews” (orig. pub. 2003), asks the question “What does it mean to enter into the symbolic world of a New Testament composition like Hebrews?” (p. 407), and concludes that on Hebrews’ own terms it means, fundamentally, to enter a world that is “entirely and profoundly Scriptural” (p. 418). This is true in three ways: first, Hebrews draws its readers into the world of the OT, which Hebrews identifies as God’s own speech; second, God’s speech now extends to the “life, death, resurrection, and priestly enthronement of Jesus” (p. 420); and third, Hebrews’ own “word of exhortation” (13:22) is thereby in continuity with these earlier divine speech acts. This was one of my favorite essays in the volume; much ink has been spilled on the particularities of Hebrews’ use of the OT, while more synthetic pieces such as this are rare.

The fifth, “The Bible After the Holocaust: A Response to Emil Fackenheim” (orig. pub. 2002), responds to Fackenheim’s insistence upon recognizing the holocaust as hermeneutical novum—that is, all interpretation of the OT prior to 1945 is defunct and useless and need not be taken into account because the Shoah has so reshaped our perspective on God, his (Jewish) people, and his world. Johnson ultimately rejects Fackenheim’s thesis insofar as an experienced novum is not necessarily an historical one. As a historian, he argues, “one cannot declare one’s own or anyone else’s experience unique, for the rules of historiography do not allow that sort of declaration” (p. 631). This essay typified the volume: gracious, personal (Johnson offers numerous personal anecdotes), logically sound, and ultimately committed to the novum that is the life, death, and resurrection of Christ.

Finally, “The Complex Witness of the New Testament Concerning Marriage, Family, and Sexuality” (published here for the first time) examines the diverse and “often enough conflicting” ways that the canonical texts of the NT depict the relationship between Christian faith and the nuclear family (p. 659). Less synthetic than those discussed above, this new essay is basically a biblical-theological data dump. If you are looking for a basic overview of NT statements concerning marriage and family and sexuality, this is the essay for you—but if you are seeking constructive theological analyses of these texts, look elsewhere. Johnson, I should note, states that homosexuality falls outside the NT’s parameters for Christian sexuality, but he is clearly on record elsewhere as rejecting Scripture’s teaching on homosexuality and advocating for a move beyond Scripture to a higher authority (i.e., cultural experience and the ongoing creative work of God). [Editor’s note: E.g., see https://www.commonwealmagazine.org/homosexuality-church-1.] He also refers readers (on p. 677n94) to another article of his for further comment.

In all, this volume offers an excellent window into the life and scholarship of Luke Timothy Johnson, one of the premier NT scholars of our era. Few are likely to pick up the $285 price tag, but by all means check it out from your library (or track down individual essays in their various original publications).