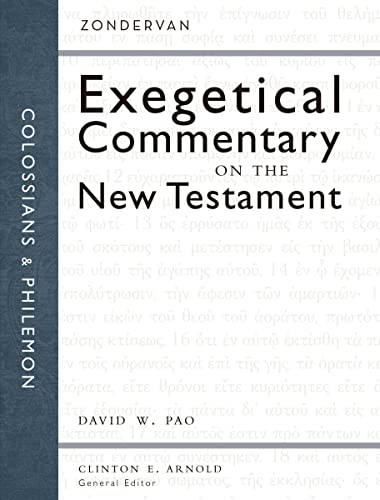 Colossians and Philemon Zondervan Exegetical Commentary on the New Testament

The new Zondervan Exegetical Commentary on the New Testament series has produced a handful of volumes to date (Matthew, Luke, Acts, Galatians, Ephesians), and Colossians, by Dr. David W. Pao, is one of the latest, and certainly a model for the series. While the market is flooded with every kind of Biblical commentary imaginable, the ZECNT has managed to find a helpful niche, offering a textbook-looking design and streamlined format that aims to serve the busy evangelical pastor. Three features of this commentary series are distinct and notable. First, the series is designed to interact closely with the Greek text, but intentionally avoids esoteric grammatical and syntactical jargon. Second, the editors desired to simplify and clarify the biblical text using “main point” statements for each passage, as well as charts showing the structure and flow of the text. Finally, the discussion of each passage ends with brief reflections on the theology and points of application from the author’s perspective. For the sake of brevity, I will focus my comments on the larger portion of the commentary, the material on Colossians.

The study of Colossians is already well-served by excellent commentaries by Peter O’Brien, Markus Barth, F. F. Bruce, James Dunn, Ben Witherington, and many others. Pao’s work, though, is welcome as he has interacted with the most recent research and demonstrates judicious exegetical choices.

The introduction to the commentary covers the expected issues of authorship, dating/provenance, and background. Pao offers a brief defense of Pauline authorship. He questions the validity of basing a decision (against authenticity) on vocabulary or even style, since Paul may have used an amanuensis. More importantly, he addresses the theological peculiarities of Colossians. He urges that differences between Colossians and the undisputed letters are exaggerated, and the similarities are underappreciated. He also accepts that “development” in Paul’s thought is not only possible, but even expected and natural. As for when and where Colossians was written, Pao tentatively places Paul in Rome writing around 60–62 AD.

What about the situation behind the letter? Pao surveys a number of hypotheses regarding the identity and concerns of the false teachers and their philosophy: “Pagan Philosophy,” “Jewish Legalism,” “Jewish Mysticism,” and “Syncretism.” While he offers the merits and drawbacks of each theory, he is most persuaded by the notion that the teaching was “a syncretism with Jewish elements providing the controlling framework” (p. 31). Pao believes this reflects most accurately the complexity of religious life in first century Phrygia.

The commentary itself is too long for detailed engagement, so I will address a handful of key texts of Colossians that Pao discusses. One of the earliest textual challenges one faces in the study of Colossians is the meaning of 1:24 where Paul refers to filling up the lack regarding Christ’s afflictions. Pao supports a common interpretation that associates early Christian suffering with “predetermined messianic afflictions that are taking place in the eschatological era” (p. 123). While this reading is popular (and possible), it is hard to see how it relates to or fights against the false teaching.

A second key interpretive challenge is the translation and identification of the stoicheia tou kosmou (Col 2:8, 20). Pao accepts translations such as “elemental spirits of the world” or “elemental forces/powers,” based on the frequent references in the text to angels, as well as Paul’s linking of the false teaching with “evil spiritual forces” (p. 161). I think Pao makes a good case and offers the strongest reading of this phrase.

What about the thorny phrase “worship of angels” in 2:18? Pao leans heavily towards the objective genitive interpretation arguing, “angel veneration has been shown to have existed in Phrygian Judaism” (p. 189). In my own study of the word for “worship” (threskeia), though, I am not convinced it means “worship” as much as “religious practice” (see the recent work of Luke Timothy Johnson, Among the Gentiles). Angels were believed to have been celibate and did not eat or drink (see Tobit), which fits in rather well with the asceticism of the false teachers. Pao does not entertain this possibility, nor does he explore the meaning of threskeia in the kind of depth I had hoped.

Finally, we turn to the household code and its proper interpretation for today (3:18–4:1; see pp. 262–285). When it comes to the command, “Wives, submit to your husbands” (3:18), there is the matter of whether or not that should be understood as a universal Christian ethic (i.e., wives of every time, culture, and stage of salvation history should submit to their husbands). Pao appears to treat this as a universal ethic, especially in view of Paul’s “reference to the submission of Christ to God or the church to Christ as models for wives’ submission” (p. 263). However, he does not dwell on this subordination, and even sees the following clause “as is fitting in the Lord” as limiting and relativizing (see p. 267). While I had hoped for a more nuanced discussion here, I appreciated that Pao kept the focus on the family’s submission to Christ as Lord. Note Pao’s apt gloss of the whole code (from the subordinate’s end): “A wife/child/slave must put the Lord first” (p. 263).

I feel quite comfortable commending this commentary to pastors who want to consult a reliable commentary for Bible study, preparation for sermons, and even personal study. Pao always presents the interpretive options, and offers a rationale for his preference. My favorite part of the volume, the element I felt made it stand out among available Colossians commentaries, is the section on theology and application. Plenty of commentaries re-hash the same exegetical conundrums. But preachers often get stuck making the leap from the first century to today. Commentaries like the ZECNT, including Pao’s volume, offer the kind of counsel that preachers desperately need.