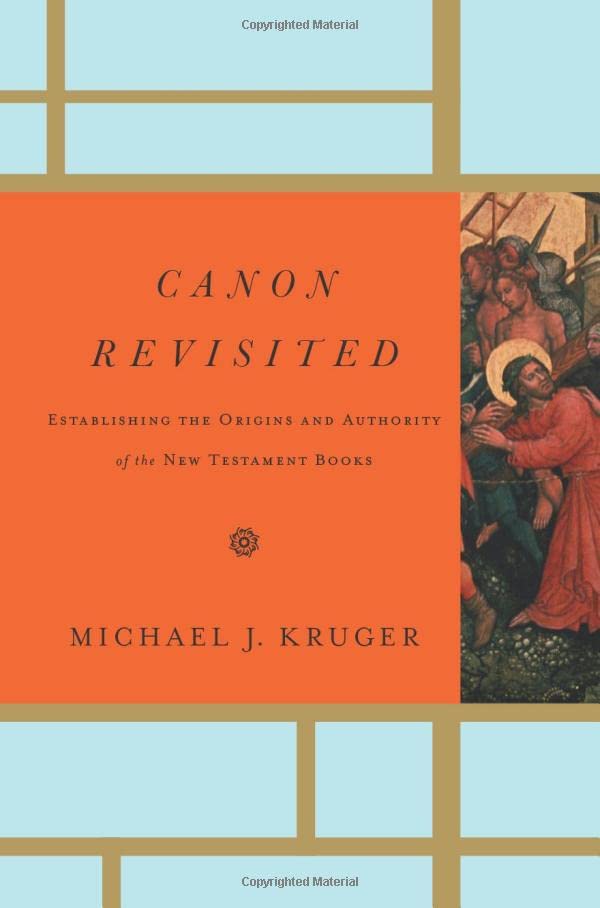 Canon Revisited: Establishing the Origins and Authority of the New Testament Books

Michael Kruger has provided an important, well-written, and well-researched book that has potential to meet the needs of biblical scholars (evangelical and otherwise), ministers, and lay Christians of all sorts. The style is very accessible with nicely composed transitions, and the content is intellectually rich. Kruger is deeply familiar with all the important issues, literature, voices, and controversies surrounding the subject of the NT canon (note the extensive footnotes). He presents the information and argument in a manner that is theologically responsible, mature, humble, and persuasive. Kruger is also keen to acknowledge his Christian presuppositions in his scholarly work. This means that his approach is both theological and historical.

The main purpose of the book is to address the question of “whether Christians have a rational basis (i.e., intellectually sufficient grounds) for affirming that only these twenty-seven books rightly belong in the New Testament canon” (p. 20). In other words, “is the Christian belief in the canon justified (or warranted)” (p. 20)? In addressing this question, Kruger is aiming to answer what he calls the “de jure objection” which “argues not so much that Christian belief in the canon is false (the de facto objection), but that Christians have no rational basis for thinking they could ever know such a thing in the first place” (p. 20, parenthesis added). Therefore, Kruger develops his argument not so much to persuade skeptics of the canon’s truth as to provide an “accounting for our knowledge of canon” (p. 21). Can Christians really know which books belong in the NT canon? Does Christianity provide sufficient grounds for knowing? Kruger has provided a compelling case for a positive answer to these questions.

The book is divided into two main sections. In the first section Kruger explains and responds to different canonical models on offer. In doing so, he provides good and fair descriptions as well as penetrating evaluations. He engages with the important voices representing the various views and offers well-reasoned critiques when he disagrees. These evaluations are very helpful to the non-specialist who might be susceptible to accepting the models that he challenges. His evaluation of the “criteria-of-canonicity” approach is especially helpful since it is likely one that attracts many evangelicals.

The broad categories of canonical models challenged in this section include “community-determined” models (where some response from a community establishes canonicity) and “historically-determined” models (where “historical merits” have the controlling influence in a book’s canonicity). The problem with both types of models is that “they authenticate the canon on the basis of something external to it” (p. 289). This section also introduces the “self-authenticating model,” which is the one for which Kruger argues.

The second main section explores the self-authenticating model in more detail and addresses objections one might have against it. He discusses the special qualities of canonical books as well as some of the important historical issues. As part of his argument that “God has created the proper epistemic environment in which belief in the canon could be reliably formed” (p. 290), Kruger highlights three key aspects which he names as: providential exposure, attributes of canonicity (divine qualities, corporate reception, and apostolic origins), and the internal testimony of the Holy Spirit (see pp. 94 & 290). Initially a reader might be suspicious of the argument for “divine qualities,” as though this were a naïve assumption or irrational claim. However, as the book progresses, this argument becomes more clear and compelling.

He spends three chapters covering the “lengthy historical process by which each of these twenty-seven books was recognized and received as canonical Scripture by the early Christians” (p. 24). Along the way he argues that controversies in the early church should not discourage us from accepting the present canon as correct. Understanding the historical process is very helpful to specialist and non-specialist alike. Readers will learn a great deal from this section, even if one doesn’t agree with Kruger’s argument. Many often wonder at this process but are not provided with adequate information. This is especially problematic if one is given the revisionist’s narrative, rooted in Bauer, that the historical winners exercised their power in silencing any competing versions of Christianity. Kruger effectively demonstrates that this version of the story cannot support the weight of the actual evidence.

Kruger believes that his book’s structure makes a “distinctive contribution to the study of canon” (p. 24). This is because he deals more with the theology of canon than other treatments, which focus more on historical issues. By addressing both theology and history, with theology functioning as a type of worldview lens through which to view the historical information, his work makes a unique and valuable contribution, especially to scholars, pastors, and other believers who are committed to the authority of the NT as we have it. Kruger argues, rightly I think, that the “Canon has an ecclesiological dimension, a historical dimension, and an aesthetic/internal dimension” (p. 293). This is one of the primary positive implications of his study. The self-authenticating model, as Kruger has explained it, brings together the various canonical models by uniting “them by combining their greatest strengths into one system” (p. 293).

Kruger is a serious scholar. He is careful not to overstate his claims, and yet his argument is deeply compelling. His account will help readers get a much clearer picture of the story of the NT canon—one that is not afraid to be honest about controversies, and yet can also properly address those controversies. I highly recommend this book to anyone who genuinely cares to understand and trust the authority of the NT books.