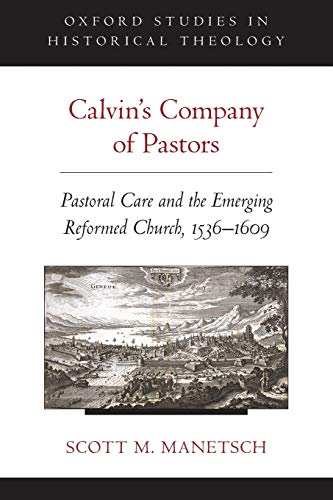 This book finds its genesis in the published sermons of Theodore Beza, John Calvin’s successor in Geneva. As Scott Manetsch worked through Beza’s sermons, the popular caricatures of his theology as stagnant, speculative and scholastic were exposed, leading Manetsch to research the pastoral theology of Geneva’s pastors in the 16th and 17th centuries. The product—Calvin’s Company of Pastors. Manetsch travels more along the path of social history than intellectual history—utilizing archival materials, published sermons, catechisms, prayer books, personal correspondence, minutes, and theological writings—to present an engaging and readable history of pastoral life in 16th and 17th century Geneva.

Manetsch focuses on Calvin’s Company of Pastors, otherwise known as the Venerable Company. This group of ministers was a formal church institution established by Calvin, which met each Friday morning to examine candidates for ministry and discuss theological and practical business for the church, both locally and internationally. The Company was comprised of eight to ten ministers from the city’s churches, four professors from the Genevan Academy and another ten to eleven rural pastors from the surrounding area.

Manetsch’s central purpose in the book is as follows:

To examine the pastoral theology and practical ministry activities of this cadre of men who served as pastors in Geneva’s churches during nearly three-quarters of a century from 1536 to 1609. It explores not only how Calvin, Beza, Goulart, and their colleagues defined the office and functions of the reformed pastorate, but also the manner in which this conceptual ideal was translated into everyday practice in their ministries of preaching, pastoral care, church discipline, visitation, catechesis, and the administration of the sacraments. (p. 2)

On his deathbed, Calvin urged his closest friends and long-time colleagues to “change nothing and avoid innovation.” Manetsch’s work examines the degree to which Geneva’s ministers were faithful to Calvin’s dying wish—a matter previously unexamined by historians. The beginning date in the chronological scope relates to the year that Calvin arrived in Geneva and the choice of 1609 extends to four years beyond Beza’s death. Such a scope allows for an examination of the period spanning Calvin’s and Beza’s successive ministries, as well as the early period of a new leadership after the two reformers.

Manetsch divides his study into two general sections. The first, chapters 1 through 5, examines the history and nature of the pastoral office. Chapter one sets the scene with an overview of Geneva and its Reformation; chapter two introduces the personnel in the Company, while chapters 3 through 5 look at the pastoral vocation, pastors and their households, and rhythms of ministry, respectively. The second part of the book explores more closely the specific duties performed by the ministers: preaching (chapter 6), church discipline (chapter 7), writing (chapter 8), and pastoral care, administered through sacraments, catechesis, visitation, and spiritual consolation (chapter 9). Throughout each chapter, Manetsch looks at the symbiotic relationship between theory and practice, revealing how social and political, as well as theology and biblical exegesis, influenced the pastoral office among this company of men.

Manetsch’s work will benefit church pastors in two main ways. First, the book removes any veneer that one may have of Calvin’s Geneva and its ministers. The book exposes the “golden-age” fallacy, as it breathes with the earthy reality of pastoral ministry, amidst the busyness and complexity of Genevan life. Many of the virtues of the ministers are highlighted, but so too are their vices. For example, Antoine La Faye said that the first ministers belonging to the Company were not even qualified to herd goats. Some were known to be poor preachers; others, glory-hunters; while still others were of questionable character. One minister was disciplined for groping a female parishioner, arguing that he did so “in order to test if she was a good girl”! The Company experienced deep rifts, marriage breakups, and bitter family disputes. Calvin’s family was no exception: his brother, Antoine, and wife, Anne, did not enjoy a happy marriage. She later committed adultery with a servant and the marriage ended in divorce. Manetsch’s book takes the shine off these Reformed “heroes,” while at the same time it reveals how God used fallen-yet-faithful men to consolidate the Reformation in Geneva and Europe.

Second, the book provides modern pastors with a wealth of material from which to mine valuable lessons and resources for ministry. In chapter 6, which deals with the ministry of the Word, one learns what preaching is, the importance of avoiding pretentious reference to the original languages in the pulpit (Calvin took his Hebrew or Greek Bible into the pulpit but never referred to “the original”), preaching in the vernacular to common people, applying God’s Word, and not despising valid insights gleaned from the liberal arts (Beza). Chapter 7, on moral oversight within the context of church discipline, is detailed yet informative. At times the Consistory’s discipline appears “heavy-handed, harsh, punitive—at least to modern sensibilities.” The number of suspensions alone—9,200 between 1542 and 1609—question the pastoral wisdom and spiritual benefits of this kind of church discipline. Nevertheless, the Consistory minutes reveal a deep commitment to pastoral care, from which modern pastors can learn much. Chapter 8 broadens one’s learning in pastoral care, covering baptism, catechism and religious instruction, the Lord’s Supper, pastoral visitation, and spiritual counsel and consolation. Here one finds a number of helpful tips and resources, from the content of church services and the administration of baptism, to ministering individually to people.

Manetsch concludes the book with an epilogue, in which he gleans a number of lessons for contemporary ministry, none of which are ground-breaking, but all of which are timely reminders: the vocation of Christian ministry is difficult and involves many hardships; accountability and collegiality is vital for long-term pastoral work; the Scriptures must play the leading role in renewing and sustaining the Reformation; and pastoral care must be given high priority—Christian ministry needs to be Word-centered and people-centered.

The book exhibits the best of academic research and scholarship coupled with insightful application for modern-day pastors. It is historically accurate, detailed and informative; but the wealth of data never intrudes into the narrative. Manetsch has performed a masterful job of compiling extensive information (a large proportion that appears seemingly dry and irrelevant) into an engaging and vivid portrait of Geneva’s Reformed ministers.

Jonathan Gibson is a PhD candidate in Hebrew Studies at Girton College, Cambridge.