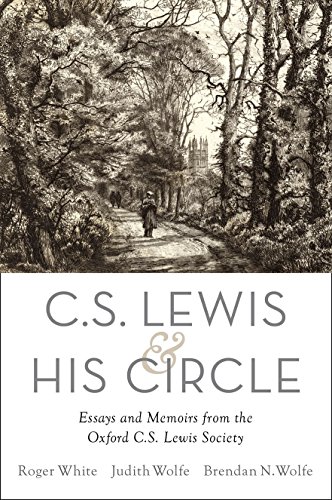 C. S. Lewis and His Circle: Essays and Memoirs from the Oxford C. S. Lewis Society

Gleaned from the archives of the Oxford C. S. Lewis Society, the offerings in this book are talks and presentations made over the years “in the same intellectual and university community that formed and sustained” the Inklings (p. xi). Some of these talks have not been transcribed and published until now. Part One of the book is a collection of essays on philosophy, theology, and literature; Part Two contains memoirs of C. S. Lewis and his family and friends, and finally memories of some of the Inklings. Almost all of the voices in the volume are British, thus bringing welcome perspectives and insights, especially for North American readers. Rather than trying to interact with all of the essays, I will take the books in its parts.

The book begins with the “academic” essays, and readers of these chapters will appreciate the depth and insights they find in Part One. The essays represent a range of topics that reflect something of the breadth of Lewis’s own writings and thinking. Notable in the “Philosophy and Theology” collection and generous in tone throughout is Elizabeth Anscombe’s final words on Chapter III of Lewis’s Miracles. Professor Anscombe’s talk (from 1985) revisits her famous debate with Lewis at the 1948 Oxford Socratic Club, which resulted in Lewis reworking that chapter in the later edition of the book. Moreover, Anscombe’s comments published here clarify her precise concerns with Lewis’s chapter, “The Cardinal Difficulty of Naturalism.” Moving from Lewis to Charles Williams, Paul Fiddes offers an analysis of the Augustinian privatio boni view of evil in Williams’s work. The essays in this section of Part One suggest something of the rich theological and philosophical conversation that members of the Oxford C. S. Lewis Society enjoyed over the years and now, thanks to the editors’ careful selections, available to a wider audience.

The Literature section of Part One offers a rather heterogeneous selection of papers on topics ranging from Narnia and the Space Trilogy to the Lewis Diaries and W. H. Auden and the Inklings. Rowan Williams offers an impressionistic talk on That Hideous Strength suitable to guide an evening’s conversation. Malcolm Guite reflects on what may be one of C. S. Lewis’s lasting contributions to the twentieth century Christian conversation in his comments on that “far-off country,” that longing for God which we all experience and some try to suppress or satisfy in inappropriate ways; Guite offers Lewis’s comments on this spiritual longing as a way forward for Christians in their conversations with people who have imbibed postmodern modes of thinking. Walter Hooper’s comments on “It all began with a picture” are, as always, refreshing and delightful reading.

The essays in Part One provide stimulating and reflective reading for those interested in the many sides of Lewis’s thinking and writings. Leaving the reader wishing for more, they give glimpses that nuance the reader’s understanding of and appreciation for the ways in which Lewis engaged the issues of his day and how he wrote effectively for multiple audiences.

Part Two turns from the academic to personal memories of C. S. Lewis, his brother Warnie, and friends such as Owen Barfield, George Sayer, John Wain, and Nevil Coghill. George Sayer’s offering, though altogether too brief, tells of Lewis’s visits to the Sayer home in Malvern, providing delightful glimpses into a side of Lewis that few of us know much about. Owen Barfield clarifies some misunderstandings about “the Great War” he encountered with Lewis. John Wain offers two chapters, one of Warnie’s Diaries and one on Nevill Coghill, who impressed Lewis from the first time he met him when they were both undergraduates at Oxford. Included too is Ronald Head’s memory of the Lewis brothers as parishioners of Holy Trinity Church, Headington, and Peter Bide who married Jack and Joy in Joy’s hospital room. For readers who want to know more about Jack Lewis the man, the chapters in Part Two offer pleasurable glimpses that are not available anywhere else.

In publishing C. S. Lewis and His Circle, the editors and Oxford University Press provide a rich and stimulating collection of academic essays and personal reflections that all Lewis scholars and readers will welcome. At times whetting the reader’s appetite for more of the same, and at times asking the reader to leap from one topic to another, these chapters offer something for everybody. And therein lies the book’s strength and pleasure. Recommended and delightful.