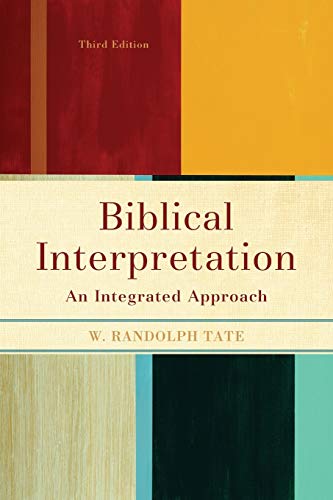 This volume revises and updates Tate’s 1991 ‘comprehensive exploration of the interpretative process’. After a brief introduction, he launches into the task of describing the breadth of hermeneutical activity from the three perspectives of author-centred, text-centred and reader-centred approaches before suggesting how these can profitably be integrated.

The three chapters of the first section, ‘The World Behind the Text’, review historical, linguistic and ideological influences. ‘The World Within the Text’, after considering literary forms, devotes a chapter each to Old and New Testaments, surveying their various genres and how they communicate as literature. The third section, ‘The World in Front of the Text’, first looks at ‘what happens when we read’, then, in a considerably lengthened chapter, assesses reader-response theories and the role of pre-understanding. Tate goes on to discuss how methodology affects the interpretative process, stressing that no approach is neutral or objective, and in a new chapter demonstrates ways in which all three perspectives can be applied in an integrated fashion to Mark’s Gospel. His short conclusions highlight the perpetually tentative nature of the hermeneutical endeavour.

Tate certainly ranges widely across this complex field, as shown by the span, of the ‘Key Terms and Concepts’ listed in the ‘Review and Study’ section that concludes each chapter. These are also usefully highlighted in the main text—though the omission of a subject index undermines the book’s otherwise high potential as a reference tool.

Such a broad review inevitably allows only limited consideration of all it covers. Even the lengthy text-centred section skates superficially across some areas. (Thus he considers parables only in terms of Jülicher’s categories, omitting their potential to operate on more than one level, or through defamiliarisation.) One frequently wants to argue that topics are more complex—or more controversial—than Tate’s smooth style admits. Often only the Study Questions that end each chapter hint at the more provocative issues at stake. The concluding chapters provide some caveats, but many could have been introduced earlier. (That authors/redactors tended to occupy privileged social status is surely a matter for ‘the world behind the text’, not just a concern of feminist approaches.) Greater attention to the historical background would have shed more light on the interplay between various schools of thought.

This work is a useful and comprehensive general introduction, but as with any primer it needs thorough glossing, whether through teaching that unfolds greater depths or further reading.

Evangelicals will want to consider two aspects more thoroughly. The first is the extent to which our horizons of understanding are open to revision or are constrained by our pre-suppositions. (In what ways might the theological stance of the RTSF and IFES and its interpretation be non-negotiable? How do we engage in productive dialogue, without falling into relativism?) Secondly, and more importantly, is the question of how Christian Biblical Hermeneutics relates to secular literary criticism. If we take inspiration seriously there is surely more at stake when Christians and, for example, atheists interpret a Biblical text than merely applying two different worldviews. This is not analogous to, say, Republicans and Democrats reading with differing political perspectives. Tate briefly mentions faith as part of the interpreter’s armoury, but the hermeneutical debate stands in need of a thorough and unashamed consideration of what doctrines of inspiration and revelation mean, in the process of writing, in the text itself, and in the act of reading and so in interpretation. Brueggemann and Goldingay have touched on this, but it needs to be put firmly on the agenda of hermeneutical studies. Who will demonstrate how the Holy Spirit, ‘who will guide you into all truth’, really makes a difference?