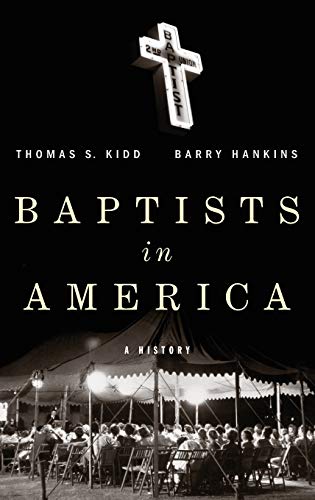 Baptists in America: A History

Thomas Kidd and Barry Hankins provide a familiar outline of Baptist history in America beginning with the recognition of Baptists being treated as outlaws in the 17th century and concluding with the depiction of Baptists ousting some of their own in the 20th century. These bookends are representative of the respective academic strengths of the authors, as Kidd has published works on religion in the colonial era and Hankins has contributed titles on the Southern Baptist controversy that marked the end of an era. Between these bookends lies ample support for their conclusion that Baptists can be “insiders or outsiders in American culture, and are often both simultaneously” (p. 252), an observation that applies equally to Kidd and Hankins’s skill as reputable historians. Both are professors of history at Baylor University but their status as Baptist insiders is hardly noticeable in light of their inclusive approach to the multifaceted nature of the Baptist family and their evenhanded examination of controversial matters that produce Baptist family fights. Together they deliver an informative work that should become the definitive statement on Baptists in America for years to come.

In the interest of full disclosure, I have recently co-authored a book on Baptist history, along with Nathan Finn and Michael Haykin, entitled The Baptist Story: From English Sect to Global Movement (Nashville: B&H Academic, 2015). As the title suggests, we focused on Baptists worldwide. This approach allowed us to explore the breadth of the Baptist movement but prevented us from exposing its depth in various areas. By focusing on Baptists in America, Kidd and Hankins provide depth to their story. Although the overall storyline is familiar, the people are presented with personality, issues are rooted in ideas, and movements are given momentum.

For example, personalities are evident as nearly every chapter begins with an historical illustration that introduces the subject that follows. The whipping of Obadiah Holmes leads to the discussion of Baptists as outlaws (p. 1); the conversion of Jacob Bowers following an earthquake introduces the topic of the Great Revival (pp. 76–77); the silencing of an outspoken slave named Winney highlights the injustice against African-American Baptists (p. 98); and the audacious move by Billy Graham in removing a barrier dividing blacks from whites at his Chattanooga crusade begins the chapter on Baptists and the Civil Rights Movement (p. 211). The authors weave similar such stories throughout the text.

The content of the chapters is impressive. Kidd and Hankins provide substantive discussion on issues pertaining to persecution and disestablishment, awakenings and institutions, missions and anti-missions, participation in and perspectives on war, and schism and consolidation, to name a few. Such topics are covered with due attention given to movers and shakers of Baptist life but local congregations and lesser-known Baptists are not overlooked. For example, the impact of Francis Wayland in the wider American culture is presented alongside a small Baptist church in Cades Cove, Tennessee reacting to cultural change (pp. 122–23); and the Supreme Court’s decisions eliminating prayer and Bible reading in public schools are seen through the eyes of Dr. Martin Luther King Jr., as well as the editors of the Alabama Baptist whose names were otherwise lost to history (pp. 206–8). By connecting the contributions of major players with minor participants, Kidd and Hankins recognize that the bulk of Baptist life takes place on the local level, an observation that Baptist insiders can readily appreciate.

The shift between insider and outsider status occurs frequently in the book. The authors note, for example, that Baptist attempts to position themselves as cultural insiders have provided only a temporary reprieve from cultural disdain. Thus Northern Baptists, who distanced themselves from fundamentalists by embracing modernism, soon found themselves excluded from their newfound liberal company for not being modern enough (pp. 193–95). Consequently, when Baptists addressed issues on the national level their interplay with the wider culture is presented in reactionary terms. Kidd and Hankins agree, therefore, with Mark Noll’s assessment that “Baptists offer attitudes and dispositions but not much in the way of distinctive theological, intellectual, or academic positions” (p. 248). This is to say, as is evident throughout the book, that Baptists have been more successful at turning on each other than they have been at turning around American culture.

Critiques of this book should be limited, partly because it is quite an exceptional work and partly because one does not want to reinforce the claim that “Baptists are notorious for two things – evangelism and schism” (p. 251). Thus, the suggestions that follow are simply personal preferences that are in no way designed to undercut this fine book. First, the placement of pictures is somewhat puzzling. The decision to include a total of nine photos in the middle of the book leaves one wondering why more pictures were not included at more appropriate junctures. Second, the presentation of two separate chapters on black and white Baptists, which follow two previous chapters on slavery, seems to accentuate the racial divide among Baptists as it relates to the larger narrative of insider/outsider status. To be sure, the issue of race relations is one that Baptists still need to address more fully and one is not suggesting that the historical record be whitewashed; but one would prefer a more perfect blending of black Baptist history within the larger narrative so that their contributions are seen as having an equally important impact. Finally, though the authors give equal time to moderates and conservatives in the inerrancy controversy among Southern Baptists, the appearance and progress of the Cooperative Baptist movement is strangely absent. Attention turns instead to how conservative Southern Baptists began taking their stand against culture. The question of what happened to the “losers” is never answered.

Baptists in America is a book worth reading because the story is told with clarity and zest. It is a book worth owning because it has substance and depth. It is also available in an audio version through Audible. The fact that two Baptist professors have published a book through Oxford University Press complete with professional narration speaks not only to the value of the work but ironically supports the thesis that Baptists can be insiders or outsiders, and sometimes both simultaneously.