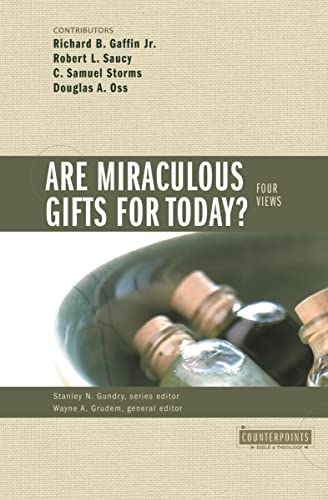 It is unfortunate to note that the disagreement over the work of the Holy Spirit in the contemporary church has tended to produce more heat than light but this very helpful book does not fit that pattern.

The format of the book is sensible and straightforward. There are four contributors who each reflect a different theological background. Richard B. Gaffin represents the ‘cessationist’ case. Robert L. Saucy develops a framework under the title ‘open but cautious’. This particular position is probably the most popular among evangelicals today and yet is also the most ill-defined. C. Samuel Storms writes from the perspective of the more recent charismatic movement now often referred to as the ‘Third Wave’. Finally, Douglas A. Oss presents the traditional Pentecostal viewpoint. Each contributor writes a lengthy statement of their own position and the other contributors have their opportunity to respond. Gaffin opted to make a single response to both the Third Wave and Pentecostal accounts in order to avoid repetition. The book is completed by a short concluding statement from each contributor and from the editor, Wayne Grudem.

The discussion is marked by the obvious desire of the participants to understand, respect and interact with alternative views. While significant differences remain, all the contributors make clear their sense of working within the same evangelical confession and being part of the same body. The book forms a useful and perceptive text on miraculous gifts and is complemented by an exhaustive set of indexes. There is no bibliography but the copious footnotes provide an excellent reference to further reading and secondary sources. It will be of most use to ministers or undergraduate students concerned with pastoral issues.

The aim of the book is very specific and does not wander from its concern with the gifts. This narrow focus reflects a major debate among evangelicals and this book will certainly clarify that particular debate. However, one may wonder whether it would be more fruitful to engage with the broader question of the work of the Holy Spirit in Scripture and in history. More interaction with wider theological issues such as the Spirit in the world and the relationship to other religions would have helped to clarify the implications of these four views to contemporary questions. Further reference to the work of non-evangelicals and a discussion of the treatment of the Spirit in Church history would have brought the positions into sharper relief. The concern with spiritual gifts is very pressing and understandable but it seems inevitable that such a discussion will produce little fruit.

Gaffin’s cessationist account of the gifts is quite distinct from that of the other contributors who otherwise differ from one another more as a matter of degree that of kind. The differences between these latter writers being primarily the extent to which certain gifts should be actively sought and expected in the normal life of the church. There is some helpful clarification of how these different perspectives shed light on the meaning of prophecy, tongues and Spirit baptism in the NT.