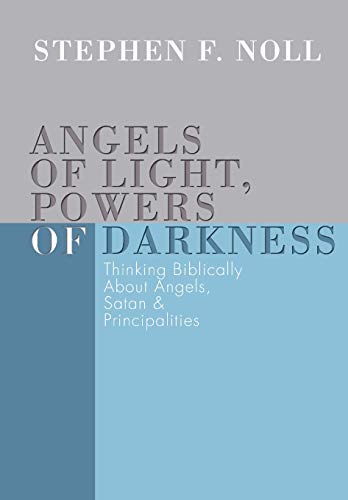 Angels of Light, Powers of Darkness. Thinking Biblically about Angels, Satan and Principalities

Stephen Noll began investigating angels long before it became a fad. Under the supervision of the late Professor F.F. Bruce at the University of Manchester, Noll researched and wrote his Ph.D. thesis on the topic of ‘Angelology in the Qumran Texts’. Now Noll has sought to provide for the church a holistic biblical-theological treatment of angelology.

Noll approaches the topic as a believer in the actual existence of this realm of beings. In fact, his hope is that his volume would contribute to ‘rehabilitating our knowledge and appreciation of our invisible heavenly companions’. He warns that disbelieving the personal character of evil is ‘playing with hellfire’. Consequently, he eschews the prior generation of modern interpreters who dismissed the biblical evidence regarding these intermediaries as artefacts of a primitive worldview. Noll finds more in common with the interpretations of Karl Barth. John Milton, and in some ways, even Frank Peretti.

This book, however, is not an apologetic for angels, nor does it contain much speculation. It is a descriptive biblical theology that attempts to find answers to some of the questions we might bring to the text—where the Scripture is silent, Noll remains silent. Yet the point of the book is that the Bible has a lot to say about angels. Given this purpose, the book is quite successful. Noll expertly guides the reader in grappling with the key texts and synthesising their meaning against the backdrop of the ancient cultures standing behind the texts.

A strong theme in Noll’s book is the prominence of the divine council, which he interprets as a group of angels through whom God indirectly rules the nations of the world (see, for example, Deut. 32:8–9; Pss. 29, 82, 89; Job 1–2; Zech. 3; Dan. 10:12–14, 20–21). These ‘sons of God’ have become corrupt, led the nations away from God and into idolatry, and correspond with the ‘principalities and powers’ in Paul’s letters. Noll contends that the work of Christ, represents a ‘palace revolution in the heavens’, but that the officials of this deposed regime continue to function as if nothing has happened. Herein lies the struggle faced by the church today. Yet a time is coming when the Messiah will come and put an end to the rebellion, pacifying the rebellious members of the divine council.

This overall portrait of the biblical drama is presented in a compelling fashion. It has long been an undervalued and neglected way of understanding life from the divine perspective. It corroborates much of what Gregory Boyd has recently argued is the ‘warfare worldview’ of Scripture in another IVP volume entitled, God at War.

At the end of each chapter, Noll provides a few pages of ‘theological reflections’ where he attempts to draw out the implications of the text for contemporary faith and practice. These are very helpful sections and provide Noll with the opportunity to address many contemporary questions, such as ‘Can Christians Have Demons?’ and the issue of combating territorial spirits. Noll’s handling of these issues is all too brief, but nevertheless insightful and suggestive.