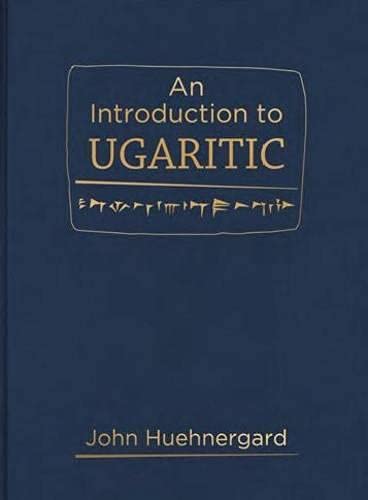 An Introduction to Ugaritic

Gifted and motivated language students have always been able to learn a new language from almost any sort of grammar. Indeed, I suspect that some of us who actually enjoy language learning much prefer the no-nonsense format of a reference grammar, where we can more quickly access comprehensive treatments of the structure of the verb system, the nominal system, the adjectival and verbal patterns, and so on, instead of having to wade through graded exercises and lesson-specific vocabulary lists, waiting impatiently for the time when we can actually get on to reading real original texts.

In 1965, as a grad student at Yale, I was introduced to Ugaritic inductively. We started reading the Keret Epic (as it was then called; “Kirta” was virtually unheard-of) not only without vowels but also without much concern for vocalization, and we had only Cyrus Gordon’s pioneering but imperfect Ugaritic Grammar to work with. When we needed a meaning for a set of consonants, Arabic, with its seemingly endless combinations of vocalizations and wildly differing meanings for the same set of consonants, usually provided a plausible option if Hebrew, Aramaic, Akkadian, and other Semitic languages failed us. As we went along we got better and better at feeling out the language, and we self-corrected. But all the while we were reading what the ancients actually wrote.

However, most of us also realize that many of our students simply can’t wrap their minds around a language that way. They’re not incompetent; they simply need the incremental approach that an elementary, deductive grammar provides if they are going to learn a new language. They need the gradual introduction of complex concepts and elements; they need a progressive series of lessons of roughly the same length with vocabulary lists and exercises to test their progress; and they need to take baby steps with simple verbs, and then gradually more complex ones, before they can handle a full overview of a verbal system.

It seems to me that the study of an ancient language comes of age when beginning students have the luxury of choosing among several introductory grammars that do those very user-friendly things just described. This has now happened for Ugaritic. Although a variety of sophisticated scholarly reference grammars for Ugaritic and studies of various aspects of its grammatical structure have appeared in the last half-century, it is only in the last few years that true first-year Ugaritic learning grammars have appeared in English that reflect both a sophisticated understanding of the language and pedagogically solid methods.

The first of these to appear was by William Schniedewind and Joel Hunt, A Primer on Ugaritic (Cambridge University Press, 2007). It is an excellent beginning grammar, and in many ways has set a high bar for all successors. It is now joined by two worthy competitors on either side of it on the continuum from basic to advanced. Michael Williams’s Basics of Ugaritic, as its title hints, is truly a beginner’s grammar, but a good one. John Huehnergard’s An Introduction to Ugaritic, gives beginners a starting point, but also moves its readers well beyond the first semester, and provides considerably greater detail in a variety of areas.

First, an overview of Williams’s Basics. Did you ever see one of those books in the “for Dummies” series like Windows 7 for Dummies or Investing for Dummies? They really aren’t for dummies at all and actually do a pretty good job of making sure that their readers aren’t dummies when they finish the book. What they do, even via their titles, is to start with concepts, explanations, writing style, and vocabulary that are so simple and clear that they reassure rather than intimidate someone who is anxious about having to try to learn about a given subject. Williams does the same for Ugaritic. His grammar has only 143 pages, but he does a fine job of taking the student through the essentials of Ugaritic, introduced by a chapter titled “Ugaritic in a Nutshell” written in an easy-to-follow outline/bullet point format, and concluded by a set of appendices that include a vocabulary list and exercise answer key. In between are twelve lessons, as follows: Lesson 2, Language Basics, including writing/deciphering the alphabet; Lesson 3, Nouns; Lesson 4, Adjectives; Lesson 5, Prepositions; Lesson 6, Pronouns; Lesson 7, [Strong] Verbs; Lesson 8, Moods; Lesson 9, Infinitives; Lesson 10, Thematic Stems; Lesson 11, Weak Verbs; Lesson 12, Adverbs; Lesson 13, Conjunctions, particles, etc.

Williams consciously tries to be simple, but is never simplistic. He regularly eases the student into the terminology of grammar. For example, the first sentence in Lesson 4, Adjectives, is “Adjectives modify (i.e., tell us something about nouns and pronouns).” The second and third sentences in that lesson, under the title “Inflection,” read “Don’t panic. ‘Inflection’ simply means the way a word looks with all of its extra endings . . . ” If you think those sorts of explanations are too elementary, you haven’t taught today’s graduate students. But Williams also moves students quickly on to the serious concepts, paradigms, and important explanations. He also offers regular guidance via annotated bibliographies, so that a motivated student knows where to find and what to expect from relevant articles and other resources in various languages—not merely English.

What Williams does not do is make students read much Ugaritic. The exercises are extremely short—just a few phrases or short sentences in each lesson, usually from isolated bits of the Baal and Anat cycle, and there is no reading through any actual Ugaritic text. I think this is a limitation. Williams obviously has designed the book to be finished in a single semester via a once-a-week class, but a few more pages at the end, containing some complete texts, would ease students into the language as it actually looks in extended passages. Of course, any of us who teach Ugaritic can make up our own chrestomathy for our students easily enough, but why not include a basic one as part of the appendix to a beginning grammar? After all, the student must start reading texts once he or she has covered all the basics, since that’s the purpose of covering the basics. It’s possible that Williams felt that a section of text readings would only clutter an otherwise clean and crisp presentation of the essentials, but surely that would not happen if the readings were placed in an appendix. Indeed, a self-learner relying on Williams’ grammar would not necessarily finish the book with any confidence about where and how best to start reading the actual literature of Ugarit.

Huehnergard’s Introduction is considerably more extensive in its presentation of grammatical forms and its discussion of grammatical concepts, spends much more time on phonology, has a varied chrestomathy of Ugaritic documents, an extensive bibliography, twenty-three pages of photographs of tablets and excavation sites, and several times more material in each of the exercises accompanying the lessons. But it’s also much more likely to be daunting to a beginning student.

Huehnergard has organized his Introduction as follows: Chapter I introduces the language and its Semitic connections, text finds, types of texts, tools and resources, and the connections of Ugaritic to biblical studies. Chapter II reviews the orthography of the language. Chapter III addresses phonology. Chapter IV extensively covers morphology (parts of speech, numerals, the verb system, prepositions, adverbs, particles, and conjunctions). Chapter V treats syntax briefly, and Chapter VI discusses succinctly the nature of Ugaritic poetry. At the conclusion of that chapter (p. 87) the grammar of the language has been covered.

Then come three fairly extensive learning lessons, i.e., vocabulary lists and practice exercises, in Chapter VII. The following chapter, VIII, introduces a varied selection of actual Ugaritic texts for reading, subdivided as follows: a group of letters, a group of legal texts, a group of administrative/economic texts, the Kirta story, and, finally, the Baal and Yamm story. Each of the reading texts is accompanied by a thorough set of explanatory notes. Chapter IX provides a glossary covering, as far as I can tell, every word appearing in any of the reading texts or exercises texts. A strength of this glossary is its systematic inclusion of attested cognates from biblical Hebrew and other Semitic languages.

The book finishes with a bibliography of about 270 entries on all things Ugaritic, but especially the grammar, followed by appendices on the nature of the alphabetic script (this appendix is written by John Ellison), a key to the practice exercises and reading texts, paradigms, an index of texts cited, and the aforementioned set of photographic plates.

So which of the two grammars would work best for a beginning student, seeking to learn the language on his/her own? If the student is anxious about the challenge, knows some Hebrew already but is not especially gifted at language acquisition, Williams’ Basics would be an excellent choice. It’s the patient, ultra-clear, simple, user-friendly option. On the other hand, for a self-learner who already knows one or two Semitic languages well and has no fear of plunging into another, Huehnergard’s Introduction gives more, demands more, and takes the student much farther into the ancient texts.

Finally, a suggestion for teachers of Ugaritic. If you’ve got a class of students of mixed ability in a one-semester Ugaritic course, students whose only other Semitic language is Hebrew, and their comprehension is only at an intermediate level at best, and you want most or all of them to be able to get through Ugaritic grammar responsibly in that single semester, Williams’ Basics would be a fine, solid choice. For a class lasting a full year, or for a highly motivated and competent group of students with the time and energy to put in the necessary effort in one semester, Huehnergard’s Introduction will likely ensure a somewhat more detailed mastery of the grammar and considerably more skill at reading the texts.