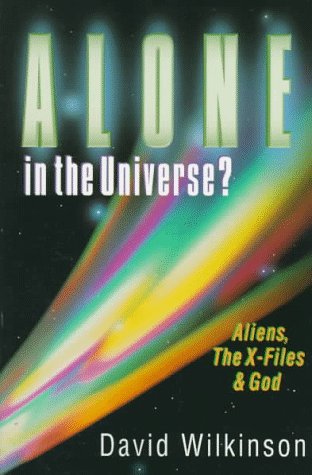 Alone in the Universe?

David Wilkinson is a Methodist Chaplain at Liverpool University, England and also a Fellow of the Royal Astronomical Society, having done research in Theoretical Astrophysics. He takes seriously the current interest in the possibility of extra-terrestrial life (ETL). At the popular level this is evidenced by TV series, films, books and magazines which deal with the subject. There are also scientist who are convinced that ETL exists and have given backing to multi-million dollar projects, such as the Search for Extra-Terrestrial Intelligence.

In the first half of this book Wilkinson gives a fair and balanced survey, at a popular level, of the scientific arguments and evidence for the possibility that there is ETL. He points out that what interests most people is not just extra-terrestrial life (bacteria on Mars, for example) but extra-terrestrial intelligence (ETI). Assuming a natural evolutionary process, there is no guarantee that the conditions which might give rise to simple forms of life would then allow it to develop into intelligent life. The scientific arguments regarding the probability of the existence of ETL are based on probability assessments, which themselves depend on assumptions which are based on very little evidence. The astronomers are more positive about ETI than the biologists. Wilkinson suggests that the biologists have a more realistic understanding of the probabilities.

There is then a brief, but telling, critique of claims of evidence for ETI based on UFO sightings, crop circles, and abductions by aliens from outer-space. The following chapter deals similarly with those who, in the spirit of Erick von Daniken, try to explain the biblical record as the result of visits from outer-space. The chapter includes a brief defence of the orthodox Christian understanding of Jesus’ birth, ministry, death and resurrection.

This leads into a discussion in the next chapter of the claims made by some serious writers on the topic that the existence of ETI would cause major problems for traditional religious, especially Christian, beliefs about the origin of life, humanity’s special relationship to God, the significance of Jesus and our understanding of God. These issues are not new. Although Wilkinson limits his discussion to what Christian scholars have said in the 20th century, patristic and medieval theologians debated them, since the possibility of extra-terrestrial life was raised by both the Greek atomists and the Roman Stoics. Although discovery of ETI would raise difficult questions, the Roman Catholic theologian Stanley Jaki has suggested that it is only the theist who can look forward with confidence to such an encounter, trusting that both sides will have a common Creator and a sense of belonging to the same family. Wilkinson agrees with this, and argues that, far from undermining Christianity, such an encounter would ‘open up even more of the glory and stunning creativity of the God revealed to us in Jesus’ (p. 136).

The final chapter contains an analysis of the spiritual desires behind the current interest in, and in some cases longing for contact with, extra-terrestrial intelligence. There is a brief indication of how Christianity can satisfy these desires.

Opportunities to commend the gospel arise in unexpected places. While we might be tempted to dismiss interest in UFOs and ETI as just too off-beat to be taken seriously, Wilkinson has shown that there is a spiritual hunger and a range of theological issues here which need to be taken seriously. He has addressed them well at a popular level. It is to be hoped that some theologians will be stimulated to take up the theological issues afresh and develop them at a level which could not be done in this book.