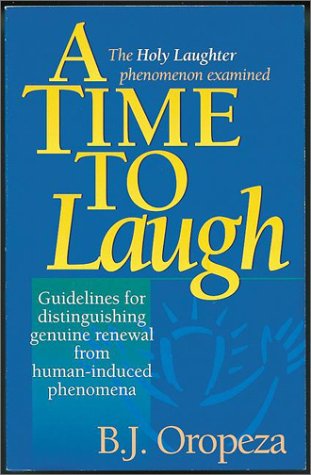 A Time to Laugh

This book, written by someone who is happy to describe himself as a charismatic insider, is an eminently readable account of what has come to be known as the ‘Toronto Blessing’. In the first part of the book, Oropeza summarises the controversy surrounding the ‘Toronto Blessing’, traces its influence across the world and examines its roots. This part is essential reading for those who seek to understand the immediate historical background to the movement, its leading proponents and their teaching. Oropeza covers the ground thoroughly and with critical discernment. His chapters in this section on the teachings of Rodney Howard-Browne, the roots of the movement and the spirit behind the movement are particularly important contributions to the debate concerning the ‘Toronto Blessing’. Although highly critical of Howard-Browne’s writings and some aspects of his public ministry, Oropeza concludes that he is not ‘a mass-hypnotist, charlatan or a cultist’. Oropeza’s chapter on the roots of the movement traces links to the aberrant ‘Latter Rain Movement’; this chapter also raises crucial questions concerning ‘Toronto Blessing’ prophecies of an imminent end-time revival. In the next chapter, Oropeza examines some common criticisms of the movement including whether the ‘Toronto Blessing’ is a form of mass hypnosis and whether it leads to altered states of consciousness. He is basically sympathetic to the movement, concluding that it represents renewal rather than revival, but is critical of the disorderly conduct often exhibited at ‘Blessing’ meetings and urges ministers involved in the renewal to take steps to deal with such conduct. My main criticism of this section of the book is that Oropeza does not interact with the work of sociologists of religion such as F.D. Goodman, who demonstrates that groups can be taught both dissociation and glossolalia by a charismatic leader. This would have led to a more nuanced discussion of the question of mass suggestion.

In the second part, Oropeza discusses biblical and historical precedents. The first chapter in this section is a competent analysis of the biblical arguments used to support the phenomena associated with the ‘Toronto Blessing’. He rightly concludes that biblical passages are either misused or are not intended to be normative. The next chapter examines the phenomena in the light of Paul’s injunction in 1 Corinthians 14:40 that everything should be done in an orderly way. Oropeza argues that Paul’s injunction should be read against the background of Dionysian ecstasy at Corinth. Although this position is too simplistic, Oropeza’s conclusion is, in my opinion, correct. He concludes that Paul deals with the problem of ecstatic phenomena at Corinth by exhorting the Corinthian Christians to behave in an orderly fashion. This is a very important observation given the disorderly nature of many ‘Toronto Blessing’ meetings.

In the next two chapters, Oropeza looks at phenomena in previous revivals in the eighteenth to twentieth centuries. He demonstrates both that the phenomena experienced in the ‘Toronto Blessing’ have been seen in previous revivals and that such phenomena have been exceedingly problematic. In a balanced assessment, he concludes that revivals have always contained a mixture of good and bad. He argues that there have often (not always) been unusual phenomena accompanying past revivals but that wise revival leaders such as Jonathan Edwards insisted that such phenomena neither authenticated nor disproved a moving of the Spirit, In the light of this, despite Oropeza’s recognition that the focus of the ‘Toronto Blessing’ has been on unusual phenomena, he fails to be sufficiently critical of that focus.

The final chapter, after warning against divisiveness and pride, ends with a passionate plea to those in the church who are so concerned about personal renewal that they fail to reach out to the marginalised. Oropeza rightly argues that genuine revival will have tangible socio-political implications. My main concern with the second part of the book is that Oropeza, whilst recognising the mixed character of revivals, appears to be insufficiently critical of the concept of revival itself. It seems, at least to this commentator, that revival language is too closely linked to an ideology of power and, as such, is highly problematic.