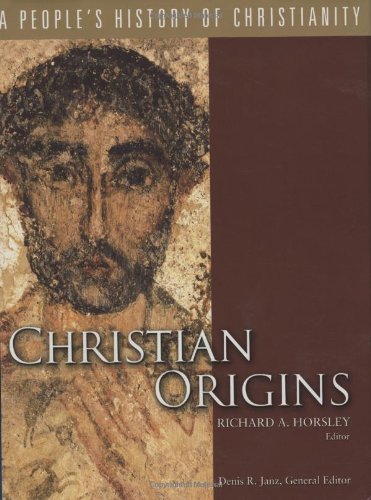 These are the first two of a projected seven-volume series covering the history of Christianity from the beginning up to the present time. Seldom if ever can there have been a series with a more clearly ideological purpose. The unwary might suppose that it is aimed at a popular audience, but this is not the case. By ‘people’s history’ the authors mean a history of the grassroots of Christianity. They purposely ignore the great names the well-known political events and the famous doctrinal controversies which are the mainstay of most church histories, and opt instead for a semi-anecdotal account of how ‘ordinary Christians’ lived. The editors are very honest in admitting that evidence for this is thin, especially in the ancient period where so much has bee lost. Written texts, other than papyri recovered from Egypt, are of little help because contemporary Christian writers were seldom interested in everyday matters, and a good deal has to be gleaned from other sources, most of them archaeological.

The result is a detailed study of the social and economic background of the early church, which is only incidentally supported by direct textual references. To get some idea of what this means, consider the following remarks about ‘Matthew’s people’:

Most of those who listened to Matthew’s Gospel in the late first century experienced tough living conditions. Regular food shortages, squalid conditions, hard work, sickness and poverty marked the life of those followers of Jesus in one of the largest cities of the Roman Empire … The Gospel offers a frequently contestive vision and alternative identity and way of life, even while enmeshed in and imitating imperial values and practices. Matthew’s Gospel was probably written in the 80s CE. The community for which it was produced is usually located in Antioch.

Generalities of this kind are typical of the approach taken by the history as a whole. At one level it can scarcely be doubted that life in the first century was ‘tough’, but did contemporaries think of it in that way? We have very little idea of when Matthew was written and no evidence that it was in any way connected with Antioch. The author makes assumptions without any real discussion of the issues, and then proceeds to tell us what the proletariat in late first-century Antioch had to put up with, whether this has anything to do with ‘Matthew’s people’ or not!

Jesus himself is given a significant role in the origins of Christianity, but since the history excludes anything which smacks of a theological interpretation of him, what we are left with is a series of ‘Jesus movements’ which seem to have sprung up more or less spontaneously and which were articulated by men like Mark and Q, who is identified as a specific individual and regarded as a major architect of early Christian beliefs. Poor John, on the other hand, is dissolved into a committee, though it is recognized that some of its members were close to the original events and thus able to transmit a genuine historical flavour in the Fourth Gospel.

Once we leave the New Testament period behind, the emphasis is squarely on background information. The status of the poor, the nature of the family, the character of ancient slavery—all these things are given full treatment. The second volume is especially rich here, perhaps because, after the legalization of Christianity in the fourth century, there is a great deal of ‘Christian’ evidence for such ordinary things. The first section is called ‘hierarchy and subversion’, which might be a subtitle for the series as a whole. Anything and everything is pressed into service in an attempt to prove what the ancient Christians thought and did about things like class, gender and social inequalities. Once again, what we find is modern political correctness and its sense of ‘justice’ being used, not only as a framework for interpreting the Roman world but as the benchmark for judging what Christians actually believed. On the rare occasions when the authors venture into the written record of the early church, it is almost invariably because they have found something which appears to support their theories and which is taken over accordingly. A good example of this is the hymn written by Prudentius (about ad 390) in honour of the twelve-year-old martyr Eulalia. The author of the chapter on martyrdom recognizes that Prudentius was probably not thinking about what we would call ‘gender issues’, but this does not stop her from using the hymn as evidence to assert that in martyrdom, women achieved equality with men both as priests and victims of the sacrifice they were making on behalf of Christ! Such a thesis cannot be crudely denied, of course, and it is clear that men and women suffered martyrdom in equal measure and received the same reward for it, both in this life and in the next. But did anyone see martyrdom as a device for asserting male-female gender equality? This is not so much wrong as odd—people in the ancient world did not ask that kind of question and did not interpret events in that way.

What the ancients worried about was the status of their communities and their teaching, something which was determined by the degree of its conformity to the apostolic norm. To have been baptized by an apostle (or someone who could legitimately claim apostolic authority) mattered a great deal, as did the preservation of apostolic teaching and its authority. Such concerns would be dismissed in these volumes as ‘élitist’ and perhaps they were. The early Christians never supposed that their faith could be determined by consensus, or even by a majority vote at some council meeting. It was a gift of God, who in terms of this history might be described as the ultimate élitist, and was given to the church, not pieced together by it. Controversies over the precise content of Christian belief were common, but those who engaged in such disputes invariably looked to a higher authority in order to resolve them. They would never have thought to sample public opinion, nor would it have crossed their minds to rummage around in garbage dumps, looking for scraps of papyrus which might reveal some unusual perspective on events. They left such tasks to the scholars who have written these books, and would almost certainly have regarded their conclusions as either too banal to need stating or else fundamentally misguided. The ancients would have thought that these rewriters of church history had missed the point of it entirely, and it must be said that a similar conclusion would probably be drawn by almost everyone who has written on the subject since.

This is not to deny that these books make a valuable contribution to our understanding of the ancient context in which Christianity emerged—that, they most certainly do. But whether they have grasped the heart of the matter is much more doubtful. The student and the general reader would be well advised to stick with the traditional, historico-theological approach to the data and use these books as a stimulating alternative to the standard story, though one which tends to raise more questions than it can answer on the basis of the available data