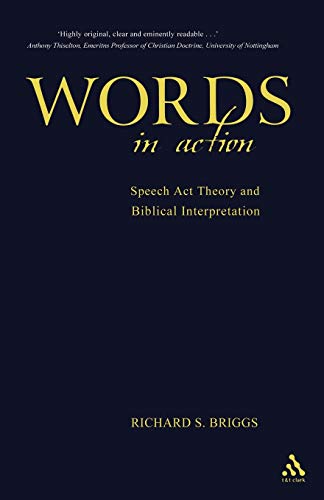 This book started out as a PhD under the title Speech Act Theory and Biblical Interpretation; Toward a Hermeneutic of Self-Involvement. It has been revised to make it more accessible to a wider readership. However in the opinion of the reviewer, it has not sufficiently revised so as to make it as accessible as it could have been. Much of the discussion takes place at a highly technical level, assuming a degree of familiarity with the primary literature which very few will have. This is not a book that serves as an introduction to speech act theory and the role it plays in biblical interpretation. One is better advised to look elsewhere, such as Kevin Vanhoozer’s contribution in Hermeneutics, Authority and Canon, edited by Carson and Woodbridge. Nonetheless, this volume is a valuable resource and is highly suggestive of productive ways forward in using the insights of speech act theory in helping in our understanding of how Scripture functions.

The book is divided into two parts.

There is a helpful introduction in which the rudiments of speech act theory, as developed by J. L. Austin in his How to Do Things with Words, are outlined and what speech act theory is not capable of achieving is underscored. Here Briggs indicates an important element which has often been neglected in hermeneutics and which speech act theory can be called upon to elucidate, namely the concept of self-involvement as initially developed by Donald Evans.

Part 1 of the book focuses on the matter of speech act theory itself, as propounded by Austin, and developed by Searle. In particular there is a particular consideration of Searle’s distinction between brute facts and institutional facts. The significance of this distinction for biblical interpretation is taken up in the second part of the book. There is also some helpful clarification which takes place between strong illocutions (such as commands and promises) and weak illocutions (flat stating assertions). Briggs also engages with the work of Derrida, Fish and Rorty with a highly significant discussion on the role of construals, what statements are take as by the recipient and what effect they might have. This is then tied to a theology of the imagination.

In the second part of the book Briggs considers self-involvement in NT Speech Acts. He begins by expounding and critiquing the work of Donald Evans and then analyses three different speech acts that we find in the NT in order to see what actually happens in each case, namely, confessions of faith, forgiveness of sins and teaching. To my mind these three chapters are amongst the most interesting and exciting in the whole book and one would hope to see more coming from the pen of Briggs, developing in more detail what is suggested here.

This is a book that would be immensely valuable to those who may be engaging in the field of hermeneutics and at post-degree level and as such is to be highly commended. What would also be welcome is a book which engages with the same issues but at a much more basic, introductory level.

The Reverend Melvin Tinker is senior minister of St John, Newland, Hull, UK. He has contributed a number of articles to Themelios over the years and is the author of several books, his latest being Intended for Good: The Providence of God (IVP, 2012).