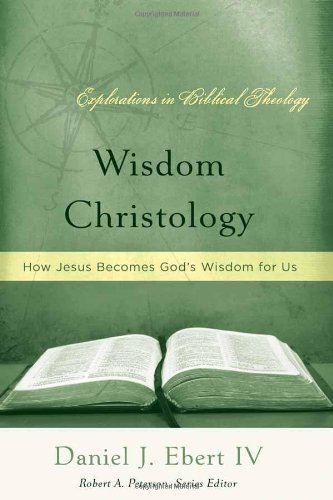 Wisdom Christology: How Jesus Becomes God’s Wisdom for Us.

Part of the Explorations in Biblical Theology series, Ebert’s book examines the various NT texts that speak of wisdom in connection with Christology.

After an introduction, Part 1 examines the wisdom theme in the Gospels of Matthew and John, which has often been read against the personification of wisdom found in the wisdom literature (e.g., Prov 8). Carefully moving through the several passages, Ebert shows that finding “Lady Wisdom” in the background is sometimes “a stretch” and other times, although possible, unnecessary. Instead, “Jesus, explicitly identified as God’s Son and qualified to reveal the Father, who invites us to find rest in him and receive his wisdom” (p. 29). He is “presented as the culmination of God’s word to his people . . . taking the place of Wisdom and Torah . . . the revelation of God” (p. 32).

Ebert helpfully recognizes the importance of the concrete revelatory event of the cross of Jesus Christ:

God’s wisdom in Christ is not merely an idea or a theoretical construction. It is grounded in historical events whereby God uniquely reveals himself. . . . God’s wisdom in Christ is particular, historical, and counterintuitive to human reason. It involves the incarnation of God’s Son, his death on the cross, the triumph of the resurrection, the sending of his Spirit, and the promise of a glorious re-creation of the world. (p. 11)

Part 2 develops these ideas by following through the wisdom theme in 1 Corinthians, Colossians, Philippians, and Hebrews. In 1 Corinthians, Paul deals with “inappropriate competitiveness based on confidence in human wisdom” (p. 61). To this pastoral problem, Paul applies the cross of Christ, for “wisdom is in the crucifixion of Christ, with all of its implications for church and world” (p. 66). In Colossians, Paul counters the threat posed by Jewish reaction to the gospel (p. 88), once again by pointing believers to Christ: “this is wisdom: the Son as the revealer of God, the sustaining Creator and center of the universe, and the Redeemer who brings redemption and peace” (p. 104). The christological hymn in Phil 2:5–11 once again points to “the cross as the locus of God’s redemptive wisdom in Christ, and the cross is also the wisdom-way for the life of the church” (p. 135). As already seen in the texts previously studied, the Christology of the Epistle to the Hebrews can be distinguished from intertestamental wisdom speculation (p. 170). But Hebrews offers “more advanced wisdom concerning Christ’s person and work” (p. 171), “God’s wisdom in his Son, our Great High Priest, calls us to hold fast to the faith . . . to draw near . . . and to go on to maturity” (p. 171).

A concluding chapter summarizes the findings and addresses how to live in the wisdom of Christ. The wisdom in Christ teaches us about God, salvation, the law (which is fulfilled in Christ), and how to live as the community of faith, humble in spirit and seeking peace and reconciliation.

This is an important study of the wisdom motif as it relates to Christology and human life. Something lacking, however, is the setting of this material against a strong expectation of the future and coming kingdom of God, leaving wisdom largely explained in terms of this-worldly behavior—an ethics without much of an eschatology. Nevertheless, there is much of great importance in this eminently readable volume.