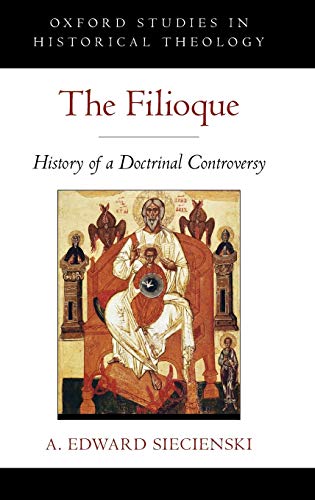 The Filioque: History of a Doctrinal Controversy

The filioque controversy is one of the more notorious clashes in church history. Not only is it seen as one of the (if not the) major issues dividing the Eastern and Western churches, but is often understood as a debate between two stubborn and unforgiving churches whose desire for subtle doctrinal superiority trumps unity. Siecienski provides us with a monumental achievement in breadth as he canvasses the filioque debates. Starting with the NT material on the procession of the Holy Spirit and moving through the debates to the twenty-first century, Siecienski offers a case study in church conflict. He goes far to show that any stereotyping of this debate is unhelpful, and he honestly assesses many situations where pride, language barriers, and political situations are the catalysts for driving a deeper wedge between East and West (rather than the doctrinal issues themselves). Siecienski’s overview reads like a narrative introduction to East/West relations where different eras of history prove to be more amenable (and sometimes decisively less so) than others. Furthermore, his assessment is fair and balanced, showing how both sides ultimately failed to prioritize the unity of the church over an issue that, at various times, was considered settled.

What was perhaps most interesting was the issue of the Catholic church using the filioque in its liturgy. Even when the issue was considered settled, where the East affirmed that a correct notion of filioque was both an ancient and adequate theologoumenon, the main worry was its use in both creedal and liturgical situations. This issue rests on both the insertion of the filioque into the creed itself, a move that the East has always denied as a legitimate use of power (when only an ecumenical council has the authority to do so), as well as the reality that a unified church needs a unified creed. This issue is particularly important because of the ecclesial implications in the Catholic church. Even Catholic scholars who affirm that the filioque should not have been added to the creed have a much harder time admitting that it should now be deleted. Therefore, even when the churches agree upon a proper usage of the filioque as well as the mistake the Catholic church made in inserting it into the creed, it is the social and ecclesial ramifications that prove to be obstacles too large for the church to navigate (up to the present era).

At the heart of Siecienski’s historical analysis and advice for reconciliation is Maximus the Confessor. Siecienski traces through the filioque debates and shows that Maximus continually appears as a figure either the East or the West uses to invoke a via media between the two conflicting sides. The fact that both churches turn to Maximus throughout the debates and that Maximus himself attempted to craft a via media in the debates makes him an important figure both historically and theologically. Maximus emphasizes two key points in his “Letter to Marinus.” (1) The Latin teaching did not violate the monarchy of the Father because it affirms only one cause in the Godhead (i.e., the Father). According to Maximus, the Latin reading did not confess that the Spirit receives hypostatic existence from the Son. (2) The Spirit proceeds through the Son; this procession does not apply only to the economy (a common line of reasoning against the Latin West). Instead, there is an eternal relationship of Son and Spirit. Since the Father is the sole cause in the Trinity and the Father is always Father as Father of the Son, so the procession of the Spirit must be connected to the person of the Son. Therefore, a properly orthodox trinitarian ordering, according to Maximus, must include a notion of the Spirit proceeding through the Son as long as the Son is not given the Father’s causality (a move made by later Western theologians). In making this distinction, grounding his analysis in the Fathers and in a generous reading of both East and West, Maximus provides the space for common ground. Unfortunately, as Siecienski shows, this common ground was never utilized because other issues drove the two sides apart.

While it is generally unhelpful to critique a book that does so much for not doing more, there is one general critique I would like to make. Siecienski focuses his attention on mapping the political, ecclesial, social, and theological issues at play in the filioque debates throughout church history. In doing so he addresses the major forces at work behind the scenes of the argument itself. Unfortunately, at times, the theological seems eclipsed by the rest. There were, certainly, many driving factors of the debate that had nothing to do with theological issues at all, but the differing theological frameworks must certainly have played a large role. At various points throughout the volume Siecienski mentions the differing views between East and West on the relationship between “theology” (i.e., God’s life itself) and “economy” (i.e., God’s revelation in history). The East wanted to maintain a relatively robust distinction between the two, invoking a more broadly apophatic emphasis, while the West wanted to maintain a connection that did not collapse into identity. This issue, fundamental to the task of all theology (which, post-Rahner, should be clear), is only mentioned rather than meditated upon. It does not take much imagination to see how two different views on the immanent/economic relationship could lead to two differing theological cultures, such that communication between the two would break down over what otherwise might be considered minor issues. In other words, we could ask if the theological cultures drove the debate in an attempt to solidify the culture itself as “orthodox” and not simply the impossibility for theological agreement. I would have liked to see Siecienski develop the immanent/economic theme more throughout the volume and assess whatever import (if any) it had. Importantly, one of the moments where this issue is highlighted is in his exposition of Maximus, noting that he carefully differentiated and upheld the connection between immanent and economic. The emphasis on Maximus’s thought in this area points to the importance of addressing this issue for ecumenical understanding.

Even taking that critique into account, this book provides a fantastically broad and deep overview of the filioque debates. It is readable, assessable, and well-conceived, and would serve anyone interested in the doctrine of the Trinity, the filioque debates themselves, or East/West relations.