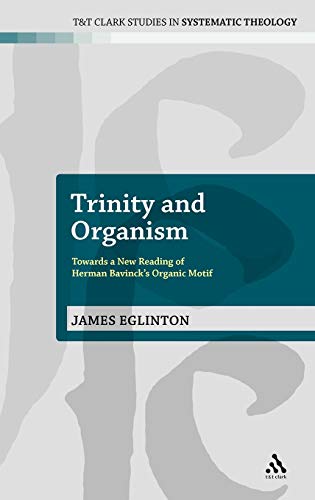 Trinity and Organism: Towards a New Reading of Herman Bavinck’s Organic Motif

With the relatively recent completion of the English translation of Herman Bavinck’s four-volume Reformed Dogmatics, the larger theological community has begun to familiarize itself with this important Dutch theologian. Consequently, Reformed Dogmatics is becoming a standard theological reference for a growing number of theology students, pastors, and theologians. Bavinck’s work offers readers not only a glimpse into one of the most influential theological minds of twentieth-century theology (Berkouwer and Barth both drank deeply of Bavinck before writing their own systematics), but stands as a high point in Reformed theology in the modern period. With this growing recognition of Bavinck’s achievement comes a desire to better understand what is at the heart of his accomplishment.

In steps James Eglinton’s Trinity and Organism. As the title suggests, Eglinton believes that the recurrent motif of the organic in Bavinck’s theology is more than a favorite illustration; rather, it is at the center of his trinitarian theology. Eglinton begins his volume by taking readers on a fascinating journey through the late eighteenth- and nineteenth-century theological and social movements that shaped Holland. As he expounds the debates that captivated the Netherlands during this period—Groningen’s ethical theology pitted against Leiden’s rigorously naturalist, mechanical, deterministic theology—the raison d’être of Bavinck’s own robustly orthodox retrieval for the modern world emerges.

But was Bavinck successful? In strong opposition to Jan Veenhof’s influential thesis that Bavinck is something of a Jekyll and Hyde figure—constantly shifting between orthodoxy and modernity (the so-called “two Bavinck’s hypothesis”)—Eglinton sees a much more sophisticated trinitarian motif unifying Bavinck’s vision. To evince this reading, Eglinton must undo Veenhof’s narrative surrounding Bavinck’s organic motif. Contesting the assumption that Bavinck’s frequent use of the motif represents little more than thinly veiled German Idealism foisted onto orthodox theology, Eglinton demonstrates (building on Brian Mattson’s recent work) that the motif finds its provenance not as a reaction to Kant, but as a reclaiming of Calvin’s own organic images. This being the case, Bavinck’s regular appeal to the motif is not a thoughtless swallowing of modernity, but an intentional appropriation of his Reformed tradition to subvert modernity. What’s more, Bavinck’s use of the organic motif as a paradigm for the unity-in-diversity that marks the triune life of God reveals him as a preeminently trinitarian theologian.

To underscore this thesis, the second half of the volume revisits the numerous ways Bavinck employs this trinitarian motif. Among these, none is more important for the centrality of Bavinck’s trinitarian vision than his theo-centrism. By subsuming dogmatics under the doctrines of Father (creation), Son (salvation), and Spirit (consummation), theology for Bavinck is nothing more or less than a discussion of the triune God. However, Bavinck’s trinitarian theology includes more than the doctrine of the Trinity proper—all of history and nature is tied into the triune life of God. This is amplified in both the economic work of God in redemptive history and the fascinating reworking of the vestigia trinitatis: all creation is faintly marked by the unity and diversity of the three-in-one God. As Eglinton aptly summarizes, for Bavinck “a theology of Trinity ad intra leads to a cosmology of organicism ad extra” (p. 68).

Additional chapters further unpack the organic in Bavinck’s doctrines of general revelation, Scripture, and ecclesiology. For example, when speaking about general revelation, Bavinck initially mutes his organic theme. Yet when introducing the role of Scripture and faith in general revelation, the return of the organic theme reveals that general revelation goes unnoticed unless aided by the triune God. Again, by viewing Scripture as a single organism (unity-in-diversity), Bavinck counteracted the higher criticism of his day. The diversity of Scripture’s authors, genres, and original audiences are pulled together by the triune God into a unified word that speaks through a diversity of voices. Or again, when addressing ecclesiology, Bavinck sees in the unity and diversity of the visible church not only an institution, but also the marks of an organism.

It is difficult to overstate the importance of Eglinton’s work for Bavinck studies. This volume convincingly overturns a paradigm that has stymied the field, and it does so in a way that elucidates one of the most creative theological minds in the modern period. What’s more, it does this while simultaneously offering an incisive overview of Bavinck’s theology. This accomplishment is all the more valuable given Eglinton’s rejection of a reading of Bavinck that ignores the problematic or unresolved issues in Bavinck’s thought. The result is one of the best companions to Bavinck’s theology in the English language. Eglinton’s work leads the way for a new generation of Bavinck scholarship keen to advance Bavinck’s vision for a capaciously Reformed, trinitarian orthodoxy capable of speaking with both integrity and relevance to our modern world.