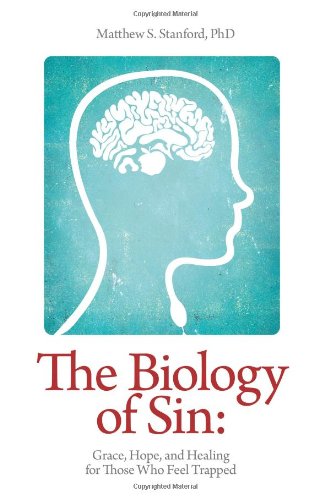 The Biology of Sin: Grace, Hope, and Healing for Those Who Feel Trapped

Regarding human nature, theologian John Murray has noted that man does not merely have a body; he is body. (Cf. “The Nature of Man,” in Systematic Theology, vol. 2 of Collected Writings of John Murray [Edinburgh: Banner of Truth, 1977], 14–22). Matthew Stanford, a professor of psychology, neuroscience, and biomedical studies at Baylor University takes this perspective to heart in his book, The Biology of Sin: Grace, Hope, and Healing for Those Who Feel Trapped. In it he attempts to synthesize for a lay audience brain-based research and biblical perspectives for a number of sinful behaviors. His goal is to recognize the biological predispositions that play a role in behavior the Bible defines as sinful, while always emphasizing the authority of God’s Word and the grace there is for those struggling with habitual sin.

He begins in chapter one by defining sin and discussing its origins in the fall. He contends that we

inherited from Adam, our biological father a physical aspect of sin, what I like to call “sinful DNA.” As a result of our sinful biology at birth, our physical and mental inclinations are only for self . . . . In relation to God, there is simply no good in us, neither spiritually nor physically. . . . It is out of a mind and body corrupted by original sin that actual sins come forth. (p. 8)

This view of sin undergirds his project to examine the biological basis of sinful behavior while maintaining a scriptural view of these same behaviors as sin for which we are held accountable before God.

He devotes the next chapter to anthropological and soteriological concerns. He maintains a “three-part unity of man: body, mind, and spirit. . . . God created us as three-part beings” (pp. 17–18). He sees the mind (soul) as the nexus between the brain (body) and the spirit. The state of fallen man is a damaged body, a carnal mind, and a dead spirit. He contends that sin is pervasive and affects all three levels of being. He highlights that through Christ we are transformed inwardly and are righteous before God, but that “abnormal biological predispositions, corrupt thought patterns, and sinful desires do not simply go away by themselves once we come to faith . . .” (p. 26).

With this foundation he dedicates chapters three through seven, respectively, to the following problems: rage (impulsive aggression), lust and adultery, lying and stealing (antisocial behavior), addiction, and homosexuality. Following a brief case study of the problem at hand, his approach in each chapter is to outline the biological (brain-based) underpinnings of the problem based on available scientific research. He also provides biblical teaching germane to the issue and then discusses how to minister to a struggling individual. Throughout he gives case studies of individuals who have been helped by biological treatments (e.g., medications) and/or by pursuing a relationship with God.

The book concludes with two chapters, one exploring the impact on the female victims of men struggling with these problems (ch. 8), and one reminding readers that biology is not destiny (ch. 9). He also includes an appendix of counseling and ministry resources for the problems he discusses.

There is much to commend about The Biology of Sin. Stanford is no armchair neuroscientist. He spends his days in the trenches of life with struggling men and women, which lends authenticity to his concerns and his writing. By drawing attention to biological correlates of sinful behavior, often neglected in Christian treatments of these problems, he rightly moves us away from a functional view of the person as a disembodied soul. He takes seriously the effects of the fall on our bodily constitution. In so doing he models a compassionate and non-judgmental approach for the struggler. Yet he remains balanced. He does not shy away from viewing the discussed issues as sin, nor does he minimize the need for progressive sanctification through the power of the Holy Spirit. He successfully avoids the extremes of biological determinism rooted in a reductive materialist view of the person and an overly spiritualized view rooted in neo-Platonic views of the person. His book serves as a corrective for imbalanced approaches in ministry, which too often tend toward either extreme in the actual care of individuals.

The book does have a number of weaknesses. First, he espouses a tripartite anthropology instead of a traditional biblical understanding of human nature as a duplex of body and spirit/soul, although his overall approach for each problem behavior does not suffer too greatly from this flawed anthropology.

Second, while the biological data—some human and some animal—is fascinating, some chapters are more persuasive to me than others in describing the biological basis of the behavior in question. It’s not always clear if the biological realities he describes are cause or effect. In addition he sometimes reads biological observations back into the Scriptures anachronistically; for example, he sees the “one flesh” marital union described in Scripture as the result of “increased levels of oxytocin and vasopressin in the brain that bring about emotional bonding” (p. 57), and he views the rebellious son of Deut 21 as an example of antisocial personality disorder, which he concludes is further evidence of an underlying biological basis to this problem.

Third, while he asserts, “Through Christ, real change is possible” (p. 43), he describes this at only a superficial level. He focuses on accepting that God loves his people and that sin no longer has power over the believer. This is true, but what does internalizing and living out these realities look like over the ups and downs of life for the long haul? He highlights the importance of personal devotions and accountability with other believers, but he provides little fine-grained help for the struggler who wants to overcome sin. His use of Scripture sometimes has a “proof-texting” feel to it, rather than exhibiting a rich biblical-pastoral treatment of the problem at hand. In the end, he doesn’t really blend the biological and spiritual perspectives into a nuanced ministry approach.

All in all, I would recommend The Biology of Sin as a helpful and interesting ministry resource with the aforementioned caveats. I commend Stanford for exploring the complex nexus between the bodily and spiritual aspects of our personhood and for reminding us that wise pastoral care must include careful attention to both biological and moral-spiritual aspects of sin.