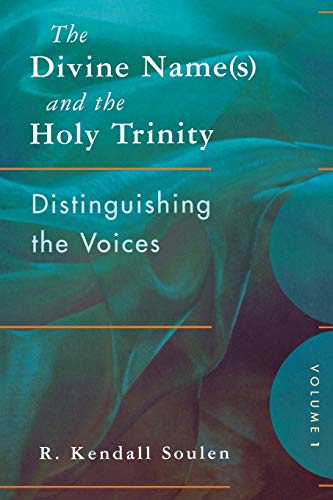 The Divine Name(s) and the Holy Trinity: Distinguishing the Voices

It seems to some of us that theology has long been captive to what Whitehead called ‘adventures of ideas’; its mood is Athenian, even when its pretensions are Christian (no reflection on Whitehead himself). But occasionally a volume appears which dignifies the name of theology, introducing a novelty which is not in the service of novelty, but presented on the basis of deep and honouring reflection on the biblical texts. Such is Kendall Soulen’s book. It is in order, from the outset, to praise its excellence, both in substance and as a model for theological work.

It is the first of two volumes, unpretentiously describing its aim as an exploration ‘of the doctrine of the Trinity through an analysis of names’ (p. ix). Stimulus is afforded to this task by the emancipation of women, the growth of the Church in the Southern hemisphere and the question of the relationship between the Church and the Jewish people. However, discussion is ordered not to these phenomena, but to the biblical witness and the history of Trinitarian theology, particularly to the former. ‘The central hunch of this book is that Christians name the persons of the Trinity most adequately when they take into account three different patterns of trinitarian naming’ (p. 21): a theological pattern, which attends to the Tetragrammaton; a christological pattern, which identifies the trinitarian persons as Father, Son, and Spirit; and a pneumatological pattern, the naming here being various and the fruit of the myriad contexts in which the Church finds itself. The book spells out just what all this means. At its heart is the discernment that we have overlooked the significance of the Tetragrammaton, insufficiently grasping its dimensions in the OT, missing its presence in the NT and losing it for the most part along the track of historical theology (Aquinas outstandingly proving something of an exception.) But this negative description does injustice to the spirit of Soulen’s investigation, which is constructively uninterested in casting aspersions.

What exactly do we mean by these three patterns? The argument is that, while it seems that the most appropriate way to name the persons of the Trinity is ‘Father, Son, and Spirit’, close attention to the biblical text indicates that this is an appropriate, but not the only appropriate way. ‘In every place where I cause my name to be remembered I will come to you and bless you’ (Exod 20:24): Soulen takes his hermeneutical steer from this text, for ‘[a]t bottom . . . everything the Christian canon tells us . . . is an elaboration of the patterns encoded in this verse’ (p. 134). God’s name enshrines his uniqueness, presence, and blessing. When we listen attentively to the NT witness, we become attuned to the different voices of the different divine persons. Reflecting on what we hear, we find that ‘[t]he first person declares the divine name in a way that has special affinity with the manifestation of divine uniqueness, the second with the enactment of divine presence, and the third with the bestowal of divine blessing’ (p. 164). What is striking about the way in which Soulen develops this analysis is his ability to integrate it into a profound christocentricity. He is sensitive to the claim that the christological pattern of trinitarian naming—God is Father, Son, and Spirit—should have priority and thus, in the concluding chapters of the book, examines different dimensions of Jesus Christ’s speech about God, about himself, and about the Spirit. This thesis is delivered in such a way that the volume comprises a sustained tour de force.

There are two lines of criticism that we should not leap to pursue. The first is that the very neatness of the pattern Soulen discerns makes it suspect. The author has been careful here, and we shall have to be as careful as he if we attempt a demonstration that his exegetico-theological scheme is, overall, selective and contrived. The second is that it will mandate (as, it will be supposed, the next volume is bound to reveal) undesirable and uncontrolled naming of God in the name of the pneumatological pattern detected in the Bible. Soulen is not an author who will fall easily for this.

However, that is not to say that we should forget these lines of criticism; what is required is fidelity to the adage that we look before we leap. It seems to me that he makes a more convincing case for the neglected significance of the Tetragrammaton for trinitarian theology—and this is a far-reaching accomplishment—than for either the mode or the status of the pneumatological pattern of trinitarian naming. But it is a virtue of this book that it forces us to ask ourselves whether or to what extent this is more a reflex reaction conditioned by a theology which we bring to this volume than the product of a dispassionate judgement on the basis of evidence presented in it. However impatiently we greet the reviewer’s customary truism that a review cannot do justice to the book reviewed, it just has to be reiterated in this case. In order to be clear about the substance, let alone the force, of what the author contends, we should need to read the book itself, but I doubt if it is a book that should be definitively judged after only one reading. It is difficult to imagine that fruitful trinitarian theology in the future can avoid coming to terms with at least the elements of Kendall Soulen’s proposal.