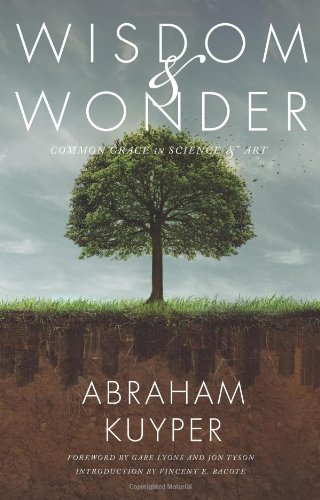 Wisdom and Wonder: Common Grace in Science and Art

Although many Christians know about Abraham Kuyper, a much smaller number have actually read his works. This volume promises to change that, fueling a more popular readership and broader exposure to Kuyper's theological framework for cultural analysis.

Wisdom and Wonder represent a series of popular articles on science and art that were eventually collected, bound, and released in 1905 as Common Grace in Science and Art (De Gemeene Gratie in Wetenschap en Kunst). The editors of this newly translated English edition attempt to keep this popular appeal in mind by providing Kuyper's original work with a new title (Wisdom and Wonder), a handsome cover, short readable chapters, user friendly sidebar quotes, and a thematic illustration for each chapter. With a foreword, introduction, and endorsements by contemporary English speaking writers and scholars working in the Kuyperian tradition, this volume is a popular introduction to Kuyper's cultural theology, particularly as it navigates such challenging arenas as science and art.

Importantly, Kuyper's focus is not science and art per se, but rather the theological foundations for Christian engagement in these two fields. Here he makes ample use the doctrines of creation, the imago dei, the cultural mandate, sin, and, most importantly, his theology of common grace. Although thinking about science and art have developed significantly since Kuyper delivered these essays, the theological foundations Kuyper offers still deserve careful theological consideration.

In his treatment of science, Kuyper develops the fracturing power of sin to destroy a coherent, integrated picture of the world. To do this, Kuyper examines the philosophical assumptions of naturalism and empiricism that have taken hold of the natural sciences. Regarding the former, Kuyper reminds us that evolution is not sufficient for a naturalist account, since the theory merely pushes the question back to the origin of the conditions that made the process possible. Regarding the latter, Kuyper challenges the idea of a neutral observer, questioning the existence of observers who act as merely “elegant photographic cameras” (p. 66). Along the way, Kuyper introduces some important philosophical distinctions, such as between “seeing” and “seeing as” (p. 64). These further buttress Kuyper's claim that positivistic accounts of scientific knowing have neglected the human person, who is irreducibly “spiritual.” Those familiar with philosophy of science will recognize Kuyper's reclamation of the human subject as anticipating later work in the philosophy of science, such as the work of Michael Polyani and Paul Feyerabend.

Kuyper's discussion of art orbits a theology of beauty, art and worship, mimesis, creativity, and the artist as imago dei­-all themes to be picked up and discussed later by neocalvinists Herman Bavinck, Hans Rookmaaker, Calvin Seerveld, and Nicholas Wolterstorff. Although Kuyper's accent on beauty as the central criteria for artistic excellence has been controversial in the twentieth century, his defense reminds us that any theological account of art that rejects beauty is equally problematic. The issue of beauty aside, Kuyper's discussion of art provides a number of commendable moves, such as his support for the democratization of the arts, his affirmation of the role of the imagination, his critique of art for art's sake, and his defense of Christian culture-making as critical for enriching human life.

As with other writers in the late Victorian era, Kuyper displays traits characteristic of this period. These include a tacit colonialism when speaking of “primitive” societies (p. 60) and a penchant for dualisms between “higher” and “lower” realms in science and art (pp. 79, 118). Yet even here one can appreciate how Kuyper's theological development puts such assumptions in tension. Victorian binaries are strained when introduced to a theology of creational “multiformity,” and his view of the universal imago dei is at odds with his Eurocentrism.

These anachronisms aside, readers will be surprised by the relevance of this volume and how prescient-even prophetic-many of Kuyper's insights are. For example, precipitating thinkers like Thomas Kuhn, Kuyper speaks of the critical role of communities in these fields, arguing that the social structures that create such communities of learners are, in fact, a divine gift. Clearly, Kuyper provides a compelling theological account for not only gifted individuals, such as the Steve Jobs and Francis Alÿs's of this world, but also the social and cultural structures that make the blessings that come to us through the sciences and arts possible.

The dominant theme that emerges throughout the volume, finding its support in more than one of his theological loci, is Kuyper's defense of the independence and integrity of science and art. It is right, Kuyper assures us, that these ventures came out from under the umbrellas of church and state. Behind his argument is not only a vision for public space, but also a pastoral concern that believers not abandon these important endeavors. Kuyper wrote these words in hope that believers would recognize that although these fields were not free from the curse of sin, they still were upheld by God's grace, thereby legitimating Christian participation. Undoubtedly, this newly released translation will continue to encourage Christian engagement in the challenging arenas of science and art.