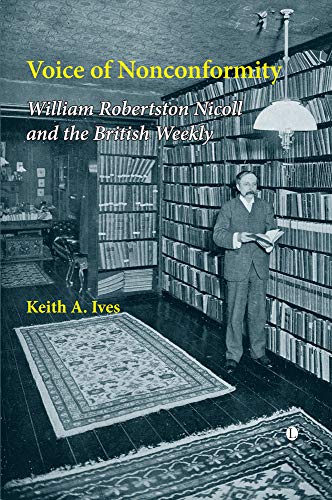 Voice of Nonconformity: William Robertson Nicoll and the British Weekly

Readers fascinated with late Victorian religious history will find in this book an in-depth account of the gradual unraveling of evangelical orthodoxy in Britain as Protestant faculties of divinity and pulpits demonstrated how the “tide” was receding, drawn by the pull of German criticism. The story is told through the lens of the Scottish minister-cum-literary editor, William Robertson Nicoll (1851-1923); he left the North while still a young pastor in search of a milder climate that would spare him from the pulmonary ailments that had already claimed the life of his mother and brother.

Already an author of popular Christian works while in his pastoral ministries in the North, Nicoll turned to religious editing in England in order to support his growing family. Soon there began the editorial relationship with Hodder (later Hodder & Stoughton) that was to endure as long as he lived. Readers of Themelios will be interested to find that it was Nicoll the entrepreneurial commissioning editor whose hand can be detected when they take up century-old standard volumes such as the Expositors Greek Testament (4 vols.) and the multi-volume blue-bound Expositor's Bible. He commissioned and edited them all.

But the thrust of the Ives volume is not literary antiquarianism, that is, tracing out the story behind old books once intended for the minister's library; it highlights Nicoll's role as the literary middle-man for newer “views” of two kinds. One of these (the better known, to be sure) would eventually leach away dogmatic certainty from Britain's broadly evangelical Protestant churches in the space of two generations. In sum, Nicoll is depicted as the one who while of fairly conventional evangelical views himself, was forever casting about to find biblical commentators and theological writers who were only moderately infected by the burgeoning critical views that were flooding Britain after 1870. Given his own Scottish upbringing, education, and ministerial service, it was no surprise that through the agency of Hodder & Stoughton, Nicoll soon drew to the wider attention of British (and American) readers still-honored names such as Alexander MacLaren, A. B. Davidson, George Adam Smith, and James Denney-the gradual effect of whose literary labors eventually contributed to the diminution of evangelical certainty.

Ives, the researcher and biographer, is not without admiration for Nicoll, yet it is hard to escape the impression that the author believes that Nicoll was a kind of “weak link” who, while maintaining his own evangelical certainty, “bent” rather than withstood the challenges of his time. Nicoll's reliance on the “moderately critical” was, on this understanding, a colossal miscalculation. Such an interpretation, while now almost the conventional wisdom among conservative evangelicals, does beg the question of who were those articulate able theological conservatives in academia, in the age of theological downgrade, on whom Nicoll might have been relying instead. When one reads the treatment of this period in other recent monographs such as Mark Hopkins' Nonconformity's Romantic Generation (Paternoster, 2003) and Alan F. P. Sell's Hinterland Theology (Paternoster, 2008), one instead reaches the conclusion that Nicoll actually did his best with the personnel at hand. A somewhat “liberalized” evangelicalism seemed to him and to many others to be the way the future was unfolding. It was not until an unforeseen conservative theological reaction (which, as for Britain, we might date to the founding of the Cambridge Inter-collegiate Christian Union-the precursor of IVCF) spontaneously arose in 1910, that there was concrete reason to expect otherwise.

But I have spoken of Nicoll as literary middle-man in two senses, and the latter of these-though less well known than the first-may indeed have been the greater of the two. And Ives's drawing our attention to this may be the greater service provided by his biography. Ives makes clear that Nicoll, the expatriate Scot, assisted in marshaling both Scottish and English Nonconformist religious, social and political thought into a formidable political constituency through his editorship of the British Weekly, for almost a century a powerful print organ serving as a literary link for Britain's non-Anglican churches.

The BW, taking its rise in 1886 at a time when Britain's non-Anglican (or “Free Church”) Protestants were coalescing, politically, in support for the rising national Liberal party, became a powerful organ under Nicoll's founding editorship. It disseminated both the troubling theological views emerging within this constituency and the socio-political aspirations of these rising middle classes at a time when they were chafing under longstanding inequities (especially in education). In a masterly treatment of the unforeseen bitter fruits of the intermingling of politics and religion, Ives shows that the Nonconformist pursuit of national political voice as the nineteenth century ebbed served, as decidedly as the disseminated critical views of the Bible, to divert Nonconformity away from its traditional values.

The election of the Liberals to form Britain's parliamentary government in 1906 secured for that party and its largely Nonconformist constituency political ascendancy in the decade before the nation was plunged into World War in 1914. Thus, the final decade of Nicoll's life and literary labors was preoccupied more and more with social and political questions, less and less with gospel concerns. This was a doubly bitter development in that the Liberal party (which entered into a wartime coalition with the Conservatives) would both lose credibility by its over-association with the drudgery of World War and political ground to the rising Labor Party. And the latter, which represented the aspirations of the working classes, was a constituency far less oriented to Christianity than the fading Liberal-Nonconformist alliance.

In the end, we are shown that Nicoll was, over time, caught in a double editorial miscalculation: he wrongly calculated that a liberalized evangelicalism would sustain itself (when it would prove incapable of doing so after 1920). He was equally wrong in calculating that Nonconformist Christianity in Britain would reap only benefit by its ever-closer relationship with the Liberal party. The Liberals experienced a precipitous post-war decline lasting more than half a century, leaving Nonconformity “widowed.” Modern evangelical readers of this tale will be inclined to pay the greater attention to Nicoll's misreading of the theological tea leaves; Ives' researches suggest that they should instead ponder how, under Nicoll's editorial leadership, Nonconformity paid just as dearly for its injudicious political alliances.