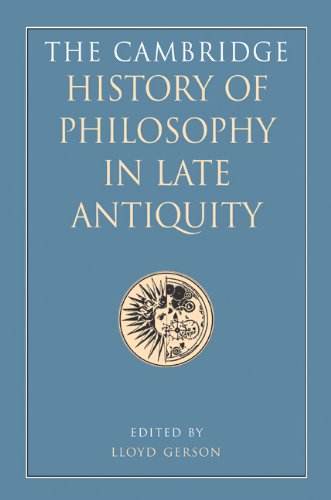 The Cambridge History of Philosophy in Late Antiquity

The fact that an early marginalized movement that gathered itself around shared remembrances of the earthly Jesus and the infamous Theodosian decrees of 391 can share the same name is testimony to an intriguing historical phenomenon of Christianity on both sides of the spear. In other words, how Christianity as a movement, marginal and insignificant as its origins might have been, developed into a kind of establishment represents one of the more complicated historical puzzles that has occupied historians for centuries.

The relevance of this is in tracking early Christianity's sprawling experimentation of explicating its own identity within the shifting imaginaries in which it found itself. Sadly, the resources of early Christian thought and theologies of the political and the self are rarely used by pastors, research students, and professors at the seminary level who are engaged in more or less analogous pursuits. Part of this neglect is owing to the relative inaccessibility of the material and to the lacuna of Protestant seminary curricula. Church history for us tends to begin with the Reformation and recourse to Augustine and others as sorts of precursors. Moreover, when the material is consulted, it tends to be abstracted from its wider philosophical milieu and environment. In any case, this functional neglect of early Christianity's struggle to come to terms with its confession and mission is to our detriment. We would be better cultural critics, better missiologists, better theologians of the moment if we took notice of the conversations buried within the early centuries of the Christian church.

It is within this context that the edited volumes by Lloyd P. Gerson, The Cambridge History of Philosophy in Late Antiquity (CHPLA) proves invaluable. These two volumes contain over forty specialized essays by leading experts on philosophical issues and philosophers of significance ranging from the period 200-800 CE. The volumes were designed to be the “successor” to the earlier The Cambridge History of Late Greek and Early Medieval Philosophy edited by A. H. Armstrong in 1967. Since the forty-odd years of its respective appearance, however, an overwhelming amount of material has come to light. CHPLA in this sense builds upon (and in some cases repairs) the foundation of this earlier collection.

The two volumes consist of forty-eight essays divided into eight larger parts (parts 1-5 appear in vol. 1, and parts 6-8 in vol. 2):

A brief orientation introduces each main part and proves helpful in getting a sense of such new material. The volumes also contain an appendix that includes a complete digest of philosophical works known to have been written during the period under consideration (pp. 915-65). There are also significant bibliographies consisting of primary and secondary literature for each chapter printed at the end of the second volume (pp. 983-1182). Helpful, too, are the Index locorum (pp. 1183-1248) and General Index (pp. 1249-84) for navigating specific texts or themes. It was surprising to discover the complete lack of illustrations, timelines, and so on. The two general maps at the head of volume 1 make this oversight even more striking. Nevertheless, CHPLA is a remarkable achievement. The cost might be prohibitive, but if you are able to talk your librarians into securing a copy, the investment will surely prove itself.