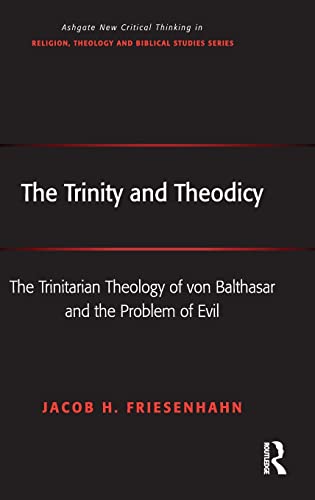 The Trinity and Theodicy: The Trinitarian Theology of von Balthasar and the Problem of Evil

The task that Friesenhahn sets before him is articulating a distinctly Christian, Trinitarian theodicy by bringing Hans Urs von Balthasar's doctrine of the Trinity to bear on the so-called “problem of evil.” Engaging in a theodicy is not a misguided enterprise that entails subjecting God to human standards of justice, avers Friesenhahn, but a legitimate and necessary pursuit of affirming God's justice in the face of pervasive evil. Friesenhahn finds unsatisfactory pat answers such as “evil is necessary for the recognition of good,” “evil is a pedagogical tool for spiritual betterment,” “evil is punishment for sin,” and even the free-will defense.

Chapter 2 overviews treatments of the challenge of evil in analytic philosophy. Attention is given first to David Hume and his highly influential Dialogues Concerning Natural Religion (1779). For a direct and powerful attack on the free-will defense, Friesenhahn next turns to J. L. Mackie, who asserts the possibility of a world in which all persons would choose both freely and rightly. Next, Friesenhahn gives Alvin Plantinga a hearing in his (1) rebuttal of the contention that evil logically disproves theism and (2) affirmation of the free-will defense against Mackie's challenge.

In the next section of his survey, Friesenhahn turns to the theodicies advanced by philosophers of religion John Hick (Irenaean), Eleonore Stump (Thomistic), and Marylin McCord Adams (divine suffering). Careful exposition is followed by fair evaluation. In the end, all positions are found wanting.

Chapter 4 turns to the Bible to uncover the resources for addressing evil. The biblical overview focusing on the question of evil is clear, punctuated by pithy fragments of theological interpretation and stirring exhortation. It interprets key portions in Scripture, helpfully highlighting features such as the inherent goodness of God's creation, the dire consequences of sin, and the centrality of providence manifested in God's ability to bring good out of evil.

After the foray into analytic philosophy, philosophy of religion, and Scripture, Friesenhahn lays out Hans Urs von Balthasar's theology of the Trinity, which he uses to articulate a Christian theodicy that purportedly avoids the shortcomings of the theodicies already presented.

In Balthasar's view, the essence of the Trinity is interpersonal kenotic love. The Father generates the Son in a continual act of self-donating love, while the Son's being consists of his incessant offering of himself, eucharistically, back to the Father. The Spirit results from these intersecting movements as the seal of perfect mutual love. The entire economy, and particularly Christ's death and descent into hell, is for Balthasar the manifestation of the inner-Trinitarian life of love. The kenosis of the incarnation, cross, and descent of Christ is the extension of the eternal kenosis that takes place in the immanent Trinity. In short, salvation history is the eternal drama of the Trinity acted out economically. Alert theological minds will have picked up the Moltmannian echo in these lines. But Friesenhahn is keen to stress that Balthasar, despite undeniable similarities, treads a different path than does Moltmann. Both agree that the cross is an inner-Trinitarian event, revelatory of God's Triune nature. However, contra Moltmann, Balthasar excludes the idea that God's Trinitarian nature emerges historically.

One of the most striking aspects of Balthasar's theology of the Trinity, which Friesenhahn employs as the pillar of his theodicy, is the notion that the immanent Trinity, and more specifically, the so-called “infinite distance” that exists between the divine Persons, is the ground of the possibility of evil and suffering. Balthasar writes, “The distance between the Persons, within the dynamic process of the divine essence, is infinite, to such an extent that everything that unfolds on the plane of finitude can take place only within this all-embracing dynamic process” (Theo-Drama [San Francisco: Ignatius, 1998], 5:245).

Building on John Paul II's description of suffering as belonging to the essence and mystery of humanity, Friesenhahn then brings Balthasar's theology of the Trinity to argue for the instrumental value of evil and suffering. We are told that suffering, when united to Christ, acquires salvific meaning, enables participation in the redemptive suffering of Christ, and facilitates a sacramental participation in the life of the Trinity (theosis).

Friesenhahn ends his constructive section with a look at William P. Young's immensely popular novel The Shack, which he describes as offering a narrative theodicy that illustrates Balthasar's thought on the Trinity as inter-personal kenotic love.

The final pages of the book are dedicated to the problem of natural evil. The author briefly surveys and rejects the natural theodicies on offer and admits that Balthasar's thought cannot be applied to animal and natural evil, and he leaves finding a compelling solution as the object of future theological reflection.

Some critical comments are in order at this point. The first worrying suggestion, pertaining to Balthasar's thought, is that the “infinite distance” between the Persons of the Trinity is the ground of the possibility of evil and suffering in the world. This is one of the main pillars in Friesenhahn's theodicy. He is quick to clarify that it is the possibility of evil, not evil itself, that is grounded in the divine nature. It is far from clear, however, how a positive distance between the divine Persons, problematic as the language of distance already is, entails the possibility of negative distance and evil. Furthermore, we learn that the finite distance between God and the world, with all the potential for negativity included, subsists within the infinite distance between Father and Son. Logically, the world, even its sinfulness, is closer to the Father than the Son. The absurdity of such reasoning is astounding.

The most worrying move that Friesenhahn makes is his sweeping domestication and instrumentalization of evil. Evil is shorn of its negativity and positively instrumentalised. Here is Friesenhahn in his own words: “Human suffering united to Christ is meaningful as grounded in the Triune God, and thus grounded, human suffering transports man beyond himself through the Son in the Spirit to the Father” (p. 141). It is not just suffering resulting from persecution that has meaning and purpose (Col 1:24), but suffering in general is presented as meaningful when united to Christ. Nothing is said of how exactly suffering can be united to Christ's past and completed suffering. Furthermore, even if we grant the validity of the point, a further complication arises. If the universal experience of suffering is to acquire salvific meaning and purpose, the cross must be universally effective in realizing redemption. In other words, universalism must be true. Otherwise, Friesenhahn is speaking merely of “evil endured” (Blocher) by followers of Christ, namely, persecution. No distinction is made, however, between evil and suffering universally experienced and persecution-related suffering.

In the final pages of the book, after a positive appraisal of The Shack, Friesenhahn presents an admission that, we argue, undermines his entire thesis. In referring to the impossibility of instrumentalizing certain debasing and dehumanizing forms of suffering, he says, “speaking of the victim as able to choose to make certain use of his or her suffering may well not be the most appropriate form of discourse” (p. 162). With this concession, Friesenhahn has made it clear that the proposal he has put forward, even if found to be theologically coherent and existentially compelling, has a much more limited scope and, consequently, cannot be regarded as a solution to the problem of evil and suffering universally experienced, which is what solutions to the problem of evil are generally understood to be.