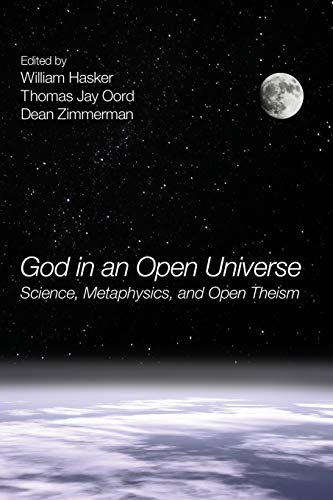 God in an Open Universe: Science, Metaphysics, and Open Theism

This is a companion volume to Thomas Jay Oord's Creation Made Free (see this issue for review). This contains seven papers. Whereas the previous volume contains essays by panentheists and process theists, this one is genuinely committed to open theism. The authors here are committed to the notion that God is free to create a universe or refrain from doing so. Also, they are more modest about where science in fact leads. The authors in this book acknowledge that theology and science are very complicated domains that contain vast networks of theories. As such, there are areas of science that may fit equally well with several broad theological positions.

William Hasker's “The Need for a Bigger God” discusses the need for a religiously adequate conception of God. The conception must be adequate in that it is consistent and takes account of current science, but it must also be religiously adequate in that the Christian God is deeply personal. Hasker's essay starts out arguing that open theism has a more adequate conception of God than its rivals, but then he seems to get lost on a tangent defending his emergent dualism. He argues that (2) God would make creatures with libertarian freedom, (2) emergent dualism fits well with evolution, and (3) open theism offers the best account of God and the God-world relation. Hasker points out that these three theses fit together nicely but that they are not logically entailed by one another.

Jeffrey Koperski's “Metatheoretic Shaping Principles: Where Science Meets Theology” offers an excellent overview of basic issues in the history and philosophy of science. The structure of science is today typically held to involve three layers. First, there is the layer of observation and data. The second layer is more abstract and involves theories and laws that try to account for the data. The third layer involves metatheoretic shaping principles (MSPs). These are basic principles one uses to determine which theories, laws, and models of reality are adequate. These involve basic metaphysical and epistemological assumptions about reality such as the uniformity of the laws of nature and explanatory virtues in scientific models. Koperski does an excellent job at spelling out these ideas and the roles they have played in the history of science and theology. He notes that there are two MSPs that conflict with open theism: universal deterministic causation and global scientific realism. After discussing various options that open theists can take to get around this conflict, he makes a very important point in regards to science and theism. These two MSPs conflict with theism in general because the differences between open theism and classical theism are not that relevant when it comes to the relationship between science and theology. There are other factors that shape one's overall metaphysics, and it is one's overall metaphysics that determines how one will deal with specific issues in contemporary science.

David Basinger's “Religious Belief Formation: A Kantian Perspective Informed by Science” discusses issues related to religious belief formation and neurophysiology. There are several factors that deeply shape the way human persons develop and retain beliefs such as one's genetic dispositions and cultural background. Despite such things, it is still the case that a person can come to modify her beliefs when she is confronted with internal inconsistencies within her web of beliefs as well as counterevidence. Basinger attempts to draw out the implications of these scientific findings for religious belief, education, and religious tolerance.

Alan Rhoda's “The Fivefold Openness of the Future” lays out five senses in which the future is open. The future is causally open in that there are several possible futures. It is ontically open in that the future does not yet exist. It is alethically open in that propositions about the future are neither true nor false. The future is epistemically open in that no one can know which future states of affairs will obtain. Finally, the future is providentially open in that the future states of affairs are not exhaustively ordained. Rhoda attempts to argue that if one accepts certain assumptions, these five senses of the open future stand or fall together. If he is successful, he has narrowed the options for theists to take: one either holds to open theism or theological determinism. Molinism and other forms of free will theism are out if the argument goes through. In order to get around the argument, Rhoda claims that one must deny one of the following assumptions: knowledge entails truth; truth supervenes on being; no partial future exists; God has an exhaustive acquaintance with reality; God knows all truths; and God sustains the world in existence. It seems to me that the most likely assumption for a free will theist to jettison would be truth supervenes on being. Several philosophers, like Trenton Merricks, have argued against it on non-theological grounds. Merricks's recent work has not only argued against the claim that truth supervenes on being; he has also used this to develop a defense of Molinism.

David M. Woodruff's “Presentism and the Problem of Special Relativity” and Dean Zimmerman's “Open Theism and the Metaphysics of Space-Time” deal with what is probably the biggest conflict between open theism and contemporary science. On the standard interpretation of the Special Theory of Relativity (STR), the past, present, and future are all said to have equal existence. For those of you who are in America, you are not currently in Scotland like I am. Yet Scotland exists just as much as America does. In a similar way, on STR, the past and future are said to exist just as much as the present does even if you do not happen to be located at those times. Here is the rub for the open theist: the open theist is typically committed to presentism-the view that the past no longer exists and the future does not yet exist. (On a side note, classical theologians historically all held to presentism as well.) One character trait of open theism is that since the future does not yet exist there is nothing for God to know about the future. As such, God does not have foreknowledge. STR calls all of this into question.

Woodruff's paper does a fine job at explicating the problem and articulating possible solutions. Yet the solution that he offers is unsatisfactory. He argues for a position where there is no unique present moment of time, but he wants to continue to call this presentism. As an unrepentant presentist, I was utterly baffled as to how Woodruff's proposal could still count as presentism. Zimmerman's paper does not suffer from this problem. He offers a novel way of understanding STR while still preserving presentism. He also critiques other accounts that seek to reconcile STR with presentism (e.g., William Lane Craig). Yet Zimmerman makes an interesting point that I myself have often wondered about: we know that STR is false. It makes false predictions and ignores the effects of gravity. A major project of contemporary physics is to develop a new fundamental theory through either the General Theory of Relativity or Quantum Mechanics. So I have to ask: Why should the presentist be concerned with STR?

Robin Collins ends the book with “Prayer and Open Theism: A Participatory, Co-Creator Model.” Collins offers an interesting discussion on the nature of participatory prayer. He first argues against naturalistic accounts that view prayer as something akin to the placebo effect. Then he critiques theological determinist and Molinist accounts, before laying out his co-creator model. He also examines tough questions about unanswered prayer and why God requires prayer. I simply cannot do justice to the rich conversation that Collins offers. Instead I will simply say that this paper contains all of the hallmarks of Collins's other writings: clarity, intellectual rigor, sensitivity to biblical theology and spirituality, and a deep awareness of science.

All in all, this book is one that ought to be taken seriously by theologians and philosophers. It will be a difficult read for those who do not have a background in philosophy. However, it offers one of the best defenses and articulations of open theism to date, and I imagine it will spark much discussion in contemporary theology.