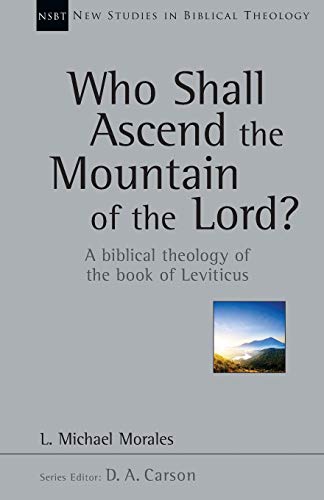 Who Shall Ascend the Mountain of the Lord? A Biblical Theology of the Book of Leviticus

The book of Leviticus continues to receive sustained academic attention, yet it also represents the object of many laypeople’s neglect. With this latest addition to the New Studies in Biblical Theology series, L. Michael Morales attempts to bring these disparate worlds together by making cutting-edge Leviticus scholarship accessible to non-specialist readers. The result is a rare treat, for biblical theologies of Leviticus are scarce indeed. Even those works which approach Leviticus in relation to its wider Pentateuchal context (e.g., C. Nihan, From Priestly Torah to Pentateuch: A Study in the Composition of the Book of Leviticus, FAT 2/25 [Tübingen: Mohr Siebeck, 2007]) do not explore in any substantial way its reception in the NT. Thus, by building on and extending doctoral research completed under Gordon J. Wenham (see L. M. Morales, The Tabernacle Pre-Figured: Cosmic Mountain Ideology in Genesis and Exodus, BTS 15 [Leuven: Peeters, 2012]), Morales fills a notable void in current Leviticus literature.

Who Shall Ascend is divided into eight chapters. The first three of these establish the broader literary context for a final-form reading of Leviticus. Chapter 1 surveys several approaches to the Pentateuch, with Morales concluding that the primary theme of the corpus concerns Yahweh’s opening of a way for humanity to dwell in the divine presence (p. 23). Accordingly, and in line with much contemporary discussion, chapter 2 argues that creation in Genesis 1 is best envisioned as the formation of sacred space (pp. 39–49). Thus it is exile from, and potential return to, this locale and the presence of God therein which drives the central plotline of the Torah. Thus understood, the book of Genesis becomes a story of increasing separation from God which ends in the “grave of Egypt” (p. 74). Chapter 3 suggests that the book of Exodus reverses this separation: “The book of Exodus . . . narrates how Israel is reborn out of this grave and ushered into the divine Presence, reversing the movement of Genesis” (p. 74). The importance of the tabernacle for this reversal obviously looms large. Morales helpfully explores the issues here at some length, especially in relation to the tabernacle as a portable Mt. Sinai (pp. 95–100) and as a return to Eden (pp. 100–103).

Chapters 4–6 treat Leviticus in three sections—chs. 1–10, 11–16, and 17–27, respectively. Here, Morales focusses on segments and themes which elucidate the Leitmotif of dwelling in the divine presence, and seeks to relate these to the wider literary context examined in chapters 1–3. For instance, against the backdrop of the Pentateuch’s storyline the high priest’s entrance into Yahweh’s presence on the Day of Atonement (Lev 16) is reckoned a “liturgical drama” which portrays a re-entry of Eden (p. 173). Similarly, the cleansing of the tabernacle on this day is viewed as an eschatological hint that the cosmos will one day be cleansed—finally restoring the global-level sacred space of Genesis 1 (p. 171).

The aim of chapter 7 is to tease out how the cultic theology of Leviticus is developed in the remainder of the OT. Particular attention is given to the theological significance of Zion as the locus of divine blessing (pp. 224–237), and to the theme of exile and restoration (pp. 236–254). The pervasive idea of God’s presence is once again highlighted: “To gaze upon his splendour, upon his face—this one thing is both the end and the fount of Israel’s most profound longings and doctrines” (p. 254).

Finally, chapter 8 moves discussion into the NT. Here Morales notes that, while atonement cleansed the model cosmos (i.e., the tabernacle), it did not cleanse the cosmos itself. Thus a central NT question becomes, How does the Son make possible entry to the heavenly abode of God? In light of the previous seven chapters, the ministry of Christ takes on added depth and meaning. This provides a fitting conclusion to the volume as Morales highlights how Jesus enables those united to him to “ascend the mountain of Yahweh” and to enjoy the blessing of his presence.

There is much to commend in Who Shall Ascend. In line with the aims of the series, the volume attempts a synchronic reading of Leviticus in its canonical setting. Source- and form-critical debates—somewhat onerous topics for students and non-specialists—are thereby placed into the background. This is apposite for a volume such as this and has the added advantage of allowing Morales to concentrate on other more recent trends in Pentateuch scholarship—for instance, the hermeneutical importance of narrative progression for reading the Torah. This is played out in an excellent discussion of the narrative setting of the Pentateuch’s legal material (pp. 111–121). Furthermore, on numerous occasions Morales helps readers navigate tricky conceptual ground—gradations of holiness, clean/unclean distinctions, and the like (e.g., pp. 153–167). Moreover, in similar manner to his 2012 monograph, Who Shall Ascend is filled with nuggets of exegetical gold—the fruit borne from prolonged engagement with the biblical texts. For students, pastors and specialists alike, therefore, there is much here to stimulate further thinking on this vital OT book.

However, as with any volume, not all points are equally persuasive. For example, some readers will not be convinced of Morales’s treatment of hand-leaning, blood manipulation and sacrifice (pp. 127–37). He concludes that the cultic burning of sacrifices functioned to transfer not only the animal into the heavenly realm, but also the worshipper vicariously through it. While interesting, Morales’s argument requires more detailed analysis to support his claim than is possible here. Another area that may not convince lies in connection with the various symbolisms outlined by Morales. Symbolic readings are notoriously fraught with difficulties, especially in relation to avoiding the charge of subjectivism. While Morales’s reading of Leviticus symbolism is helpfully constrained by his focus on Pentateuchal context and the intertextual allusions he identifies, I suspect not all readers will be happy to go as far as he does at times. So although an understanding of the tabernacle as symbolic of Eden is common, less so is Morales’s conjecture that “the later high priest of Israel serving in the tabernacle must be understood fundamentally as an Adam-figure serving on the (architectural) mountain of God” (p. 53).

In the end, however, these are minor quibbles in what remains a persuasive and perceptive exploration of Leviticus in its canonical setting which, in the final analysis, has potential to propagate engagement with this oft-neglected book. While the going might be tough in places for the uninitiated, the benefits are more than worth the effort; I have already added the book to my suggested reading for graduate classes. Moreover, Who Shall Ascend offers preachers a broad conceptual understanding of the book that will nicely complement standard commentaries. Perhaps unsurprisingly, therefore, D. A. Carson surmises in his preface that this volume “will spawn some excellent sermon series on Leviticus” (p. 8). Regarding that outcome, this reviewer sounds a hearty “Amen.”